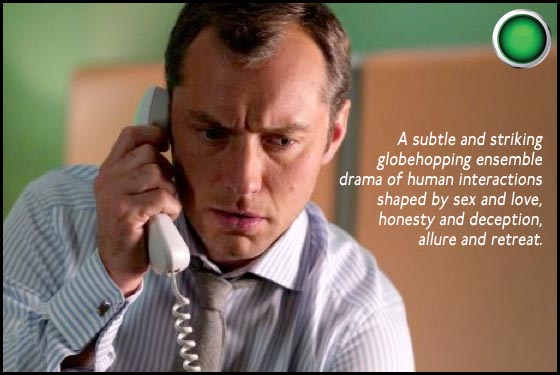 Director Fernando Meirelles (Blindness; City of God) and screenwriter Peter Morgan (The Damned United; The Queen) have teamed up for the first time, and the result is a subtle and striking globehopping ensemble drama of human interactions shaped by sex and love, honesty and deception, allure and retreat. Nearly everything that happens onscreen here is defined by what people do not say to one another: this a sophisticated step up — way up — from, say, Valentine’s Day and New Year’s Eve, and it’s much more delicate and graceful than the film it’s most like, the controversial Oscar Best Picture Crash. From Vienna to Paris to London to Denver, we meet a married man traveling on business (Jude Law: Sherlock Holmes: A Game of Shadows) tempted to stray with a prostitute — “Blanka” (Lucia Siposová) is on her first “date” and nervous about it. We meet a man in Paris (Jamel Debbouze: Amelie) in love, from afar, with a married colleague, and receiving contradictory advice from the therapist and the imam he seeks help from. A woman in London (Rachel Weisz: Agora) is having an affair with a younger man (Juliano Cazarré), whose girlfriend (Maria Flor) finally leaves him in disgust over the affair. There are threads of interconnection between these characters and other that I won’t reveal, for although they are not matters of suspense as the film unfolds, there is a certain narratively pleasant satisfaction to be had in watching the dominoes of human pain and doubt and discontent tumble into one another and affecting one another in ways they never realize and that only we, with our godlike perspective, can appreciate. Most poignant in these respects are Anthony Hopkins’ (Thor) grieving father, long searching for his missing daughter — he reveals, in one extraordinary monologue, the spiritual muscle of “the most powerful short prayer” — and Ben Foster’s (Contraband) recovering sex offender, for whom all human contact is a trial and a temptation. It makes for a provocation meditation on how the choices we make impact others in ways we never realize, and a bittersweet reminder that we are all so wrapped up in ourselves and our own problems that we completely miss the fact that everyone else is as big a mess as we are.

When you purchase or rent almost anything from Amazon US, Amazon Canada, Amazon UK, and Apple TV, Books, and Music (globally), you help support my work at Flick Filosopher. Please use my links when you’re shopping. Thank you!
360 (2012)