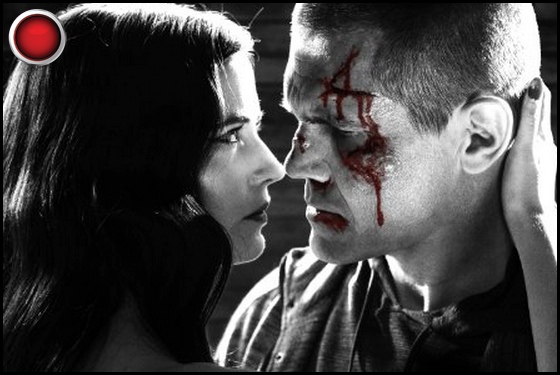 And that’s none of it nice. But it pales in comparison to the nihilism of this latest story about the place, Sin City: A Dame to Kill For. A movie consisting of little more than vignettes on vengeance and cruel parades of sociopathic power performed as gleefully ultraviolent shadowplays. A movie where disjointed parts never connect up into a cohesive whole and instead merely bounce around in a random nasty game of pinball. Is it paradoxical to suggest that even nihilistic stories need a reason to be told? They do for me, at least.

It’s been almost 10 years since the magnificently brutal Sin City, and that’s part of why this unnecessary sequel feels so empty and arduous. Back then, the oozing corruption and despairing hopelessness of Robert Rodriguez and Frank Miller’s CGI-noir portrait of Basin Sin, the hellish world of Miller’s graphic novels, felt excitingly pertinent: we’d been living in that world since at least 9/11, and maybe since the botched U.S. presidential election of 2000. But now it’s another decade on, and the real world has gotten even more unendurably angry, reactionary, and meanspirited in the interim. I don’t need my movies to be all rainbows and fairy dust, but Dame is monstrous and merciless merely for the sake of merciless monstrosity. Even the vigilante violence its characters dish out in search of justice — justice that is, I suppose, meant to make us get some pleasure out of the savagery we’re witnessing — is cold and vacant. Turns out it’s just as difficult to hate cardboard villains as it is to love cardboard heroes.

Dame is all ugly posturing. Mal mots of fatalistic cynicism get no justification in the plot, as with Josh Brolin’s (Guardians of the Galaxy, Labor Day) Dwight, who is the one worrying about letting his monster out,: we never know what his monster is all about. Stories get set up and then go nowhere, like with hulking Marv (Mickey Rourke [Immortals, The Expendables], buried under facial prosthetics), who starts out unable to remember his own name or how he ended up with a bullet in him: we never discover what the deal with the amnesia is, or how or why or even if he remembers. Potentially intriguing characters appear and disappear, having done precisely nothing: who’s the warty, Jabba the Hutt-like crimelord who is incited to go on a rampage and then never shows up again?

For extra bonus vacuity and confusion, the various plot threads here are not happening simultaneously: some are sequels to events in Sin City and others are prequels. I’d never have guessed that not only is Josh Brolin supposed to be the same character Clive Owen played in the first film but that the Brolin version is an earlier, younger one. (I only accidentally discovered this reading some background info on the movie.) Meanwhile, though, the storyline featuring Powers Boothe’s (The Avengers, MacGruber) vicious politician, Jessica Alba’s (Spy Kids: All the Time in the World in 4D, Little Fockers) haunted stripper, and Bruce Willis’s (Red 2, G.I. Joe: Retaliation) sainted cop is clearly following on from events in the first film. But even here, there’s a lack of context or even the briefest of catch-up for those who may not have seen the first film in a while. Worth repeating: it’s been nearly 10 years since the first film. Even the most devoted fans are not going to have the same level of recall as when there’s only a couple of years between films.

It gets so that even the unique visual style of the film seems little more than a gimmick. The black-and-white comic-book atmosphere, created as CGI animation for human actors to wander around in, is splashed with vivid color, mostly of a quite urgent tenor: flames and blood and lipstick and police sirens. Though not always! Sometimes blood splashes white. It often feels more like random underscoring than anything done with a purpose. Dame seems to play with filmmaking toys it doesn’t really understand; both Rodriguez and Miller are credited as directors, though the lack of discipline makes me suspect that what we get is more the work of the far less experienced Miller (The Spirit) than of Rodriguez (Machete Kills, Spy Kids: All the Time in the World in 4D).

On the plus side — pretty much the only plus side — Sin City 2 does feature both Joseph Gordon-Levitt (The Wind Rises, Premium Rush) and Eva Green (300: Rise of an Empire, Dark Shadows), two of the most bewitchingly magnetic actors working onscreen today. They’re never together, alas: that might be too combustible even for Basin City. It’s kind of sad, though, to see Gordon-Levitt’s thread go so desperately nowhere, and Green’s into such toxically clichéd misogyny. What a shame that crashing and burning for no good reason is a tradition in this town. 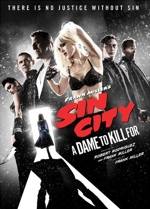 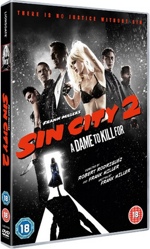 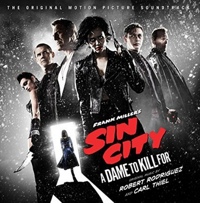 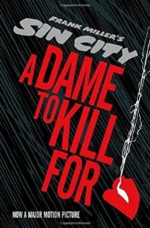 When you purchase or rent almost anything from Amazon US, Amazon Canada, Amazon UK, and Apple TV, Books, and Music (globally), you help support my work at Flick Filosopher. Please use my links when you’re shopping. Thank you!
Sin City: A Dame to Kill For (2014)