One of the most sexist movies I’ve ever seen. Male juvenile fantasy at its most tired, its most obvious, its most banal, and its most infuriating.
I’m “biast” (pro): who doesn’t like a good zombie movie?

It’s not scary and it’s not funny, but this alleged horror comedy does earn one distinction: it’s one of the most sexist movies I’ve ever seen. After a slacker janitor in a biolab accidentally unleashes a zombie plague, three faux Boy Scouts — they are members of the “American Scout Society” — find themselves reexamining their friendship while fighting their way through hordes of the walking undead in their small town, culminating in one of them getting to rescue the girl of his dreams, which, of course, makes her instantly fall in love with him, because that would totally happen. Along the way, when they are not ogling zombie tits — because that would totally happen — they also learn how unbelievably awesome they are even though they are bumbling idiots and not very nice people. Like when Ben (Tye Sheridan: Joe) is reassured by Denise (Sarah Dumont) — the badass and half-dressed strip-club cocktail waitress they end up fighting with, because that would totally happen — that he is really cute; she even lets him practice his kissing on her! Because that would totally happen. Ben’s pal, Carter (Logan Miller: Night Moves), is a nasty piece of work — almost everything that comes out of his mouth is a sexist slur that is treated by the film as adorably crude yet entirely accurate — but he gets to be a hero, too. Conversely, the one character who is perhaps not entirely a terrible person, enthusiastic Scout Augie (Joey Morgan), is treated by the film like shit, almost literally: he’s the one who gets to enact the “hilariously” humiliating (and yet completely gratuitous and utterly unoriginal) explosive-defecation scene. Every zombie movie needs one of those! This is male juvenile fantasy at its most tired, its most obvious, its most banal, and its most infuriating. Boy dorks get to save the day, and their friendship is reaffirmed as stronger than ever while the humanity of women is dismissed. I wanted them all to die horrible deaths.

See also my #WhereAreTheWomen rating of Scouts Guide to the Zombie Apocalypse for its representation of girls and women. 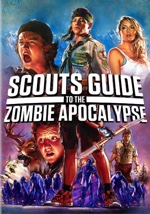 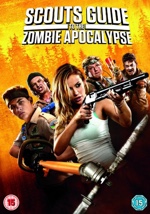 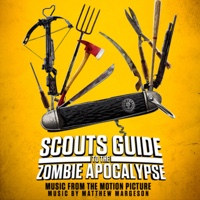 When you purchase or rent almost anything from Amazon US, Amazon Canada, Amazon UK, and Apple TV, Books, and Music (globally), you help support my work at Flick Filosopher. Please use my links when you’re shopping. Thank you!
Scouts Guide to the Zombie Apocalypse (2015)