Invoking fascinating conspiracy theories surrounding Nikola Tesla only to turn them into a macguffin, this neonoir detective flick ultimately disappoints.

A shady Buffalo private detective whose business seems to consist mostly of blackmailing cheating husbands stumbles into a bit of a conspiracy surrounding missing pages from Nikola Tesla’s diaries, landing him in interlocking schemes among nests of villains willing to do anything to get the documents back. If you know anything about Tesla — the scientist and inventor whose work has, in recent decades, become the stuff of myth — you are sure to be hugely disappointed by The American Side, because Tesla is nothing more than a tease here. PI Charlie Paczynski (Greg Stuhr) wanders through a bunch of mysterious deaths and encounters with dangerous dames and accusations by the cops of being involved and nighttime visits from thugs with foreign accents before he even gets to the point of asking who this Tesla guy is anyway. Tesla’s fascinating ideas never get any genuine play: they are pure macguffin, just a thing to be chased, and the plot would be precisely the same if it were about the recipe for the secret blend of Kentucky Fried Chicken’s 11 herbs and spices. Director Jenna Ricker — who wrote the script with Stuhr — does a fine job of aping the look and feel of noir gumshoe flicks

, and she brings Buffalo to palpable life, particularly in how she takes good advantage of Niagara Falls for a sly meeting and a foot chase. But that’s nowhere near enough, not even for fans of genre pulp. The film opens and closes with Paczynski playing a game of pinball, and most of what happens in between feels like little more than him being batted around in much the same way. Even his occasional bounce off a big name — Matthew Broderick, Robert Forster, Janeane Garofalo, Robert Vaughn, and Harris Yulin all make brief appearances — only ever just barely makes a ding.

Darn. I’m a sucker for a good noir, but I probably know too much about Tesla.

I totally agree with this review. I know a lot of reviewers liked American Side, but I found it shallow and boring. 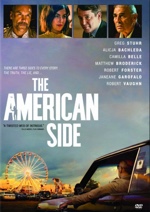 When you purchase or rent almost anything from Amazon US, Amazon Canada, Amazon UK, and Apple TV, Books, and Music (globally), you help support my work at Flick Filosopher. Please use my links when you’re shopping. Thank you!
The American Side (2016)