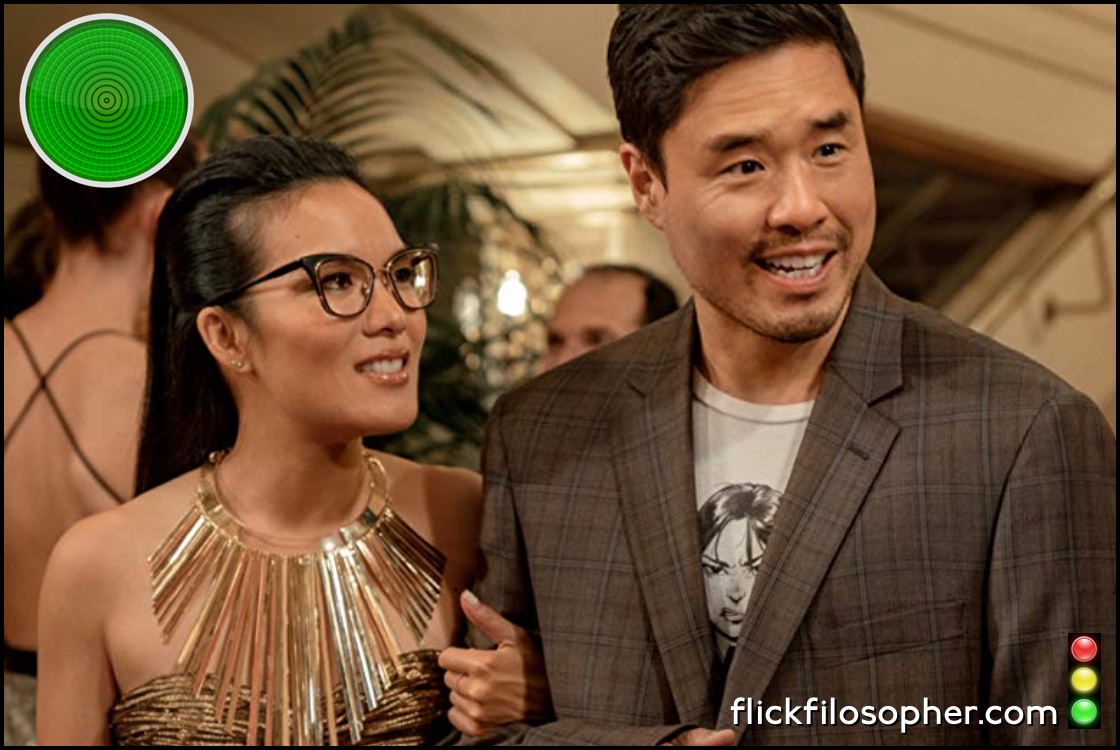 MaryAnn’s quick take: Doesn’t rock the rom-com boat but absolutely delightful anyway. A smart, modern romantic comedy that flips genre scripts and finds a freshness in making room for new voices and new perspectives.
I’m “biast” (pro): desperate for cinematic storytelling that is more diverse
I’m “biast” (con): not much of a rom-com fan
(what is this about? see my critic’s minifesto)

I am generally not a fan of romantic comedies. Most of what we’re offered under this banner is neither romantic nor funny. But much worse than that is what is, for me, the primary problem with rom-coms: They are all about presenting us with a couple that we are intended to see as inevitably meant to be together, and yet they must be kept apart for 90 minutes (in order for there to be a movie at all) while also retaining our sympathy. In too many movies, this narrative dare is met — poorly — by erecting artificial barriers between the couple that are too preposterous to tolerate, and/or by having them behave in such outrageously stupid, cruel, or ridiculous ways that they lose us.

None of this is ever necessary! We are all so neurotic, especially when it comes to love and sex, that even the best of us become our own worst enemies when confronted with someone who 1) makes our bits tingle, 2) challenges us to be vulnerable, and 3) forces us to restrain ourselves from punching them in their goddamn smug fucking gorgeous faces. The mystery and the infuriation and the terror of attraction is more than sufficient to fuel the plot of a movie without having to drag in anything else. Though that does take a bit of self-awareness and a willingness to be self-deprecating on the part of the filmmakers. Which is a lot more than we can usually hope for.

With this all in mind, I approached Netflix’s Always Be My Maybe with great trepidation, because I am absolutely desperate for movies to move away from the dominance of white faces and wanted to be able to get fully behind a rom-com that features Asian-American leads. (The first person who says “But Crazy Rich Asians!” gets a face full of chili oil. This a very different kind of movie: that one was Golden Age Hollywood luxury porn; this is way more down to earth. And way more distinctly American. More on that in a bit. But also because one movie centering Asian and Asian-American people is nowhere near enough.) But I am stubborn enough as a critic — and as a lover of movies — that I cannot give a pass to a film purely because of extrinsic factors such as the diversity of the cast and creators. That’s so important. But the story still has to be damn good.

Joy of joys, Always is a joy. It’s not a box-ticking exercise in diverse filmmaking. I wish I didn’t have to say that. I don’t want to say that and I don’t think that’s even a thing. But some people reading this will think it is. To them I say: Get over your white-ass self. I am allowed to say that because humans don’t come whiter than me, with my Anglo, Celtic, and Scandinavian ethnicity. The world is bigger than us white people. Get used to it, because our blinkeredness is not going to be coddled anymore.

Anyway, Always is an absolutely delightful movie… full stop. This is smart, modern romantic comedy that’s actually both amusing and realistically romantic, because the hangups keeping the central will-they/won’t-they couple apart are anxieties that spring from deep within the characters, so it’s crap we can all identify with and moan about and go, yeah, I’d probably do exactly the same thing and hate myself for it but maybe would end up with a relationship anyway *fingers crossed*?

Sasha Tran (Ali Wong: The Angry Birds Movie) is a hugely successful Los Angeles celebrity chef with a hot — in all senses of the word — fiancé in Brandon Choi (Daniel Dae Kim: Hellboy, Mirai), entrepreneur and investor in her foodie projects, but maybe that relationship isn’t going so well? When she returns to her hometown of San Francisco to open a new restaurant, she reconnects with her childhood next-door-neighbor and best friend, Marcus Kim (Randall Park: Long Shot, Aquaman), who never left home: he’s a partner in his dad’s (James Saito: Big Eyes, While We’re Young) HVAC business and sidelines as a musician in a local band. Sasha and Marcus had a bit of a falling out as teens but now they are finding that maybe the spark of connection is perhaps still there. But there are also matters of money and ambition keeping these two potential lovebirds apart: he is happy to be a struggling musician, she wants to conquer the world with her new-Asian cuisine.

So! Always Be My Maybe is flipping a lot of genre scripts, and I am here for it. The female lead is more financially successful than the guy, and if he is going to be with her, he is going to be the one to sacrifice his life and his preconceptions of where he was going to take himself. (This is rare for men onscreen.) Marcus’s current girlfriend, Jenny (Vivian Bang: Yes Man, Little Black Book), who will obviously need to be gotten out of the way if he is to end up with Sasha, is funny-weird but not anything like the villain or the bitch that another movie might have cast her as. Way more importantly, there is a marked Asian-Americanness to the story and the settings: there are jokes about the cultural differences among the discrete Asian heritages of the characters — Wong is of Chinese and Vietnamese extraction (and we may extend this to Sasha) and Park is the son of Korean immigrants (and we may extend this to Marcus) — but the overriding ethos is that these Asian-Americans are primarily American. Their experiences and their subcultures and their roots are no less legitimately American than, say, an Irish-American one or a German-American one. This has not been something that a silly American movie has said before, as far as I am aware, and I despair that anyone could imagine that this is not an entirely good and awesome thing.

Also notable: Iranian-American director Nahnatchka Khan is, like her characters, the child of immigrants. Stars Ali and Wong wrote the script with an assist from Michael Golamco (Please Stand By), an American of Filipino and Chinese descent. Always is a great example of how making room for new voices and new perspectives onscreen results in stories that feel fresh, even while they are familiar. Always Be My Maybe doesn’t rock the rom-com boat. There’s almost nothing here we haven’t seen before, in the grand genre sense. But it feels new anyway.

Look: I got a thousand words into a review praising this movie without even mentioning the absolute cinematic theft that is Keanu Reeves’s (John Wick: Chapter 3 – Parabellum, Destination Wedding) extended cameo, the nature of which I would not dare spoil in case you haven’t already heard about it. (Reeves: of partial Hawaiian-Chinese heritage. So much Asian-ness happening here.) In a world in which those of us who care about diverse representation didn’t have to be so concerned about that, Reeves’s appearance here would be the headline. That he’s not? Huge progress.

Always Be My Maybe was the Alliance of Women Film Journalists’ Movie of the Week for June 7th. Read the comments from AWFJ members — including me — on why the film deserves this honor.

Always Be My Maybe is streaming globally on Netflix. 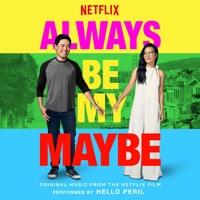 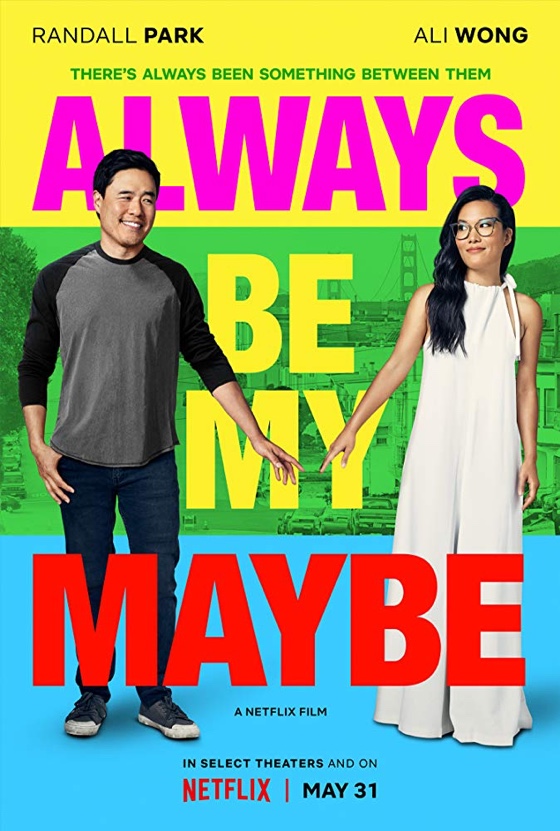 Always Be My Maybe (2019)
directed by Nahnatchka Khan