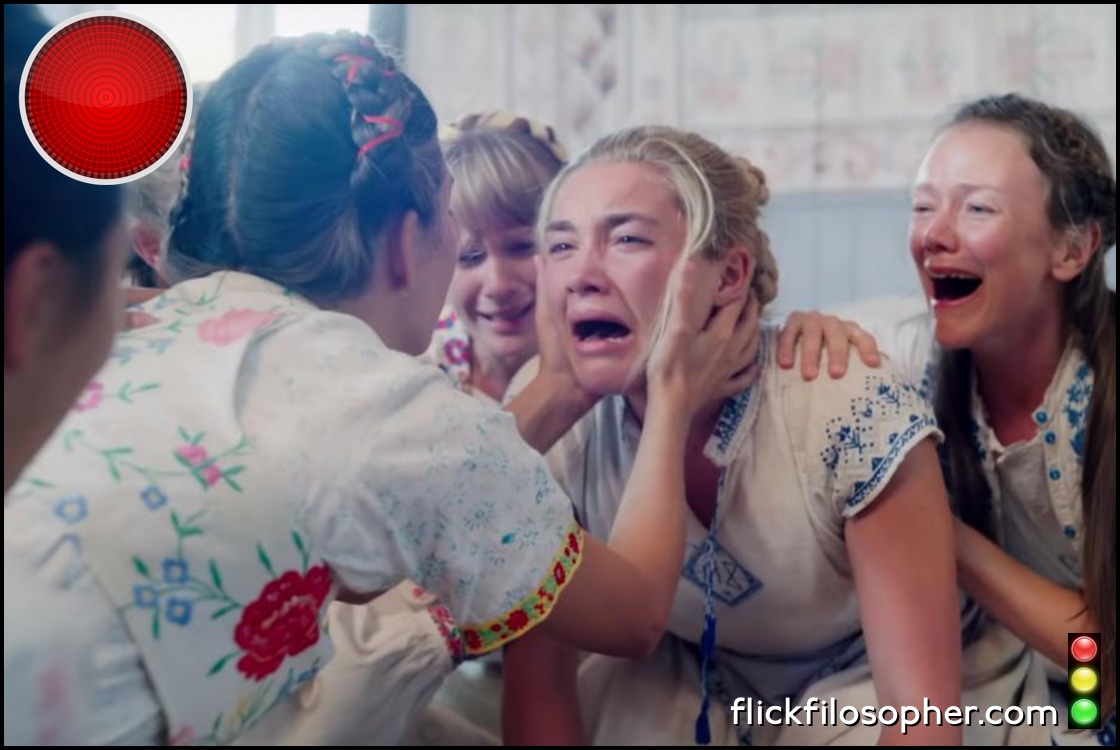 MaryAnn’s quick take…
It’s hard to escape the sense that Ari Aster is getting off on Florence Pugh sobbing and screaming as he fetishizes her terror and torment. And none of it is in the pursuit of any meaning or message.
I’m “biast” (pro): absolutely adore Florence Pugh
I’m “biast” (con): didn’t love Hereditary
(what is this about? see my critic’s minifesto)
women’s participation in this film

I don’t think Ari Aster likes women very much. Oh, I’m sure he’d say he loves them, and that his movies, first Hereditary and now Midsommar, are all about empathizing with women. But what I see in Midsommar — and now, looking back, in retrospect to a certain degree with Hereditary, too — is an absolute reveling in women’s pain and grief. The poster for this film is an accurate representation of its attitude: the closeup on the face of actor Florence Pugh, terrified, grimacing, crying, is unsettling, although not in the way surely intended. (Isn’t that poster edgy? Isn’t it cool and fresh? No, it is none of those things.)

Aster’s movies are allegedly “elevated” horror, supposedly something smarter and classier than the usual shit. But what I see, particularly in Midsommar, is just more of the tedious sexist junk that clutters the genre: women being terrorized and tormented, physically and psychologically, for entertainment purposes, their fear and confusion fantasized and fetishized. I once had a male horror fan explain to me, horrifically, that men enjoy seeing this because it makes them feel protective toward the women onscreen. First, it’s just a tiny step above sociopathy for a man to need to see a woman being tortured in order to feel any sort of human connection to her, so you probably shouldn’t be saying this publicly, dude. Second, all evidence suggests that Aster would agree with this assessment. Bad things do happen to men in Midsommar, but most of it happens entirely offscreen, and when their trials are depicted, Aster does not linger on their pain and terror. He doesn’t get off on that like he does when Pugh’s Dani is sobbing and screaming.

This is all made worse by the fact that Pugh (Fighting with My Family, The Commuter) is one of the very finest young actors working today: she is riveting here, drawing us into Dani’s pain even when what she is being forced to go through is so outrageously preposterous, so calculated by Aster for precisely such a response from the character. In the hands of a lesser performer, this would have been rendered as histrionic. Pugh keeps it real.

But that only makes what Aster is up to infinitely more infuriating. It’s debatable whether Dani is even the protagonist of Midsommar. A case could be made that that role falls to Jack Reynor’s (On the Basis of Sex, Detroit) Christian, Dani’s worse-than-useless boyfriend, who arguably goes on the greatest personal journey here, as he learns (although does this lesson even register with him?) that perhaps being a cold, unsympathetic piece of garbage to his girlfriend is not how a good man behaves. The immense tragedy that Aster concocts for Dani, as the movie opens, seems designed for the reaction it provokes — or, rather, doesn’t — in Christian: he barely seems able to muster any basic human response to her enormous howling anguish, never mind the compassion you would expect from a romantic partner. (If only Christian were a fan of horror movies…)

It’s as a sop to Dani in the face of his inability to offer any meaningful comfort to her in a time of colossal grief that he invites her along on a trip with his friends: Mark (Will Poulter: The Little Stranger, Maze Runner: The Death Cure), Josh (William Jackson Harper: The Good Place, True Story), and Christian are going to Sweden with their pal Pelle (Vilhelm Blomgren), who is taking them to the remote rural commune where he grew up for its rare paganistic summer festival, which they celebrate only once every 90 years. Absolutely nothing that happens once they all arrive is in the least bit surprising, except perhaps how Aster drags out what is, at best, 90 minutes’ worth of story to almost a hour beyond that. Midsommar is an upmarket, artified Hostel in which arrogant Americans — at first Mark, who is (presumably hilariously?) a huge jerk, but not only him — heedlessly blunder around a culture they have no respect for, treating it like a holiday camp instead of the clearly significant spiritual community into which they have been welcomed.

But then Aster himself is doing the same thing, at first inviting us to see that cultural differences, even ones that may shock us, aren’t necessarily bad or immoral or evil, just different… but then he gives in to the self-centeredness, and Midsommar goes all “Nah, weird crazy freaky foreigners, amirite, OMG LOL *gross.*” Aster isn’t even genuinely interested in any even vague authenticity to the pagan rituals that inform his story: May Queens and maypoles, which figure heavily here, are about not summer but the dawning of spring… except those are probably the images that will resonate most with American audiences, whose collective knowledge of Sweden doesn’t extend much past Ikea. So, hey. Or, in the diminished, sadly demented spirit of Midsommar, hej.

It should be thrilling that Midsommar takes place entirely in sunlight, in the impossibly long June days northern Sweden, unlike the horror cliché of everything happening in the dark. But there’s nothing scary about what goes on here. Anything accidentally creepy is purely the result of a mindset that looks upon the exotic as odd and the foreign as unpleasantly tribalistic. Aster loiters in the gruesomeness of his story, as if perhaps he realizes that he needs to make up for the lack of anything genuinely unnerving anywhere else, but even that is only familiar, insipid gore. His treatment of nonwhite characters — a couple of British visitors played by Ellora Torchia and Archie Madekwe — is appallingly trite, and how he treats a disabled person, who doesn’t even rise to a level that can be deemed a “character” in the narrative, is worse still. There’s nothing “elevated” here.

Perhaps most atrocious of all is that none of this is in the pursuit of any meaning or message. Midsommar is all surface and no subtext. There’s literally nothing going on except what you are looking at, and enduring: a way-too-long exercise in minimalistic Scandi style over any semblance of substance. A trip to Ikea is more satisfying than this. 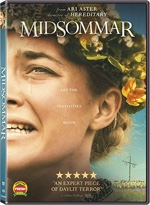 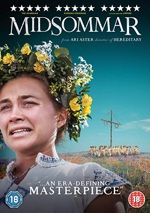 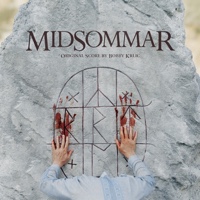 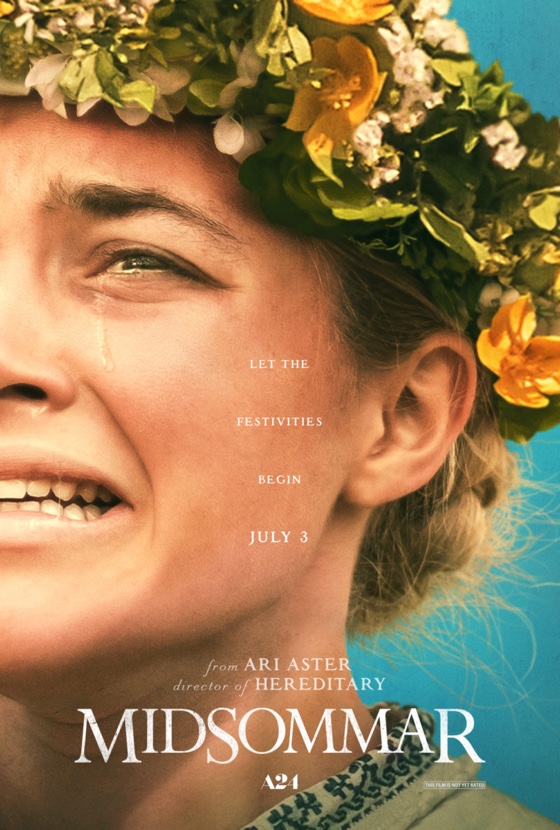