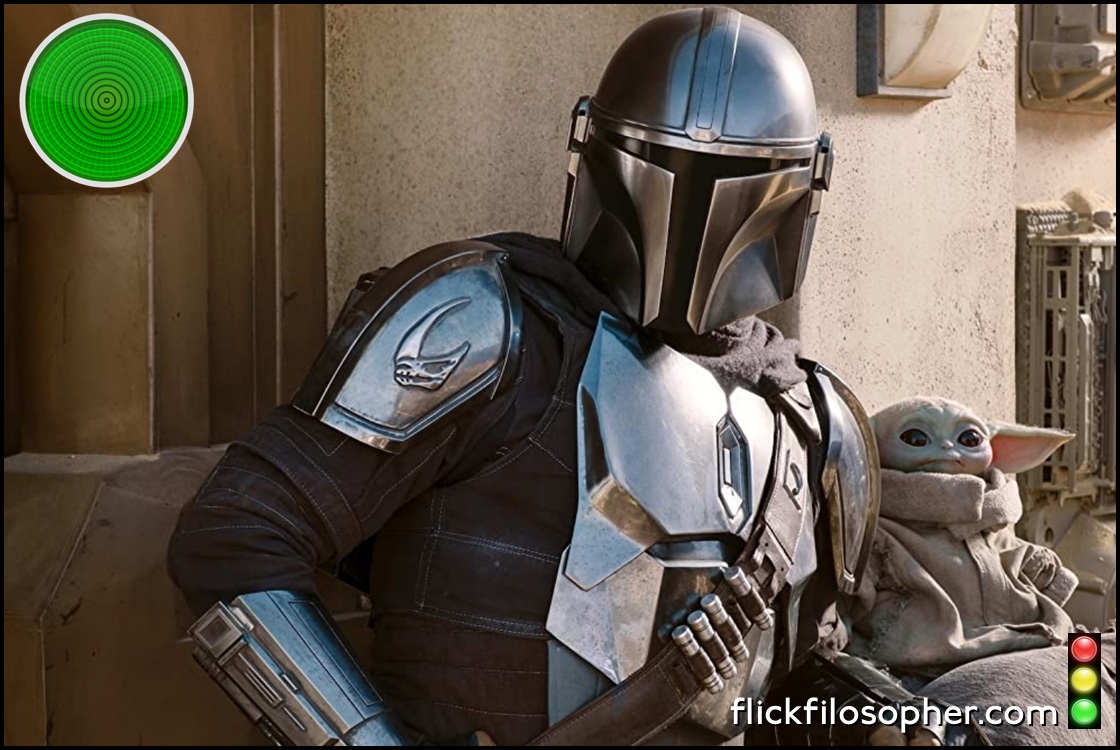 MaryAnn’s quick take: Here is the future of Star Wars, one not mired in the narrow threads of the movies’ mythology, but a story that acknowledges that there is a whole big complicated wonderful galaxy to explore.
I’m “biast” (pro): big, lifelong Star Wars fan...
I’m “biast” (con): ...but often disappointed by it of late
(what is this about? see my critic’s minifesto)

I put off watching The Mandalorian for a while for many reasons. There’s too much good TV and I have too little time is one. (Even given Sturgeon’s Law, that 90 percent of everything is crap, there’s still so much good TV that even that last 10 percent represents an overwhelming amount of stuff. This also applies to movies, and has been a defining factor of my pop-culture-filosophizing life.) Disney+ held off launching in the UK for like five months after it launched in the US — that’s another reason. (I could have used a VPN to access the American stream, but I never got around to it.)

Mostly, I was afraid.

Look: I am a lifelong Star Wars dork. The original 1977 film debuted the summer I turned eight years old, and I first saw it, and was overwhelmed by it, that summer, when I was already well on my way to cultivating an uber-nerd-ness about all things sci-fi and fantasy and weird and alt (which was a lot less stuff, and a lot less mainstream, than today!), before we even used alt as a word, before I even understood what it meant to mark yourself as a geek. For real, as a gradeschooler and first-gen Star Wars fan, I kinda sorta thought if I just concentrated hard enough, I could use the Force to move things with my mind. I mean, not really — I was already stolidly rational and scientific even as a little kid, a scourge of the nuns in my Catholic indoctrination classes, which did not take — but it was a nice bit of pretend to get me through a day in which my prodigious imagination and clearly unappreciated brilliance was not recognized amidst all the mundane boredom I was forced to endure.

I was afraid because the recent SW trilogy has been … not great — only The Last Jedi is truly terrific — and even Solo struck out on the softball pitch of a heist movie starring our favorite pirate-scoundrel. (Rogue One was great, though.) I think I can be forgiven for thinking that anything Star Wars these days has a long way to go to prove itself.

On the other hand, I figured that if there was any time to finally jump in, it was with The Mandolorian launching its second season. If I were ever going to try to get aboard, it was now. So I did.

And I devoured its eight episodes over only two days. Two days of sheer dork joy. I couldn’t stop because it is brilliant. It is oh-so bingeable, and it gets more so as it goes on. My god, I love it so much.

I prostrate myself before showrunner and writer of most episodes, Jon Favreau (The Jungle Book, Chef), whom I was not expecting. But he’s just a few years older than me and so even more primed to be a Star Wars geek; he would have been almost 11 that fateful summer of 1977, so close to that golden age of science fiction at age 12, so there’s that. What he has given us here is a viable future for Star Wars, one not mired in or overly beholden to the very narrow threads of mythology of the movies, but a story that finally acknowledges that there is a whole big complicated wonderful galaxy to explore. So many creatures and planets and peoples and cultures! So much mess to be wallowed in, as we come to understand here, in the immediate wake of the supposedly glorious victory of the Rebellion over the Empire. That was a good thing, right? Or was it?

Cuz what we see here is the truth of many a revolution: nothing looks very different, never mind better, to the marginalized, to those who have never held any sort of power. The New Republic is “a joke,” we discover, here in the Outer Rim of the galaxy. Lawlessness reigns, and it’s difficult tell if it’s any better — or any worse — than life under the despotic Empire, which, we may imagine, mostly left the distant fringes of galactic civilization alone. (Alas, the Jedi Knights, who were supposed to be the guardians of peace and justice in the Old Republic, are barely more than legend here in the Outer Rim. No one seems to have ever seen the Force in action, or to have even heard of it. Where was peace and justice for these people?) We see veterans of that war — by which I mean even those on the winning side — adrift and lost. Those who were on the losing side are even more at sea, and clinging to whatever cultural flotsam and jetsam they can. The very real joy, for us viewers, of exploring and hanging out in a plausible, lived-in science-fiction universe here is somewhat leavened by the realism of the chaotic aftermath of conflict, however triumphant that conflict may have seemed before now.

But maybe the thing I love the most about The Mandalorian is how parsimonious it is with its characters and its settings and its story. We get all the hints we need to appreciate the narrative and the angst of those living it, and we can infer plenty more, but the show explains nothing until the precise moment when it is needed… and then gives us only the absolute minimum we need.

Sometimes this means we know more than the characters onscreen, as when our nameless protagonist, a bounty hunter known as the Mandalorian (Pedro Pascal: If Beale Street Could Talk, Prospect), is tasked with retrieving for his client (Werner Herzog: Penguins of Madagascar, The Wind Rises) what turns out to be a small, adorable, seemingly vulnerable and harmless creature who baffles the bounty hunter — and almost everyone else who encounters the creature — but whom fans instantly dubbed Baby Yoda for its obvious resemblance to the Jedi Master we know and love. (The fangasm over this apparently preverbal puppet character was impossible to avoid even if you hadn’t seen the show when it debuted last year.) Because of the temporal setting, after Return of the Jedi (and possibly before the events of the most recent trilogy?) we also know that “the child” or “the kid,” as it is variously called, is not a younger version of Yoda himself. But it — she? he? — is patently of Yoda’s species. Could s/he also be strong with the Force? We already know that not all humans are Force sensitive, so that’s not a given. And we wait to find out…

On the other hand, there are many things that we know less about than the characters onscreen, especially the Mandalorian himself. Much about who he is and what it means to be a Mandalorian — he is not the only one — is held in reserve until a moment when revealing a morsel will have the maximum dramatic impact. We learn slowly about the legend that surrounds the Mandalorian sect — for sect they clearly are — some of it via Gina Carano’s (Scorched Earth, Deadpool) Rebellion veteran who teams up with our Mandalorian for a few adventures. She is sort of the Han Solo of this story, a practical woman who doesn’t quite understand the Mandalorian’s dedication to the strict rules of his sect but who comes to respect it, and him, nevertheless.

One of those rules is that a Mandalorian never removes his helmet in the presence of another living being… which means that Pedro Pascal has a helluva acting ask before him: He needs to convey all manner of emotion without the benefit of an actor’s greatest asset, his face. And he is incredibly successful at it. There is a grand, if very small, tradition of such performances — I’m thinking of Hugo Weaving as V of Vendetta fame and, to a lesser degree (he still had his mouth to emote with), Karl Urban’s Judge Dredd — and Pascal manages to evoke such sympathy, such identification in us via a tiny turn of his helmeted head, or a long quiet pause in which he doesn’t bother to respond to a deliberate provocation. Pascal’s Mandalorian — a haunted, wounded soul, a man of unexpected honor among so many double- and triple-crossing scum and villainy — is, between the actor’s underplayed performance and the often darkly funny writing, beautifully and masterfully sketched, revealing just enough about him to engage us, and leaving just enough mystery surrounding him to make us thirsty for more. This is dramatic nuance at its most deliciously entertaining.

Oh! And I love how minimalistic his motivations are, while never failing to be utterly credible. Why does our Mandalorian defy his bounty-hunter’s code to see a job through in order to make The Child’s welfare his priority? This is what the show gives us: Our Mandalorian was an orphan, a foundling, as The Child obviously is, and the Mandalorian code is all about protecting lost, lonely children, as he was rescued and raised by them. We really don’t need to know anything else.

The Mandalorian, too, finds a perfect balance between nodding to everything that has come before in Star Wars while not being self-conscious about it or, more importantly, being slavish to it. A familiar planetary setting becomes a way to acknowledge a touchstone while also showing how the fall of the Empire has changed it… or not. The stirring spaghetti-western-ish theme music, by Ludwig Göransson (Creed II, Venom), is fresh while also somehow feeling perfectly Star Wars–esque. But Favreau knows how to toy with our expectations, sometimes indulging our fannish sentimentality: oh, can droids actually benefit from love and care and patience? Sometimes giving us twists on genre clichés: there’s a heist episode, and a help-the-desperate-locals episode. (I got Firefly vibes more than once.) Sometimes going full meta with the humor: the stormtrooper jokes are *chef’s kiss*. And sometimes completely upending them, as in how he has taken the bad-guy iconography of Boba Fett, who wore armor similar to our Mandalorian’s, and turned it into something both melancholy and heroic, or at least anti-heroic. Was Boba Fett, we may now wonder, not actually an honorable member of the Mandalorian sect at all, but merely aping one? Or, more disconcertingly, was he a true Mandalorian after all, and how does that change how we see him as a character?

It’s all so very deeply satisfying, on every possible level. (And I haven’t even mentioned the wonderful performances by Amy Sedaris [My Life as a Zucchini, Puss in Boots] and Nick Nolte [Angel Has Fallen, Return to Sender]! And Giancarlo Esposito [Maze Runner: The Death Cure, Stuck] and Carl Weathers [Toy Story 4]!) So now I have to worry, slightly, whether Season 2 — which has already begun — can maintain this: the dark humor, the delicate fan service, the expansion in all ways of our appreciation for and understanding of this galaxy far, far away, and the people in it. I’d say that I hope the Force is with it, but I don’t think that would mean much. Hokey religions don’t seem to hold much sway in the Outer Rim.

The Mandalorian is streaming globally on Disney+. 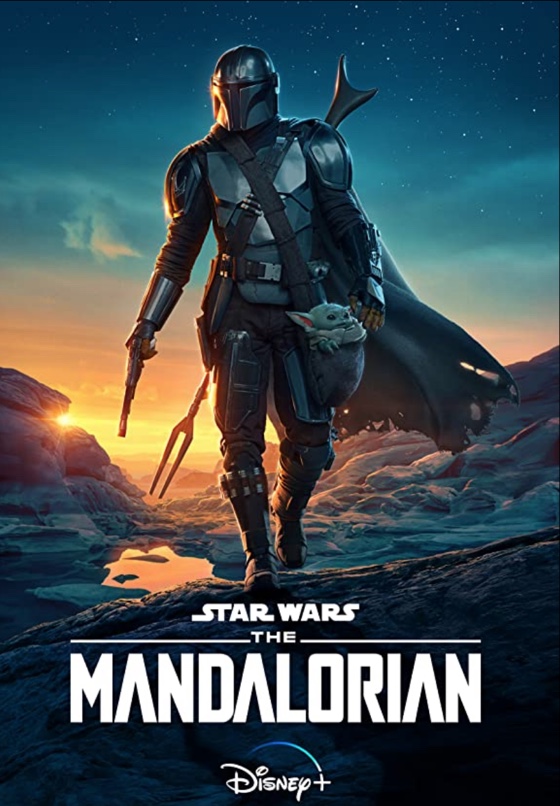