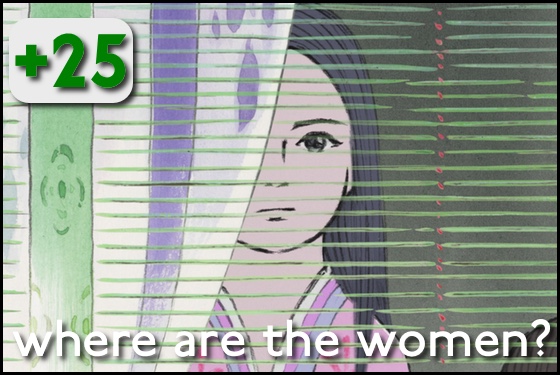 A story about a girl with a playful appreciation of life who resists the constraints her culture places on her, this is a true girl’s own tale.

[no significant representation of women in authority]

Is there anything either positive or negative in the film’s representation of women not already accounted for here? (points will vary)

IS THE FILM’S DIRECTOR FEMALE? No (does not impact scoring)

IS THE FILM’S SCREENWRITER FEMALE? Yes, one of two credited (Riko Sakaguchi) (does not impact scoring)

BOTTOM LINE: A story about a girl with a playful appreciation of life who grows into a young woman who resists the constraints her culture places on her because of her gender and the idealization she is subjected to, this is a true girl’s own tale.

Click here for the ranking of 2014’s Oscar-nominated films for female representation.

See the full rating criteria. (Criteria that do not apply to this film have been deleted in this rating for maximum readability.)

This rating is brought to you without paywall restrictions by my generous Kickstarter supporters. If you missed out on the Kickstarter and would like to support this project, you may:

• become a monthly or yearly subscriber of FlickFilospher.com
• make a pledge at Patreon
• make a donation via Paypal

Thank you for your rating! I really love this film. Maybe the best film about woman for Studio Ghibli. ‘Princess Kaguya’ rescued me as a Studio Ghibli fan because ‘The Wind Rises’ was awfully male-centered and I was really disappointed in it. For me ‘Wind’ is like -50 or so. How do you rate “Where Are the Women” for that film? Thanks.

Why wouldn’t it rate well? The setting of the movie takes place in Feudal Japan; Kaguya is the protagonist of the movie and outside of the nobles and Emperor, those around her still treat her with dignity and respect.

Princess Kaguya got a score of +25, as you can see above. The Wind Rises, on the other hand, is much more male-centered and, apparently, wouldn’t get a very positive score.

I cannot argue with that. Studio Ghibli films in general tend to empower women with strong female protagonists, but The Wind Rises was solely based on Jiro Horikoshi. The women more or less had secondary roles; including his wife and his sister.

*The Wind Rises* is most definitely not set in feudal Japan.

I was referring to Kaguya and it’s setting in feudal Japan, not “Wind Rises”.

Then that was not a response to the comment I posted.

a
reply to  Mariko

Imagine what ‘Nymphomaniac’ or ‘Inherent Vice’ would rate. lol

MaryAnn Johanson
reply to  a

A rating for *Vice* is coming soon. It won’t be positive.