I’m not gonna have time to blog in-depth about the new series of Game of Thrones, but I’m posting a few thoughts after each new episode. Please feel free to talk among yourselves about whatever is happening. (And of course I’ll jump into the comments as much as I’m able.)

Until I say otherwise, take it as a given that I love this show for its complex story and its fascinating characters. That’s the baseline that I’m working from.

Except this week… Umm… 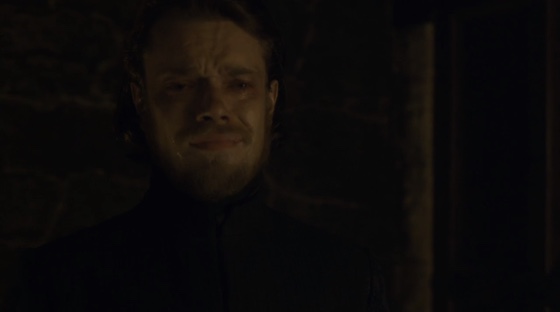 The rape of a woman is horrifying because of how it makes a man looking on feel? *grrrr*

We knew that Sansa marrying Ramsey was going to be bad, but it’s not bad because it make Reek sad. That is not the takeaway from this. Jesus.

I had some stuff to say about Arya and the Faceless and why aren’t the Water Gardens better protected and Cersei being outmanipulated (maybe) by Littlefinger. But fuck it. That last scene left such a sour taste — and not in the way that I’m sure was intended — that I do not want to think about this now.

The end of this episode harkens back to the relationship Dany had with Khal. Khal, introduced as a true Warrior-Savage, was, in the end, trainable. Ramsay, for all his pretensions to nobility, is not. Arya’s section also painted the life-death absolutism so at the core of this series. In GoT, flexibility and halfway measures are the exception and not the, well, Game.

I’m thinking they didn’t want to linger on Sansa too much and potentially build up a redemption angle for Theon. However, in a show that’s already displayed baby-killings (Red Wedding and Joffrey’s purge), Dany being taken from behind by Khal Drogo and other provocative scenes, it’s curious why they chose to flinch there. Frustrating, as Sansa showed a slow drip of courage in her scene with Myranda only to have it snuffed by the end of the episode. It could also be that I find Ramsay’s sadism a bit tired at this point and to add his schtick to the seemingly endless atrocity pile being inflicted on Sansa… I imagine it will pay off in some way, but this is getting to be a reeeeeeeeally long game.

I’m not ready to jump ship yet, but apart from some isolated scenes, this season has easily been the shakiest.

I didn’t say I was jumping ship. But it’s one thing for Ramsey to dehumanize Sansa, and quite another for the show to do that too.

The difference may be the actress’ age — as I recall, she’s barely 18. So they were trying to imply rather than blatantly show. Sansa does stand up to Ramsey a bit by sticking to the truth about Tyrion, where Ramsey wanted to hear something else and thinks she’s lying.
It is a difficult scene. Would it have made a difference if, instead of Theon, it had somehow been Brienne made to watch in horror?

If the writers simply *had* to have Ramsay rape Sansa — this is not in the book and it’s a situation they put her in — then they could have focused on *her* face rather than Theon’s. The way this was shot makes it all about Theon, which is bullshit. Sansa being raped is NOT about him. A woman suffering so that a man can be motivated to do something or change is a horrific trope. It’s overused, and I’m sick of it.

Or, she could have pulled a knife out of her sleeve — as I thought she was going to do when she began to undress — and stabbed him in the heart. Or Ramsay could have held to his promise not to hurt Sansa, setting up some potential conflict later (like if Sansa couldn’t believe that her gentle husband had done all the things other people will later say he’s done). There are so many other directions Sansa’s story could have gone in instead of traumatizing her *again.* Ramsay raping Sansa is literally the least surprising way for this scene to have gone.

I also thought she might stab Ramsay when she was about to undress, anyway, I do believe that the rape is about Sansa and is shown that way, they show her face right before they cut to Theon. By ending on his face you’re not making that scene his, you’re just transmiting the emotions through his face, if someone watching this is just watching at Theon’s face and thinking “poor Theon omg” then that person is pretty stupid. Ending on a graphic rape scene would have been awful iMO, and ending on Sansa’s face would actually remove Theon from the scene, and Theon being there does make things worse for everyone. I think the decision to end with that shot was wise

Why not transmit the emotions through Sansa’s face? You know, the woman actually being raped?

Ending on a graphic rape scene would have been awful

But rape *is* awful. Why pretend otherwise?

They’re not pretending rape isn’t awful, it’s just that some things are better left off camera, I kinda agree that they’ve always chosen the “be graphic” road and this time they chose to “show it off camera”. When I say that ending with the graphic rape scene would have been awful, I mean it in a cinematographic sense. To me the Off camera method was far more effective

If the camera had stayed on Sansa’s face during that scene, with perhaps brief cuts to Theon’s, that would not have been graphic. But it would have been more appropriate to the horror.

If the showrunners lacked the courage to show the rape on screen (and I don’t know why – they’ve not had a issue with depicting violence until now), then they should have just cut away. They’ve done that before, too.

“Sansa’s face would actually remove Theon from the scene, and Theon being there does make things worse for everyone.”

Yes, I fully expect a future epsiode to have Sansa say, in all seriousness, “Well, getting raped wouldn’t have been so bad, but Theon was sitting right there.”

Who’s story is this scene supposed to advance? Sansa is the only one for whom it would make any kind of sense. We have ample evidence that Ramsey is a sadistic, sociopathic bastard. Theon has ample reason to turn against Ramsey. There’s no compelling narrative reason why this would be the final straw, setting aside the problems of using Sansa’s rape to advance Theon’s story.

So you can say that without Theon in the same room the scene would be the same? I know rape is awful but Theon being there makes a huge difference for both of them, I understand what you say, and it seems like it’s already just a bit more of awfulness above all the shit they’ve already been through, but I disagree when you say that “there’s no compelling narrative reason why THIS would be the final straw”, because Sansa being there brings back a part of Theon that had dissappeared when he became Reek.

So you can say that without Theon in the same room the scene would be the same?

No, then it would have been unambiguously about Sansa. If the writers are going to have her raped, the least they could do is make that be about her story.

Sansa being there brings back a part of Theon that had dissappeared when he became Reek.

Which just brings us back to Sansa being made to suffer so that Theon’s story can progress.

Theon could be in the room without the scene being all about him.

Sansa being there brings back a part of Theon that had dissappeared when he became Reek.

See? You understand the problem, you just don’t see it as a problem.

I think you’re right, I just don’t see the problem :/ but well

I would have thought that something as mundane as rape would be beneath Ramsey.