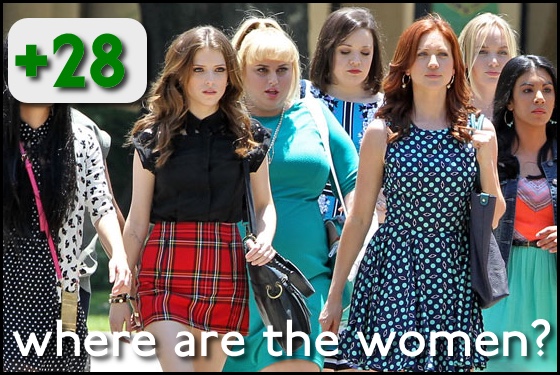 Most of the female ensemble are crude stereotypes, but a few central characters are robust, with complex goals that have nothing to do with romance.

+10
Is there a female character with significant screen time who grows, changes, and/or learns something over the course of the story? (for an ensemble cast, or a film with a male protagonist) [why this matters]

+10
Is there a female villain or antagonist? [why this matters]

Is there anything either positive or negative in the film’s representation of women not already accounted for here? (points will vary)

+5
The character “Fat Amy” has a sex life and a romantic life in spite of the fact that she is fat, which is no impediment to women in the real world but usually is onscreen. (When fat women are onscreen at all, they rarely rate boyfriends or lovers or husbands.) And no one even seems to think it unlikely that she gets her fill of sex and love!
-2
Unfortunately, the movie cannot stop reminding us that Fat Amy is fat; much of the film’s humor attempts to make us laugh at how “disgusting” her body is, even when it does not differ from a slender woman’s (ie, that she has pubic hair, or that she sweats).
+5
The film features a professional mentoring relationship between two young women — a college senior and a freshman — which is not something we typically get to see onscreen. (I can’t think of another example.)

IS THE FILM’S DIRECTOR FEMALE? Yes (Elizabeth Banks) (does not impact scoring)

IS THE FILM’S SCREENWRITER FEMALE? Yes (Kay Cannon) (does not impact scoring)

BOTTOM LINE: Most of the members of the female ensemble are little more than crude stereotypes, though even that counts as an improvement for female representation. Still, a few central characters are robust, with complex goals that have nothing to do with romance. (Some do have male romantic partners who support them emotionally, but their relationships are not what the film is about.) The movie also depicts female networking and support among women as important.

Click here for the ongoing ranking of 2015’s films for female representation.

See the full rating criteria. (Criteria that do not apply to this film have been deleted in this rating for maximum readability.)

This rating is brought to you without paywall restrictions by my generous Kickstarter supporters. If you missed out on the Kickstarter and would like to support this project, you may:

• become a monthly or yearly subscriber of FlickFilospher.com
• make a pledge at Patreon
• make a donation via Paypal