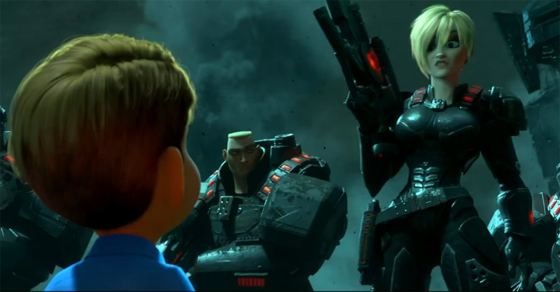 The Los Angeles Times blog The Envelope held a roundtable recently with animation directors, and among the topics was the following exchange. (The participants here are ParaNorman codirector Chris Butler, Brave codirector Mark Andrews, Hotel Transylvania director Genndy Tartakovsky, and Wreck-It Ralph director Rich Moore. Also at the roundtable but not responding here is Rise of the Guardians director Peter Ramsey.)

If you’re making an animated movie in the U.S. marketplace, almost by definition it has to be a family movie. Did that ever create dilemmas for you?

Chris Butler: Every day we talked about it. Where’s the line? Are we crossing it? How far can we go? The interesting thing for me was that quite often when we would screen to kids, the kids are fine. It’s their parents that were like, “They’re scared.”

Andrews: I want to give my children, as a parent — I want to give them the tools to say, look, it is scary and you’re going to survive. Trust the storyteller. We’re not going to steer you wrong. I reference “Bambi.” I reference “Dumbo.” There are scary Disney movies that people have grown up with.

Tartakovsky: I think it’s an issue with the animation industry, where everybody’s trying to make one movie. Rather than, we can have a kids’ scary movie or an action movie and a stupid, silly comedy, everybody’s required to make one type of movie. If somebody could break free and make something different, it could be just as successful but just different.

Rich Moore: I said in the beginning I’m making a movie about video games. They have violence in them. There’s a lot of conflict. There’s a lot of stress and action. So this is going to be a PG film. We’re not going to be able to make a movie about video games and rate it G. And then it was just a balancing act of, OK, there can be gunplay. But it’s all science fiction, and there’s a certain amount of levity to it.

This is something that bugs me deeply. Even a PG-rated animated film that features dark themes and sometimes disturbing imagery — which could certainly be said about Rise of the Guardians and ParaNorman — still get slapped with the “kiddie” label. Not that it’s wrong for a kids’ movie to be a little dark or disturbing, but then some parents freak out when a cartoon flick isn’t pure sweetness and light.

Why do we consider animated movies to be kiddie flicks or “for families”? What will it take for the assumption to stop being automatic? An R-/15-rated animated film? Is such a thing even possible in the existing business environment for films?

(If you have a suggestion for a QOTD, feel free to email me. Responses to this QOTD sent by email will be ignored; please post your responses here.)

available from all fine ebook sellers