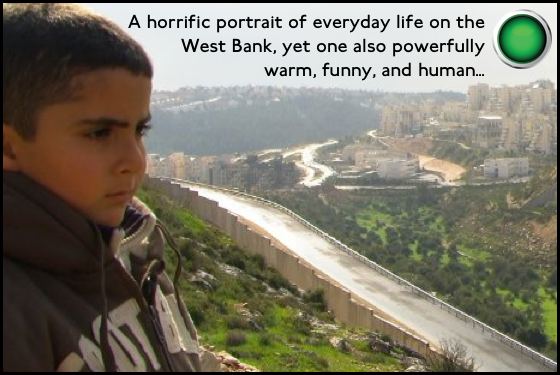 Sometimes the simplest ideas result in something touchingly profound. Sometimes the simplest films are the ones with the most complex impact. Here we have Emad Burnat, a Palestinian villager who bought a videocamera a few years ago to record the life of his newborn son, Gibreel, and found himself also drawn into documenting the subsequent years of protest by his village against the illegal encroachment of Israeli settlements in his West Bank district. With the help of (ahem, Israeli) filmmaker Guy Davidi, Burnat’s footage has become a film — an Oscar-nominated one, for Best Documentary, at that — that is a distressing portrait of everyday life in the West Bank, where kids’ birthday parties and street entertainers making villagers laugh and jovial workmen repaving the road are the same sort of ordinary events as Israeli soldiers arresting children, shooting apparently indiscriminately into peaceful demonstrations, and throwing tear-gas grenades like they’re confetti. These home movies are not like yours… and yet there’s no question that these are home movies, the sort of casual photographic gathering of daily life that we all engage in. It’s both horrific — Gibreel’s first words are the likes of cartridge (of a bullet, that is) and army — and powerfully warm, funny, and human: the bewildered look on an Israeli soldier’s face when Gibreel hands him a bouquet of weedy flowers is extraordinary. The film’s title reflects the regularity with which Burnat’s equipment is smashed and shot, but he never seems to lose hope, perhaps buoyed by the spirit of his friends — there’s an exasperated love for one pal who enjoys making a scene by hugging a tree or yelling histrionically at soldiers — and the wit and creativity of the village’s entirely nonviolent protests. This isn’t the West Bank we see on the news, a distant, troubled place. It’s real, and it’s full of people just like us. 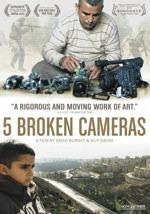 When you purchase or rent almost anything from Amazon US, Amazon Canada, Amazon UK, and Apple TV, Books, and Music (globally), you help support my work at Flick Filosopher. Please use my links when you’re shopping. Thank you!
5 Broken Cameras (2012)