MaryAnn’s quick take…
It’s easy to see an anti-feminist “Just look what happens to women who break the rules” underneath what is most obviously simply straight-up salaciousness.

Baby Face is a 1933 Hollywood film from the moment just before the so-called Hays Code, which had been created in 1929 but hadn’t had much in the way of teeth, began to be seriously enforced… and it’s pretty clear that outrage over this movie helped contribute to the push for the Code to claim its power to censor. This movie may represent the pinnacle of cinematic “offenses” that pre-Code films committed that had conservatives and self-appointed morality police up in arms: Baby Face is blatantly, openly about sex in a way that few movies ever are, even today. Even “worse,” it’s about a woman using the power of sex to get ahead in the world.

Whether or not Baby Face was seen in 1933 as a progressive portrait of the challenges women faced in a world run by men is difficult to gauge. I would guess not. The New York Times review of Baby Face from June 1933 is pretty sneering, and the trailer from the time seems to set up its female protagonist as a sort of alluring villain, and her story as perhaps a cautionary tale for men who might be drawn to her.

It’s hard to imagine the mindset of an era from long before you were even born, but when this movie was made, it seems as if many people believed that women had achieved political equality with passage of the Constitutional amendment granting women the right to vote in 1919, 14 years earlier. But the daring flappers of the 1920s had pushed social boundaries of all kinds: in dress, in attitude, in behavior. Women stopped wearing corsets and starting wearing makeup; they drank alcohol (which was illegal, of course, during Prohibition) and smoked; they dared to express an interest in sex. All very unladylike.

So it’s easy to suspect that there is a sense of “This has all gone far enough” and “Just look what happens to women who break the rules” intended to be taken from Baby Face, underneath what is most obviously just straight-up salaciousness. It starts out with a depiction of Lily (Barbara Stanwyck) that probably audiences of the time would have found sympathetic: she works at her father’s speakeasy in some awful small industrial town, where she takes a lot of crap from the male customers. Eventually it becomes clear that her father (Robert Barrat) has been pimping her out to the customers. Director Alfred E. Green makes absolutely no bones about the way one “client” sees her with a pan up her body meant to show how disgustingly predatory he is. (When you see shots like this in movies today, showing off a woman’s body like she’s a piece of meat, they’re meant to be sexy and enticing; they lack all of the awareness of just how icky they are that this one deliberately embodies.) A moment later, when Lily, thoroughly repulsed by him, pours a cup of hot coffee over his hand on her knee, it’s clear we’re meant to be on her side, no question about it. She rages at her father for how he has treated her, so while ideas about consent and sexual appropriateness have changed between now and then, it’s plain that even the standards of that day would not have condoned the abuse Lily has endured.

After that, though, the film seems increasingly less sympathetic to Lily’s predicament. And it is a predicament: she is forced to leave home, forced to make her own way in a world that is not friendly to women. The only man who had treated her with any basic decency at all is a kindly local cobbler (Alphonse Ethier) who encourages her to embrace the selfish philosophies of Nietzsche, to “exploit yourself… use men to get the things you want.” To “crush out all sentiment” and exploit men the way they had exploited her.

And she does. There is absolutely nothing explicit depicted onscreen — the most we see is a bit of fully dressed canoodling — but the movie makes it perfectly plain that Lily will and does have sex with any man from whom she can benefit, even if she’s only just met him, from the railroad worker who is going to boot her out of the freight car in which she hitches an illegal lift into the big city to the workers at the corporate bank where she lands a lowly job from which she slowly advances to more lucrative ones. (I don’t know if director Green intended for the viewer to take a phallic inference from his pans up the tall skyscraper that houses the bank, the camera inching further up the facade as Lily trades in one man for the next more powerful one. Maybe that was a way of being subversively naughty.) The dialogue is full of snappy double entendres: When someone in a position to hire asks, “Have you had any experience?” she replies “Plenty!” When someone else asks, “Were you working hard?” she replies, “Yeah, but not at the bank.”

The men don’t come off well, at least to modern eyes: they are total pushovers who seem incapable of not having sex with her. She’d have gotten nowhere if they weren’t slaves to their most base desires, even the supposedly sophisticated ones. And other women at the bank are clearly resentful of her manipulative methods. It’s a dismal view of humanity all around. But it’s tough to see that the movie was intended to be feminist as we would think of it today. It may be decidedly antifeminist: as a portrait of a woman of the time, it seems less inclined to see Lily as someone forced to play a game she did not invent — she may be bad, but men are worse — and more as a woman who should have known better, perhaps taken the higher ground even if her “adversaries” (men) refuse to do so. As the story progresses, it becomes more about a woman who is unable to recognize love when it is finally standing right in front of her, and the ending is all about her rejecting her own ways and going “straight.” That ending, with a “reformed” Lily, was apparently demanded by the Hays Code censors, who did have some influence. The original ending was more brutal, and more in keeping with Lily’s story. But it wouldn’t have been any more feminist, except through a 21st-century lens, which might have seen it as a tragic example of what happens when women are given few options for getting ahead in the world, and even perhaps, as a metaphor for “traditional” male-female relationships as the only acceptable way for women to better their positions in society.

Postscript: One aspect of the film that could be considered somewhat feminist even today: how Lily sticks by Chico (Theresa Harris), who had also been employed by — and abused by — her father (though not, it would seem, as a prostitute), and vice versa. Chico runs away with Lily to the big city and remains by her side throughout, and is the only consistent positive presence in her life: women sticking together when men fail them. Chico is black, which surely made her friendship with Lily problematic at the time — it wasn’t quite miscegenation, which was forbidden by the Code, but it was still warm and affectionate, almost sisterly — and may only have been considered acceptable because Chico is, ostensibly, employed as Lily’s maid.

My review of this film was requested and sponsored by reader Nicolas Akmakjian, as a reward for a pledge to my Kickstarter-supported Where Are the Women? project. 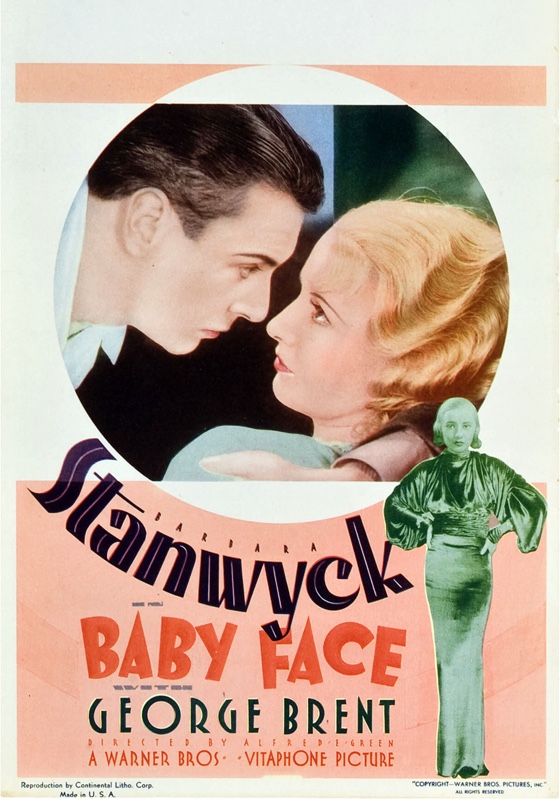 MPAA: not rated
BBFC: rated A (equivalent to PG today)