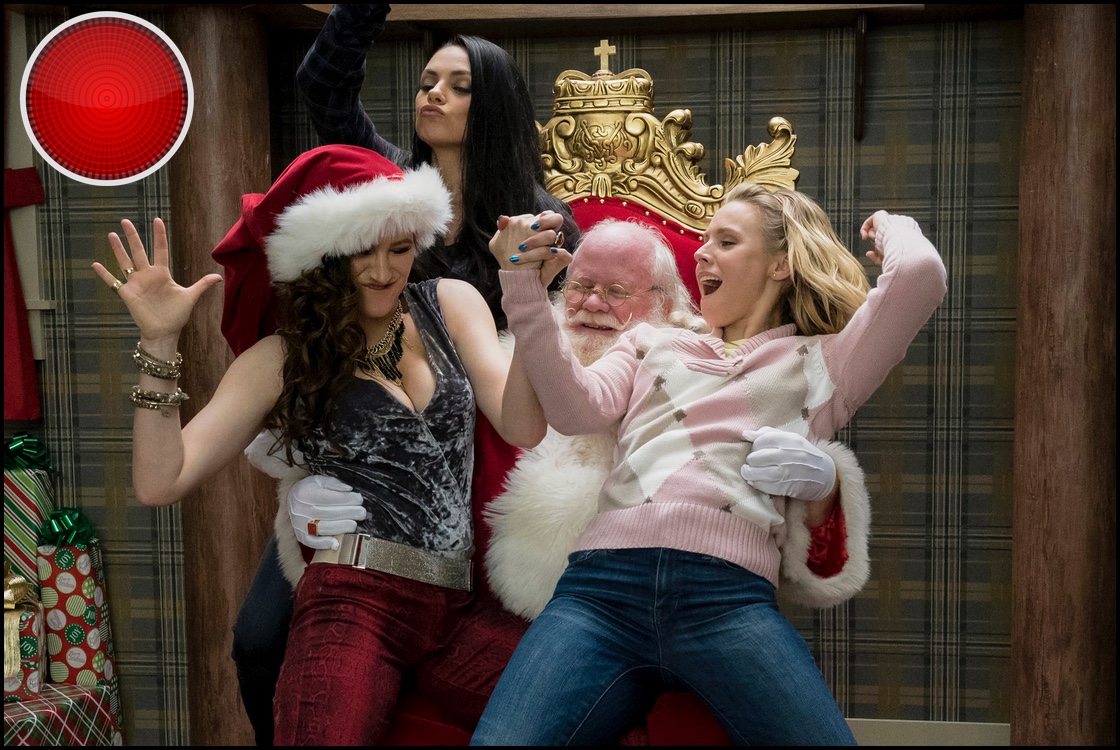 MaryAnn’s quick take…
This rushed sequel is an insult to its progenitor movie. A cheap knockoff that doesn’t understand what made Bad Moms so smart, funny, and feminist-wise.

I’m “biast” (pro): love the first movie
I’m “biast” (con): the trailer looked awful
(what is this about? see my critic’s minifesto)

I’m not sure I’ve ever seen a sequel throw its progenitor movie under a bus the way that A Bad Moms Christmas does. If I hadn’t just rewatched Bad Moms, I would have been doubting what I remembered as a very positive reaction to it last year as I sat through this barrage of nasty, cruel, antiwoman, even antimom garbage.

But no: as I had just reminded myself, Bad Moms truly is a terrifically smart and wise movie — and also a very funny one — about the impossible job that modern motherhood is and the impossible demands placed on girls and women in general. It’s a feminist howl that balances the sentimental and the silly, and the crafty and the crude, really well, which is a rarity for Hollywood films. And this rushed sequel, landing in cinemas barely 15 months after the first movie was an unexpected hit? It’s an insult to Bad Moms. It bears little resemblance to the movie that spawned it,

beyond returning cast members. A Bad Moms Christmas is a cheap knockoff that doesn’t understand what made Bad Moms so great, so actually important for giving voice to the unspoken (at least in mainstream movies) realities of the lives of 21st-century women.

The bizarre thing is that the same creative team — writers and directors Jon Lucas and Scott Moore — have returned. Was Bad Moms a case of even a stopped clock being right twice a day? It seems so: Lucas and Moore have previous scripted some truly heinous movies, such as Ghosts of Girlfriends Past and The Change-Up, and their least terrible movie prior to Bad Moms is The Hangover, which still isn’t very good. Did they even actually write the Bad Moms script? There was previously no indication at all that they understood what it’s like to be a woman alive today, and Christmas suggests (as all their previous work has) that whatever they think they know about women consists entirely of stereotypes.

A Bad Moms Christmas seems to have forgotten that the whole “bad moms” thing was meant to be ironic.

We got genuinely overstressed and frustrated moms with authentic grievances in Bad Moms, and if what happened around them as they finally said “Enough!” and fought back against modern motherhood was a little exaggerated, it was nevertheless still pretty grounded and recognizable. What happens in A Bad Moms Christmas is simply ridiculous, as if the only way Lucas and Moore knew to craft a sequel was MOAR and BIGGER, to blow it all up until it no longer appears even human. All three moms — Amy (Mila Kunis: Jupiter Ascending, Annie), Kiki (Kristen Bell: CHiPs (2017), The Boss), and Carla (Kathryn Hahn: The Family Fang, The Visit) — seem to have regressed back to what they were before their awakening of Bad Moms, as if they’ve forgotten everything that had happened and everything they’d determined to change about their lives. Christmas forces them through the same process all over again — only with added screaming, foulmouthed tykes, crotch-injury humor, and random debauchery that has zero thematic connection to anything else going on — as their own hideously cartoonish bad mothers all simultaneously show up for the holiday and pit themselves against their daughters. Amy’s mom, Ruth (Christine Baranski: Miss Sloane, Trolls), is a sadistic, racist, selfish conspicuous consumer. Kiki’s mom, Sandy (Cheryl Hines: The Ugly Truth, Space Chimps), is a clingy, self-abnegating snoop. Carla’s mom, Isis (Susan Sarandon: Zoolander 2, Tammy) — “like the terrorist organization,” because jokes about radical fundamentalist terrorism is something no Christmas movie should be without — is a lying, thieving, alcoholic gambler. All of them have problems setting boundaries and behaving like reasonable adults.

Probably A Bad Moms Christmas thinks it’s about the complicated relationship between mothers and daughters. But it seems able to approach this only in a phony way that does not earn any of the big emotion it wants to be about.

More importantly is that it seems to have forgotten is that the whole “bad moms” thing is ironic. Or at least it was. It was a way for Amy and Kiki to push back against the impossibility of being the “perfect” moms no one could ever be, and to stop feeling like miserable failures for not reaching an unrealistic ideal. The beauty of the first movie is that Carla, who was a pretty indifferent mom, and Amy and Kiki, who were driving themselves crazy trying to be paragons, ended up meeting somewhere in a compromising, good-enough middle. And everyone, including their kids, were happier for it. But here, their moms really are bad, terrible mothers. Ruth, Sandy, and Isis are so over-the-top that they barely register as real people, which was never a problem with Christina Applegate’s just-a-little-bit-amplified supermom of the first movie. (She makes a pointless cameo in Christmas.) They are examples of the outrageous toxic femininity, times a thousand, that the first movie pushed back against, yet now Amy, Kiki, and Carla are supposed to accommodate it merely because it is their own mothers dishing it out. The little bit of putting-their-feet-down and standing up for themselves that the younger women do in no way balances out the movie’s ultimate resolution, which is that women should try to see it from their mothers’ perspective, how their moms earned the right to be so genuinely terrible because motherhood is such a tough job.

Bullshit. A true sequel to Bad Moms that wanted to deal with this sort of generational crap would be called Bad Daughters, and would have seen Amy, Kiki, and Carla tossing out harmful notions of overly dutiful daughterhood in the same way they tossed out notions of maternal perfection. That would have required the same sort of audacity and courage that the first film had in spades. Where did that disappear to?

It was a way for Amy and Kiki to push back against the impossibility of being the “perfect” moms no one could ever be, and to stop feeling like miserable failures for not reaching an unrealistic ideal. The beauty of the first movie is that Carla, who was a pretty indifferent mom, and Amy and Kiki, who were driving themselves crazy trying to be paragons, ended up meeting somewhere in a compromising, good-enough middle.

Kristen Bell is on a fantastic TV series called The Good Place. It’s not about feminism or motherhood, but it does deal with the idea of what it means to be a “good” person, and whether it’s possible to achieve it when you’re deeply flawed and imperfect. It’s too bad the writers for that show didn’t work on this movie.

I’ve head good things about that show. Adding it to the list…

I did not see Bad Moms, but, the trailer didn’t look at all appealing and, well, you say it was good? Maybe I should give it a go if it traipses across my vision.

But, really? It looked like the typical grown-ppl-acting-out shit that is made and watched by people who actually are nostalgic for high school and the oddly extended high school that is college in the US. 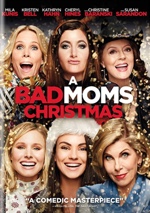 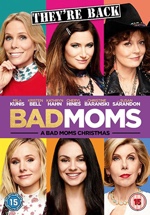 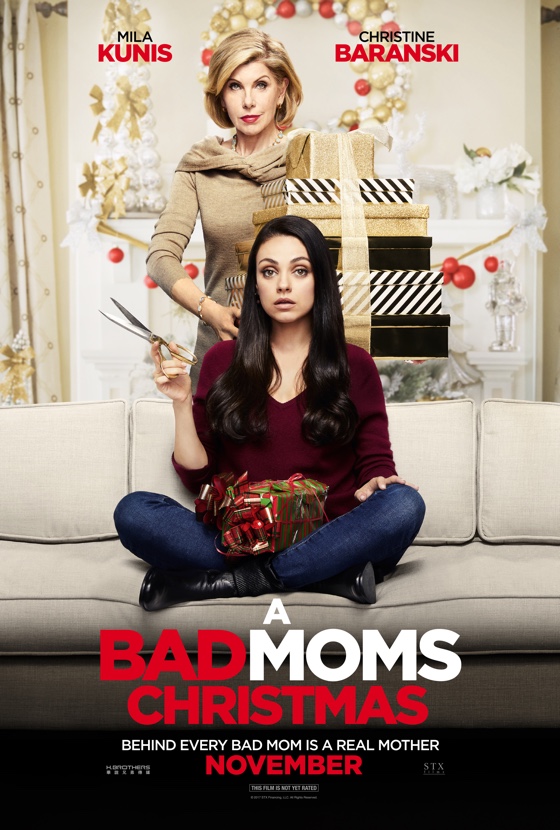 MPAA: rated R for crude sexual content and language throughout, and some drug use
BBFC: rated 15 (strong language, sex references)