Weak in the Breeze

I suspect that many people my age — I’m 37 — are equally fascinated and repelled by modern stories looking back on World War II. Fascinated because, damn, it is an incredibly compelling narrative, of courage and honor and sacrifice and of an entire nation coming together under one shared purpose in a way that my peers and I have never experienced, one that seems impossibly distant in our seemingly hopelessly fractured society today. Repelled because, damn, we’re getting tired of this mythology of the “Greatest Generation” and how they Could Do No Wrong and how nothing anyone could ever do now could ever measure up; hey, way to disparage the children and country they were supposedly sacrificing everything for.

And it turns out that Flags of Our Fathers, Clint Eastwood’s latest directorial effort, manages to push both those buttons for me in a way that I have to respect, in terms of sheer crassness of the audience-targeting variety. This strange Frankensteinian creature seems to be attempting to be all things to all audiences. It indulges the cynicism of us youngsters who are tired of hearing the praises of the Greatest Generation sung to the rafters at the same time it sings the praises of the Greatest Generation to the rafters. Half bitter and harsh, half propagandistic and hagiographic, this is the love child of Saving Private Ryan and Pearl Harbor, too sentimental to be intellectually satisfying but too tart to serve as melodrama. It’s possible to be a movie lover who enjoys and appreciates both uncompromising drama as well as emotional fluff — I’m one of those movie lovers — but all in the same movie? That’s a cinematic roller coaster with way too many drops and curves and loops for me.

There is an undeniable power to the film when it’s depicting, with a clear-eyed, hard-hitting doggedness, the U.S. invasion of Iwo Jima and its aftermath. This is the true story of that famous photo of a group of Marines raising the American flag over the hard-won Japanese island, and how the men and the image were massaged and manipulated later by the U.S. government in order to serve the war effort and rally a discouraged and bankrupt nation. After the photo is recognized back home for its instantly iconic power, three soldiers — Navy medic John Bradley (Ryan Phillippe: Crash, Igby Goes Down) and Marines Rene Gagnon (Jesse Bradford: Happy Endings, Heights) and Ira Hayes (Adam Beach: Mystery, Alaska, Song of Hiawatha) — are shipped Stateside to do a tour to sell war bonds; they become overnight celebrities, much to their horror. Along every step of the way, as the movie stays in those grim days of early 1945, Eastwood (Million Dollar Baby, Mystic River) and his screenwriters, William Broyles Jr. (Jarhead, The Polar Express) and Paul Haggis (Crash, Million Dollar Baby), miss no chance for grim irony or for, it seems, undercutting the mythos that has grown up around the war. I mean, I never realized before what bad financial shape the U.S. was in by the end of the war — were we really about to run out of bullets? One awful scene shreds, in the most terribly frank way, the military dictum about no man getting left behind; his fellows who witness this can only shrug, so inured are they at this point to the horrors around them.

We learn the truth about the circumstances surrounding the taking of that photo, and seeing how that truth was sacrificed in the cause of the war — and how the people surrounding that truth suffered in turn — underscores what Americans as individuals and American society as a whole surrendered without anyone actually having to come out and say that explicitly. We get how the brand-new culture of celebrity instantly invented for itself a machine for chewing people up. We get how those on the home front — like the mothers of the men in the photo who did not survive the campaign — were doubly comforted and doubly aggrieved by the marketing of that photo, of their sons’ deaths. And even those three men themselves, the ones taken away from the battle and returned to the safety of home… we see how they can’t ever really come home again after what they’ve experienced. (Adam Beach in particular is fantastic as an American Indian who seemed perfectly able to deal with blatant racism in the Marines and at home, but can’t cope at all with being considered a hero.)

If only Flags has stuck with that brand of bluntness! Much to my bewilderment, the framing story suddenly, about halfway through the film, feels the need to begin overtly lecturing us on how so many suffered so much for the benefit of others. See, after his father’s death, Bradley’s adult son, James (Tom McCarthy: Syriana, Good Night, and Good Luck.), decides to ferret out the real story of that photo, the one thing his father would never talk about, and the ’45 story unfolds as James’s investigation proceeds and he talks to veterans who served on Iwo Jima. (The film is based on a book by James Bradley and Ron Powers.) All the force and focus that kept me riveted up to that point drained away in my disappointment at being scolded, it seemed, for not understanding what I was, in fact, understanding perfectly well. I may not be a member of the Greatest Generation, but I’m not a member of the Stupidest one, either. I was getting the point just fine. I’m not sure why Eastwood didn’t trust that the inherent power of his story was coming through perfectly well, but his decision to sermonize ensured that he lack of faith in himself as a storyteller was, in this case, well deserved.

Click here for my ranking of this and 2006’s other theatrical releases. 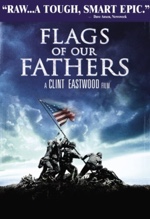 Flags of Our Fathers (2006)
directed by Clint Eastwood