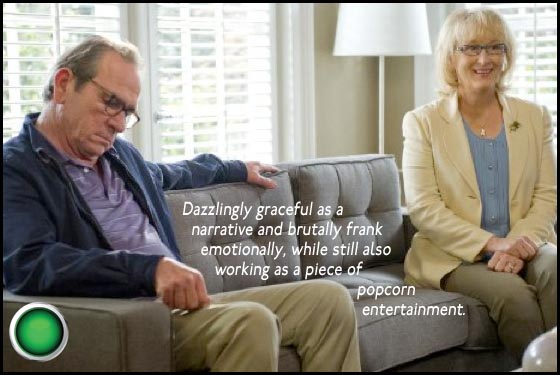 It’s hard to believe this is a Hollywood movie. A man and a woman talking about the sorry state of their marriage with a therapist, and then working on some exercises to patch up their relationship… and that’s it. And it’s mesmerizing, dazzlingly graceful as a narrative and brutally frank emotionally, while still also working as a piece of popcorn entertainment. Hollywood simply doesn’t make movies like this anymore… and maybe it never did. Douglas Sirk might have whipped up a film like this in the 1950s, when he was being dismissed as unserious because he told stories about women’s domestic concerns, but he’d never have gotten away with dialogue about blow jobs or addressing head-on a wife’s sexual dissatisfaction. Feminist-flavored studio films of the 1970s and early 80s, for the most part, took women out of the home and into the workplace, or onto the dating scene. But here — wonder of wonders! — is a story about a 60something woman who is missing the romance and, yes, the sex that has disappeared from her 30-year marriage, and is doing something about getting it back. (For those of you playing along at home, Hope Springs fails, miserably, the Bechdel Test, yet it is still hugely feminist.) Kay (Meryl Streep: It’s Complicated) and Arnold (Tommy Lee Jones: Men in Black III) have drifted into an affectionless household routine that has even come to separate beds in separate rooms; screenwriter Vanessa Taylor (Game of Thrones) and director David Frankel (The Big Year), along with Streep and Jones, craft a portrait of their disconnect that is achingly authentic. But Kay has reached a breaking point, and buys them a week’s worth of intensive couple’s therapy with the renowned Dr. Feld (Steve Carell [Seeking a Friend for the End of the World], who is just lovely in a smallish, functional role), which Arnold only very reluctantly agrees to attend. Her unhappiness is profound; he fears the intimacy of even discussing these things, never mind actually practicing intimacy; it’s going to be a long, tough week for them. Perhaps most gratifying about this captivating and sometimes unnerving film: it doesn’t pretend that there are quick answers for Kay and Arnold. If we don’t often see this sort of story on the big screen, it’s because, in part, it’s not as easy a story to tell, or to resolve. That no one involved tried to shove it into more comfortable boxes is a small miracle.

When you purchase or rent almost anything from Amazon US, Amazon Canada, Amazon UK, and Apple TV, Books, and Music (globally), you help support my work at Flick Filosopher. Please use my links when you’re shopping. Thank you!
Hope Springs (2012)