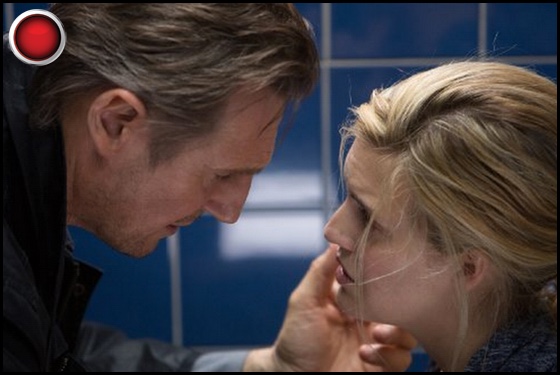 This is a movie as its own death wish. To call it cheap, lazy, and perfunctory grants it a dignity that implies there was another path it could have taken.
I’m “biast” (pro): nothing

I figure French fauxteur Olivier Megaton (Taken 2, Colombiana) jumped his own shark when he chose that nom de cinema, but if not, he’s definitely done it now with Taken 3. It wouldn’t be fair to call this a movie: it’s more a phony, forced assemblage of stilted dialogue, incoherent action sequences, inexplicably sociopathic behavior on the part of its supposedly sympathetic protagonist, and bad self-referential “jokes” about the many idiocies of the franchise it has now, we can hope, killed for good. This is a movie as its own death wish. The only explanation for its existence is so that you can hurl disdain at it. Even to call it cheap, lazy, and perfunctory grants it a sort of dignity: it implies there was another path it could have taken, that if only this here and that there had been better executed, it might have been saved.

This is not the case.

Taken 3 cannot even be bothered to continue the ridiculousness of the very premise the franchise is based on. No one is kidnapped here — or, at least, not as the motivating factor to get Bryan “Looks Like I Picked the Wrong Day to Quit Badassing” Mills (Liam Neeson: A Walk Among the Tombstones, A Million Ways to Die in the West) back into geriaction. Instead, he is framed for the murder of his ex-wife, Lenore (Famke Janssen: X-Men: Days of Future Past, The Wolverine)… which, to be fair to returning writers Luc Besson (Lucy, Brick Mansions) and Robert Mark Kamen (Colombiana, The Karate Kid), does carry on the franchise’s tradition of brutalizing women to get a man angry. Bonus: the victim preblames herself for her upcoming murder when she jokes, “I have the worst taste in men.” Cute.

In the course of exonerating himself, Bryan will assault a slew of LAPD officers simply doing their jobs in a responsible way, ensure the deaths or severe injuries of anonymous innocent civilians during a car chase with those cops, and endanger his daughter, Kim (Maggie Grace: The Twilight Saga: Breaking Dawn Part 2, Knight and Day), in multiple ways, including ramming a small plane with her aboard as it taxis for takeoff. With all the vehicles that explode with minimal provocation in this movie, Bryan should have worried that he’d end up killing Kim. At least his tender “I put something in your drink to make you nauseous” scene with her does not involve the potential for a fiery death.

Speaking of exploding vehicles, Bryan makes not one but two preposterous escapes from them. Later, he taunts a bad guy with an “I supposed you’re wondering how I escaped?” which would normally be a movie’s cue to at least show us how such a feat was accomplished. This is not something the movie feels the need to bother with.

But there’s so much more to hate! There’s the embarrassing theft — in plot, visuals, and dialogue — from The Fugitive, featuring LAPD detective Forest Whitaker (Out of the Furnace, The Butler) as not-Tommy Lee Jones hunting down the man who didn’t kill his wife. There are the odd repetitions of banal exposition; the sequence about the bagels is almost hilarious for how pointlessly its mundanity is dragged out. There’s the waterboarding as PG-13 heroism. There’s the enormous body count accompanied by a virtual absence of any blood whatsoever: people can get their throats cut, their brains blown out, their guts and chests shot up, and incur nary a bloodstain on their clothing.

Then again, cardboard people would likely not have any blood coursing through their veins anyway.

See also my #WhereAreTheWomen rating of Taken 3 for its representation of girls and women. 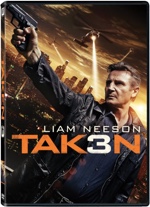 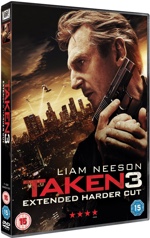 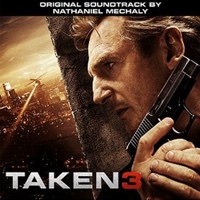 When you purchase or rent almost anything from Amazon US, Amazon Canada, Amazon UK, and Apple TV, Books, and Music (globally), you help support my work at Flick Filosopher. Please use my links when you’re shopping. Thank you!
Taken 3 (2015)