Blue Ruin’s Jeremy Saulnier is back with a smart, savage, dryly funny horror flick that has something to say about all-too-human monsters. No spoilers!
I’m “biast” (pro): love Blue Ruin, love Patrick Stewart and Anton Yelchin

Blue Ruin filmmaker Jeremy Saulnier is back, and if Green Room isn’t quite as astonishing as that genre-busting flick, well… it was a very high bar that he set for himself with his previous film. And yet this one, like Ruin, is still miles apart from the usual gory thriller junk, even the rare junk that’s splattery good fun. The Ain’t Rights are a lo-fi analog punk band — they have “no social media presence” — headed up by Sam (Alia Shawkat: Night Moves) and Pat (Anton Yelchin: The Smurfs 2) who out of desperate financial necessity accept a gig in the middle-of-nowhere Pacific Northwest in a skinhead bar. But the ominous menace of the drippy creepy forest has nothing on the patrons of this establishment, or on its owner, Darcy (Patrick Stewart [Ted 2], chilling in a way we haven’t seen him before), as the band discovers when getting out of the green room after their set turns out to be more difficult than anyone — including Darcy and his manager, Gabe (Ruin’s Macon Blair, damn good again) — could have anticipated. Do the band members, who think they’re badass but are actually rather cuddly and adorable and generally harmless, have what it takes to survive this? Smart and savage and with the genre emphasis placed in some surprising places along the way, this is a movie by turns dryly funny and bitterly cynical and horrifically human: there is nothing supernatural here (again, as in Ruin), only all-too-realistic monsters in the neo-Nazis, who prove to be the sort of people who eat their own in the name of a hateful higher purpose, and so have no compunctions at all about doing to outsiders whatever needs doing in order to protect themselves. If this is horror, it is not as we know it, in the best possible way. It is horror with a newfound purpose and something to say that does not sacrifice shock and dread along the way.

I finally got around to seeing this and it was tense and wonderful. An unique take on the horror genre. My only complaint is I didn’t know anyone’s character’s names except Darcy (Stewart) but that was minor because they were all distinct visually, even the main skinheads. 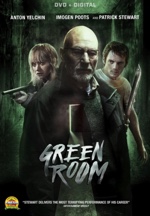 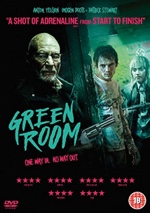 When you purchase or rent almost anything from Amazon US, Amazon Canada, Amazon UK, and Apple TV, Books, and Music (globally), you help support my work at Flick Filosopher. Please use my links when you’re shopping. Thank you!
Green Room (2016)