MaryAnn’s quick take…
A bittersweet, deeply human tale, one with a documentary sense of discovery to its setting: a little seen, highly insular ultraorthodox Jewish community.

There’s a word in Yiddish to describe the sadsack widower at the center of Menashe: schlemiel. A schlemiel isn’t a bad person, but merely one who’s clumsy, inept, a bit of a slob. (No one says the word here, but you can almost see them thinking it in their rolled eyes and their just barely contained polite tolerance for his oafish antics.) It makes the task of winning back custody of his son, nine-year-old Rieven (Ruben Niborsk), much trickier for grocery-store worker Menashe (Menashe Lustig). His ultraorthodox Jewish rabbi (Meyer Schwartz) insists that Menashe remarry before he can claim Rieven back from the child’s uncle, Eizik (Yoel Weisshaus), who makes a comfortable living and — much more importantly — has a nice, proper Hasidic home with a wife and lots kids. Bad enough that Menashe, who was not happily married, is resisting remarriage, but it’s difficult for him to make a case that he could be an unconventional single father when he barely seems able to take care of himself. It is perhaps understandable that he might screw up some domestic chores — like cooking — that in his culture, which is rigidly stratified along gender lines; he will have little experience with. But he screws up at his not-very-difficult job quite a bit, too.

With his first narrative feature, writer (with Alex Lipschultz and Musa Syeed) and director Joshua Z. Weinstein draws on his documentary background to craft a story that is about universal human experience — grief, family, the striving for a better self and a better life — while also having a feel of journalistic discovery to it: the insular ultraorthodox community in Borough Park, Brooklyn, depicted here has not been seen onscreen before with this level of intimacy. (The film is mostly in Yiddish, which is very rare indeed.) Shot on the streets with nonprofessional actors from the community, this was inspired by star Lustig’s own story as a widower and father, and it is gently amusing to see the warmly charismatic actor enacting an own-worst-enemy dramedy of manners: you cringe as you see each new personal disaster heading his way, and tsk as he tries to bumble his way out of them. There is aching poignancy, too, in the disconnect between his religious belief, which is clearly strong and important to him, and his seeming lack of appreciation for how he can’t quite manage to operate within the rules of his community. He’s a nonconformist who doesn’t want to be, but can’t bring himself to conform, either. and he’s pretty miserable with it. We get lots of stories about outsiders who are happy on the outside, but that’s not always how real life goes.

Menashe’s peek into an inscrutable society isn’t all-encompassing: its focus is entirely on men (though one woman, a date the matchmaker sets Menashe up with, gets in a good few, if brief, licks from the female perspective). And it’s yet another tale about a lovable male loser, of which we are already all full up on. But its bittersweetness and humanity won me over nevertheless. 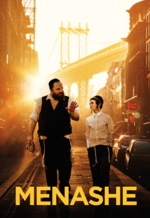