Why We All Can’t Just Get Along

Director Richard Attenborough’s Gandhi is one of the most ambitious biographical films ever made, encompassing not just more than half a century of one man’s life but also one country’s struggle for independence. Ben Kingsley is a marvel as Mohandas K. — later called Mahatma — Gandhi, doing a remarkable job of conveying the soft-spoken determination of a man who would come to inspire a messianic fervor among his people and convincingly aging himself 55 years with little more than alterations in his posture and way of carrying himself.

The film opens with an acknowledgment that it can’t do justice to an entire life but that it will content itself with capturing the spirit of the man. Gandhi does omit some of the more bizarre aspects of the man’s personality, but even semifictionalized and condensed, this is still an inspiring story made all the more powerful by the fact that Gandhi’s methods of civil disobedience and passive resistance did defeat the world power of the era, Great Britain. From the appalling discrimination he faced as a young lawyer in South Africa in the 1890s to his efforts to throw off British rule of his homeland of India in the years after World War I and into World War II, Gandhi preached a doctrine that was neither spiritual nor nationalistic, one that crossed religions difference and national divisions… at least for a while.

When India won home rule after WWII and was divided into Muslim Pakistan and Hindu India, deep religious hatreds that had been somewhat subdued by having a common enemy in the British flared up. Even Gandhi’s message and pleadings for peace were unable to overcome the human compulsion always to find an Other to hate and fight. The British were gone from India, but the stage was set for an animosity between the two new countries that lingers to this day.

And what was the fate of the best-known proponent of “nonviolent noncooperation”? Gunned down by an assassin, of course. That fact doesn’t invalidate his efforts or negate the real progress his methods forced. But it does make one wonder whether what he preached fell upon more deaf ears than hearing ones.

Oscars Best Picture 1982
unforgettable movie moment:
An audience of Indian men rise silently one by one in agreement with Gandhi’s nonviolent stand — Gandhi forces the few Brits present to stand as well by leading a rendition of “God Save the King.” 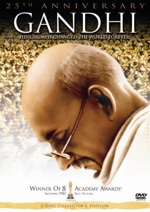 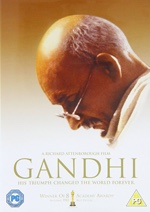