Berlin has been reduced to rubble, the Russians are overrunning the city, 10-year-old kids are fighting alongside soldiers in the streets, and a once-proud citizenry has been completely demoralized. The reaction from the nation’s leadership: “The German people chose their fate,” Joseph Goebbels says with a shrug — after all, they elected the man who is just about finished destroying them. This audacious German film gets much of its power from its daring to speculate that while Adolf Hitler may have been insane, he was hardly a monster — the idea that the man whose name has become synonymous with evil may have been all too normal, in many ways, removes him from a realm of historical rarity and suggests that his like is never too far from appearing again. And indeed, the film’s relevance comes in the reminder of how a once-enlightened country can go crazy, though we see this mostly through the eyes of the little society in Hitler’s underground bunker during the final days of the war, leading to Hitler’s suicide. Amidst the subdued panic and massive denial — Eva Braun (Juliane Köhler) is throwing wild parties while Russian artillery rattles their shelter — Hitler laments that he had “such plans… for the world,” as if it were his to play with, and continues ordering his generals to do completely implausible things with armies that no longer exist… But even when Hitler is screaming and raving, he’s never the cartoonish lunatic we’re familiar with from his public speeches: Swiss actor Bruno Ganz (The Manchurian Candidate) based his performance on a secretly recorded tape of Hitler chatting casually at a private dinner party, and there is a terrifying ordinariness to his depiction of the man. It’s hardly a contrast to the everyday sweetness of his personal secretary, Traudl Junge (Alexandra Maria Lara: Doctor Zhivago) — the film is partly based on her memoirs and interviews; see the doc Blind Spot: Hitler’s Secretary — a nice girl-next-door whose willful ignorance is emblematic of Germany on the whole. Downfall may well become a necessary bookend for any other film about WWII in Europe, if only as a reminder of how common “evil” can be. 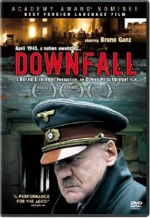 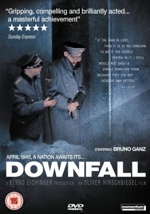 When you purchase or rent almost anything from Amazon US, Amazon Canada, Amazon UK, and Apple TV, Books, and Music (globally), you help support my work at Flick Filosopher. Please use my links when you’re shopping. Thank you!
Downfall (2005)