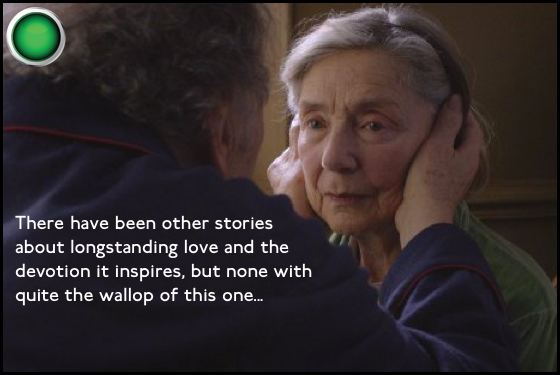 Amour. It means “love.” You knew that. You also know how The Movies usually portray love. As a new bloom, dewy fresh, a delicate thing that might collapse at any moment, and yet also urgent, fueled by lust and astonishment. These are good things. These are powerful things. But they are not the end of the story, even if our stories typically treat them as if they are. This, right here, in Amour, is the end of the story… and it has been a long time coming. Not from The Movies, I mean, though that’s true, too: there have been other stories about longstanding love and the devotion it inspires, but none with quite the wallop of this one. No, it has been a long time coming for Georges (Jean-Louis Trintignant) and Anne (Emmanuelle Riva, now an Oscar nominee for Best Actress for her performance here). Georges and Anne are in their 80s, and the weight of the feeling and the companionship and the commitment and the loyalty of all those years is in the air in every moment of this film, in long uncut naturalistic takes that require no embellishment and no pretense. We are witnessing their reality. It’s in the simple breakfast Georges and Anne are enjoying when she takes a funny turn. It’s in his determination to care for her at home by himself when her funny turn — it seems like it must have been a stroke, though there’s also hints of rapid-onset Alzheimer’s, too — becomes a slow deterioration, mentally and physically, toward the inevitable. We see him manage, just barely, lifting her increasingly useless body out of bed or out of the bath, how he struggles to maintain her dignity in her undignified situation. We learn gradually that she’s a former music teacher for whom music is slipping away. We witness his quiet pain in seeing his wife waste away, and also his refusal to give over this last task of love to anyone else. No nursing homes or hospices, though their daughter (Isabelle Huppert) tries to convince Georges that this would be best. No nurses… not after a demeaning experience with a “carer” for whom Anne is just one more dying old body to push and prod. This is such a deceptively simple film, and quite different from some of the other work of German writer-director Michael Haneke (working here in the French language, and nominated for Oscars for both his direction and his screenplay). He avoids all hints of showy “style,” as if he were indicating that what’s important here is not how he’s telling this story — or even that he’s telling a made-up tale at all. It’s more like we’re witnessing a very real yet very private thing, something that’s usually hidden away because it happens behind closed doors but also because we just don’t want to know what the elderly endure at the lingering end of life, the inexorable slide into a kind of living death. Except for one brief scene at the opening, a glimpse at Anne and Georges’ public life, the entire film takes place within their apartment, and those long still uncut takes challenge us to keep watching, to not look away from Anne’s pain and Georges’s love. Not everyone will meet that challenge. This is beautiful film, and a terrible one: devastating to stick out, and yet one of the most remarkable romances ever made, for it takes The Movies’ pursuit of love straight through to the very end, through its most profound expression of adoration. Amour won the Palme d’Or at Cannes last year, and it’s a rare double nominee at the Oscars for both Best Picture and Best Foreign Language Film, but this isn’t a film that rests easily among other films. It is its own unique, unclassifiable creature: discomfiting and difficult, not least because it depicts a kind of love that may be even more unattainable for most of us than the usual movie kind of love. 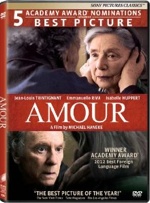 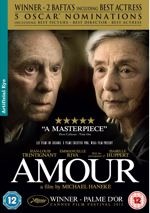 When you purchase or rent almost anything from Amazon US, Amazon Canada, Amazon UK, and Apple TV, Books, and Music (globally), you help support my work at Flick Filosopher. Please use my links when you’re shopping. Thank you!
Amour (2012)

MPAA: rated PG-13 for mature thematic material including a disturbing act, and for brief language
BBFC: rated 12A (contains one use of strong language and distressing scenes)