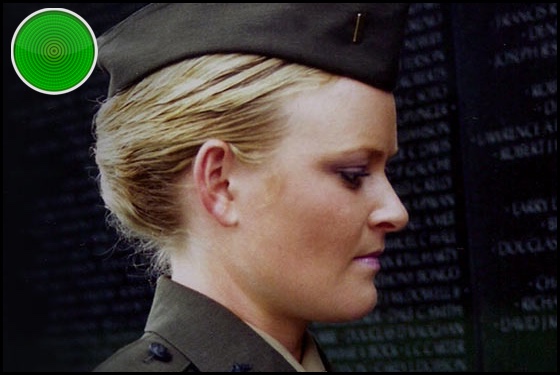 An enraging film, as it is meant to be, and not just because it is a military microcosm of rape culture at large.
I’m “biast” (pro): love Dick’s work; rape culture needs a hearty smack

I’m “biast” (con): nothing
(what is this about? see my critic’s minifesto)

It would be adorable if it weren’t horrific. I’m referring to the rationale that some professional crazy people have put forward why women cannot possibly serve in combat roles in the U.S. military: because men will be so distracted by wanting to protect the delicate creatures that unit cohesion will be impacted. Here’s the reality: 20 percent of active duty military women have been raped. That’s the number offered here, and there’s little reason to doubt it, unless you want to suspect that it’s probably lowballed. (All stats in this film come directly from official U.S. military sources, and it’s hardly in their best interests to be wholly honest. And anyway, we also see that it’s not in military women’s best interests to report their rapes.) These women have not been raped in combat situations by an enemy. They’re been raped by their own soldier brothers. Who, clearly, were suffering from no overprotectiveness toward the fairer sex. These women soldiers have higher PTSD rates than men who’ve been in combat. Because, as documentarian Kirby Dick shows us here, these women have been in combat, too. It’s merely of a sort that no one wants to acknowledge.

The Invisible War, Oscar-nominated for Best Documentary, doesn’t imply that most military men are rapists. Not at all. But it does make it perfectly clear that the vast majority of nonrapist men in positions of power in all the branches of the American military protect and enable the minority of rapists (and obviously are also not moved to come to the aid of abused and injured women). That the military is, in fact, a perfect environment for sexual predators — who target men, too, as is acknowledged here — to thrive in, where women investigators are kept away from rape cases because they are “too sympathetic,” where evidence is disappeared, where women who bring rape accusations are subject to professional retaliation.

Just when you think you cannot possibly be angrier, Dick tosses out another fresh hell, such as this: some women who report being raped by a military comrade are charged with “adultery” even if the women are unmarried, while their married rapists are not. This cannot be dismissed as one of the usual horrors women who report rape, in the military or in the civilian world, face, the suggestion that they weren’t really raped and are merely “misinterpreting” a consensual encounter or are being cattily vindictive after the fact for some bizarre reason that exists only in the minds of people looking to ignore rape. Because if adultery is a crime in a military code, and it’s accepted that a sexual encounter took place, why aren’t those married men being charged with adultery as well? There’s no reasonable explanation except that those in charge know damn well what’s going on but don’t want to deal with it.

This is an enraging film, as it is meant to be, not just because it is a microcosm of rape culture, the collection of pervasive attitudes that rule our society that deny and dismiss men’s violence against women. Not just because it calmly demonstrates that there is no reasonable system of justice in the military, not when it’s all about the chain of command whereby an accusation of any crime must be reported to someone who may well be the accused’s drinking pal. (A slightly hopeful postscript to the film suggests this may be on the way to changing, but only because such ridiculousness has been highlighted here.) War is enraging because the women Dick convinced to speak on camera about their violent — sometimes repeated — rapes and the lack of support they got from the various branches had previously been so enthusiastic about their military service. Maybe they were from generations of Marines, or maybe they were so totally caught up in movies about army life that they couldn’t wait to enlist; one woman here raves about how amazing boot camp was, how she would go through that again and again, it was such an incredible and empowering experience. (It’s heartbreaking, too, to listen to the men who love these women talk about their inability to help them, how their own love of the military has been ruined by watching the injustices perpetrated upon their wives and daughters.)

Dick — who made the similarly muckraking This Film Is Not Yet Rated — zeroes in on something that people who refuse to understand feminism don’t want to hear: that women are people who are driven by the same motives that drive men. The women here are strong and smart, guided by everything from patriotism to a sense of duty to familial tradition to a desire to see the world to just plain gung-ho adventurousness. And more than one of these women say that worse that their actual rapes is the crushing disillusionment that institutions in which they placed so much trust and hope and love treated them like garbage. It’s bad enough to know that these women have been so terribly wounded, physically and psychologically, by their rapes. But it’s infinitely worse to know that what they wanted to contribute to the world was seen as so utterly unimportant that it could be thrown away at no perceived loss. 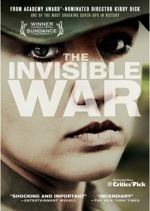 When you purchase or rent almost anything from Amazon US, Amazon Canada, Amazon UK, and Apple TV, Books, and Music (globally), you help support my work at Flick Filosopher. Please use my links when you’re shopping. Thank you!
The Invisible War (2012)