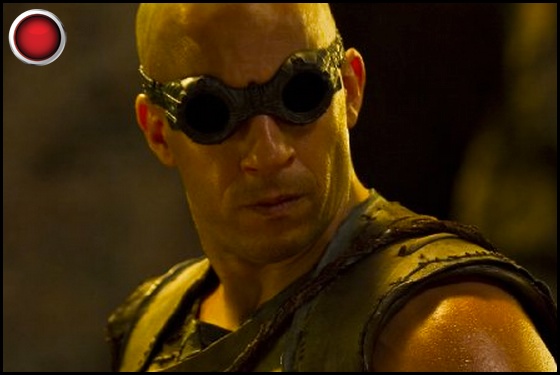 Dispenses with all pretense that the modern action blockbuster is anything other than the confused, terrified power fantasy of a particularly sheltered and emotionally stunted teenaged boy.
I’m “biast” (pro): nothing

Gotta hand it to David Twohy. With this, his third outing with spacefaring sociopath Riddick, Twohy has decided to simply dispense with all pretense that the modern action blockbuster is anything other than the confused, terrified power fantasy of a particularly sheltered and emotionally stunted teenaged boy. I would say this is refreshing, but it’s mostly just sad. I mean, it’s nice to sweep away all the bullshit, but what’s left is just plain risible. Does Twohy understand what he’s done here? Is he consciously pandering to the weak and the powerless who don’t really understand what strength and power are, and consciously reinforcing those wrongheaded notions? Or does Twohy simply unironically believe that this is all so supercool awesome that no one couldn’t not want to be Riddick?

I’m not sure which is worse.

Here Riddick finds himself on a sere planet, kind of like Mars if it had some water and a bit of moldy scrub carpeting. He was on a mission with the Necromongers he ended up with in The Chronicles of Riddick, but now he wants to break free because, he tells us, he “got civilized.” (Twohy skips over this potentially intriguing personal development on Riddick’s part.) They try to kill him, but he runs, and now he’s all alone with no equipment on this dangerous planet. But that’s cool, cuz he’s Riddick: he’s a Real Man. He is a Top Predator, even on this planet of nothing but top predators.

Wait. Back up a bit.

Twohy’s Riddick movies have always had a problem with ecology and animal life, which drove me insane in Pitch Black and threatened to drive me insane here: you simply cannot have an environment with top predators and no other life. There needs to be a food chain. People need stuff to eat when they cannot get Necromongers or hulking badass on the hoof. (Not a spoiler: Riddick does not get eaten.) But I stopped caring — honestly, it was like physical relief — when I suddenly realized, about 20 minutes into Riddick, that this top-predator stuff was all metaphor. Stupid, unpleasant metaphor, but still.

See, cuz there are roving packs of wolf-jackal-hyena things, with tiger stripes and mohawks so you know how vicious they’re meant to be, and after Riddick fights off one of them, he tames another one of them. Raises it from a pup and everything. And there are swarms of a sort of rampaging lizard scorpion things that appear to be the product of a completely different line of evolution from the hyenas [no. stop. you don’t care anymore, remember?], and Riddick fights a big badass one of those and survives, because spoilery thing that I won’t reveal but I promise you, it’s is mega butch.

Vin Diesel (Fast & Furious 6) has been, up to this point, narrating everything in a low rumble that only elephants can hear, but the message, while unenunciated, comes through loud and clear: Riddick is the top predator, the one who kills the other top predators or tames them. This is what a real man is.

How do we know this is all about what a Real Man is? Because Riddick then gets the opportunity to measure himself against two different bands of mercenaries who’ve come to bounty-hunt him to death. Or, that is, we are supposed to measure Riddick against them. There is Santana (Jordi Mollà: Colombiana, Knight and Day), leader of the first group to arrive, clearly a weak, spineless coward: he kills their female prisoner because he’s gotten tired of raping her. Later, he tries to rape Dahl (Katee Sackhoff: Battlestar Galactica), second in command of the other, more professional group (and the only female character after the unnamed raped woman is murdered), but she beats him up because that’s what she does: She’s a gal who doesn’t “fuck men” but she does “fuck them up” sometimes.

We may compare this behavior to Riddick, who doesn’t need to rape. Back with the Necromongers, we cannot miss his mute naked concubines — four of ’em in his bed at a time! And he is so irresistible that even Dahl — who is either actually a lesbian or pretends to be so she’ll be left alone — eventually gives in to Riddick, who needs nothing but crude come-ons and sexualized taunting to make Dahl swoon.

Got all that? Wimpy guys rape women yet can, conversely, get beaten up by women. A real man just tells women, even women who don’t fuck men but do fuck men up, that they’re going to want nasty sex with him, and they do. It’s like magic! (Of course, “Don’t rape” is a message we should be sending to boys and men. But not quite like this. Because even in the Real-Man scenario, women don’t seem to have much volition of their own.)

There’s also some stuff about horse tranquilizers that I won’t spoil, but trust me: it is vital for illustrating what a real man is. As is, it would seem, cultivating a mystique that one may or may not be a sociopath. Twohy seems very intent on ensuring that we never quite know if Riddick is in fact guilty of all the terrible crimes attributed to him — the bounty on him is doubled if he’s brought in dead, we learn — or if that’s just other people badmouthing him for nefarious reasons of their own. Is Riddick a murderous criminal, or just a wrongly accused MacGyver? Only his court-appointed therapist knows for sure.

And one last tip: Don’t build your mercenary station on the dangerous planet to withstand the local elements — like the rampaging lizard scorpion things that come out in the rain — because decent engineering is for pussies. 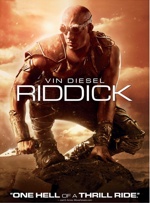 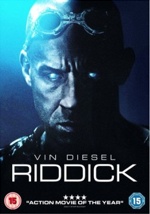 When you purchase or rent almost anything from Amazon US, Amazon Canada, Amazon UK, and Apple TV, Books, and Music (globally), you help support my work at Flick Filosopher. Please use my links when you’re shopping. Thank you!
Riddick (2013)