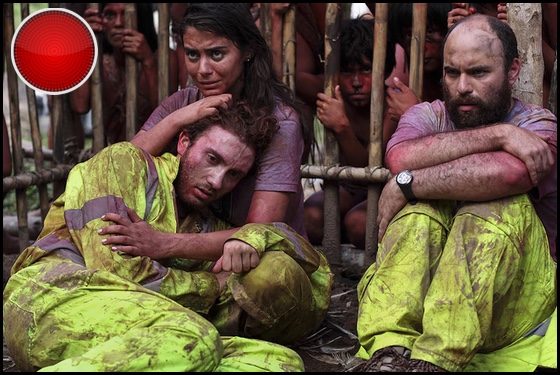 If there is a target for the pitiless cynicism of this brutal exercise in cannibalistic gore, I can’t figure out what it is. Inhumane in multiple directions.
I’m “biast” (pro): nothing

I’m “biast” (con): not generally a fan of the horror genre

If there is a target for the pitiless cynicism of this cruelly brutal exercise in cannibalistic gore, I can’t figure out what it is. Is it Justine (Lorenza Izzo), naive and sanctimonious child of privilege from New York, where she is a student at Columbia University and daddy is a lawyer with the UN, who joins a protest in the remote Amazonian forest and gets much more than she bargained for? Is it uncontacted tribes threatened by bulldozers, deforestation, and capitalistic development, because fuck them anyway for being nasty cannibals who capture and eat the people who are trying to protect their way of life and hence don’t deserve to be saved? (The depiction of the scary foreign brown people here and their exotic savage primitive ways is one of the most offensive things I’ve ever seen onscreen. They are not people. They are boogeymen, zombielike monsters. It’s absolutely appalling. In reality, tribes similar to the one depicted here no danger to anyone else; it’s we who endanger them.) Is it the smug opportunism of professional protesters like Alejandro (Ariel Levy), leading Justine’s group from New York? If writer (with Guillermo Amoedo) and director Eli Roth (Hostel) has a cohesive thought to offer with The Green Inferno — a movie neither environmentally geared, in spite of its setup, nor one that embodies any suggestion of an out-of-control conflagration either literal or metaphoric — he does not share it. (The utterly inexplicable ending suggests that perhaps there was no actual thought process behind this movie at all.) This is supposed to be a horror movie, but there’s nothing scary here, just some carnage and dismemberment and sexualized torture (of women only, of course), and I imagine that even fans of gory schlocky exploitative junk will be frustrated at how long it takes to get to that. This is a movie that is monstrous and inhumane in multiple directions, and thinks this is something to revel in. Shameful.

See also my #WhereAreTheWomen rating of The Green Inferno for its representation of girls and women. 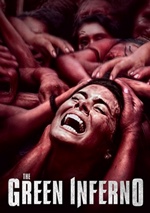 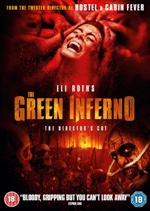 When you purchase or rent almost anything from Amazon US, Amazon Canada, Amazon UK, and Apple TV, Books, and Music (globally), you help support my work at Flick Filosopher. Please use my links when you’re shopping. Thank you!
The Green Inferno (2015)