A gorgeous, cracking adventure with a smart ring of authenticity, full of pulpy twists and perils, and with a sweetly naive but gruffly charming young hero.
I’m “biast” (pro): nothing

In the Arabian desert in 1916, a young Bedouin boy, Theeb (Jacir Eid Al-Hwietat), invites himself along on what, we may imagine, he supposes will be a grand adventure: his elder brother, Hussein (Hussein Salameh Al-Sweilhiyeen) is leading a lost English soldier on a secret mission to a distant railroad line. Theeb, who is perhaps eight or nine years old, and the youngest son of his tribe’s recently deceased sheik, doesn’t know what a railroad is, but he is entranced by the mysterious — and strikingly pale and blond! — stranger, and the enticing wooden box he carries, over which the soldier freaks out if Theeb gets too close. This is one of those enthralling stories about childhood in which we, the viewer, know so much more than its sweetly innocent and naively curious protagonist: we know why there’s a British soldier in Arabia in 1916, we know why he’s so keen to get to that rail line, and we’ve got a pretty good idea what’s in that box. The first feature from British-Jordanian filmmaker Naji Abu Nowar, Theeb is a cracking adventure with a smart ring of authenticity, thanks to its cast of nonprofessional Bedouin performers — Jack Fox (The Messenger) as the soldier is the only experienced actor — and its succinct exploration of the uniquely Arab take on matters of honor, solidarity, brotherhood, and the etiquette of desert survival. This is a gorgeous film, full of pulpy twists and perils, and Al-Hwietat as Theeb is so gruffly charming as its unlikely hero that you will not soon forget him. I find myself captivated by wondering where his life will go after his experiences here.

See also my #WhereAreTheWomen rating of Theeb for its representation of girls and women. 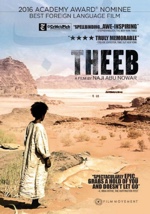 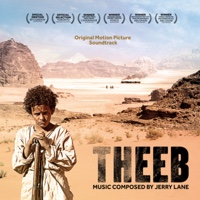 When you purchase or rent almost anything from Amazon US, Amazon Canada, Amazon UK, and Apple TV, Books, and Music (globally), you help support my work at Flick Filosopher. Please use my links when you’re shopping. Thank you!
Theeb (2015)