Sends up one-upwomanship, egotistical self-help, and reflexive hedonism with zing. It is a sheer triumph to see two older women being really funny onscreen.

Did model Kate Moss fall off that balcony at a glitzy London fashion party, into the Thames and presumably drowned, her body lost to the currents of the river? Or was she pushed? Oh, of course she was pushed! But was it an accident, or did legendary PR veteran Edina Monsoon mean to take out the fashion icon?

Sweetie! Darling! Anyone who knows Eddie like we do knows she would never intentionally destroy her goddess, especially not when she was hoping to snag Moss as a new client. And know Eddie well we certainly do, we lovers of the BBC sitcom that crashed our collective party in the early 1990s and again in the early 2000s with the outrageous misadventures of Eddie (Jennifer Saunders [Minions, Coraline], series creator and screenwriter here) and her best friend, Patsy Stone (Joanna Lumley: Me Before You, The Wolf of Wall Street), a fashion editor who never seems to do any actual work. Time has not mellowed the besties, who take their joint rampage of fashion obsession, substance abuse, and general pursuit of an endless champagne-fueled good time to the south of France: what better place to go on the lam when accused of murder? Also unmellowed is Eddie’s long-suffering daughter, unfabulous and sensible plain-jane Saffon (Julia Sawalha: Horatio Hornblower: Duty, Chicken Run), still forced to be the adult in their relationship; Eddie’s assistant Bubble (Jane Horrocks: Arthur Christmas, Garfield: A Tail of Two Kitties) is as giddily brainless as ever.

Some knowledge of the TV show will surely improve one’s appreciation of the silly twists here, but most of the humor continues to be relatively standalone sendups of the emptiness of one-upwomanship, egotistical self-help — “I’m trying to do my mindlessness” — and reflexive hedonism

. One attempt to appropriate the sudden popular interest in transgenderism, with a minor character from the show suddenly announcing a transition, falls flat in a way that’s a bit cringey. But on the whole, the zings are zingy, and the numerous celebrity cameos — Game of Throne’s Gwendoline Christie is my favorite — hit just-right notes of clued-in ridiculousness. Best of all, it is a sheer triumph to see two older women — Saunders is 58, Lumley 70 — being really, really funny onscreen, in all sorts of ways, from sly, often underplayed character satire to to literal falling-down slapstick. Fabulous. 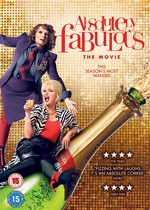 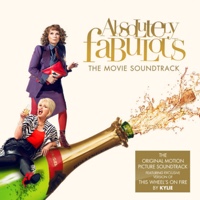 When you purchase or rent almost anything from Amazon US, Amazon Canada, Amazon UK, and Apple TV, Books, and Music (globally), you help support my work at Flick Filosopher. Please use my links when you’re shopping. Thank you!
Absolutely Fabulous: The Movie (2016)