No, sorry, I don’t get it. From Here to Eternity is supposed to be this great, tragic melodrama, but I just don’t see it. As far as I can tell, every dumb guy in this movie has only himself to blame for all the stupid things that happen to him.

It’s prewar 1941 in Hawaii. Robert E. Lee “Prew” Prewitt (Montgomery Clift, kinda the Luke Perry of his time) gets busted from corporal down to private when he shifts from the bugle corps to the infantry. A former boxer, and a good one, Prew now refuses to box for his new company — some boxing tragedy in the past is haunting him — and he gets treated like dirt by the whole company, including its commander, Captain Dana Holmes (Philip Ober), who thinks a boxing win in their division will get him promoted. Boxing is pretty much all Holmes cares about — he leaves the running of his company to Sergeant Milton Warden (Burt Lancaster). The neglectful Holmes also ignores his trampy wife, Karen (Deborah Kerr), and Warden starts taking care of her needs, too. And then there’s Prew’s friend Angelo Maggio (Frank Sinatra), who’s rushing headlong into disaster with his drinking and obnoxious attitude.

From Here to Eternity could be one of the cable network TBS’s “Movies for Guys Who Like Movies.” It’s just chock full of “guy” reasoning. Warden loves Karen simply because she’s gorgeous and slutty (at least, we’re offered no other reason for their affair). But then he gets mad at her for being a tramp — in fact, that supposedly romantic scene of the two of them sucking face as they roll in the surf always gets cut off in the clip we’ve all seen a million times before he starts yelling at her and calling her a whore (he knows how to woo a girl, huh?). If she wasn’t libertine enough to be cheating on her husband, she’d couldn’t be sleeping with him — but this never seems to occur to him. Prew gets into a similar fix with a, er, “hostess” (Donna Reed!) he meets in a gentleman’s club. She basically is a prostitute, but he gets upset and jealous when he can’t have her all to himself. Ah, hello?

Angelo’s chicken comes home to roost one night when he gets drunk on guard duty and goes AWOL. When he’s thrown in the stockade, he’s now at the mercies of head guard Sergeant “Fatso” Judson (Ernest Borgnine), whom he’d antagonized earlier for no particular reason except he didn’t like Judson’s face. Idiot Angelo continues to pester Judson until Judson finally cracks and beats him to death. I ask you, where is the tragedy here? I say it’s a good thing Angelo was removed from the gene pool before he passed on his moron genes.

Oh, there’s so much more, but it’s all rather repetitious. Suffice to say that I felt no sympathy whatsoever for these jerks.

[reader comments on this review] 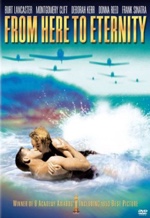 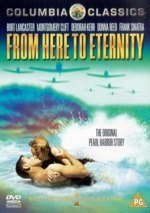 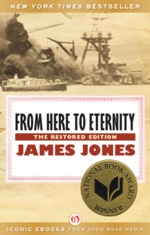 From Here to Eternity (1953)
directed by Fred Zinnemann