I’ve seen Gladiator half a dozen times now — thrice on a big screen and thrice on DVD — and it gets me deeper in the gut every time: By the time Maximus whispers his final words, assuring Lucilla that “Lucius is safe,” I’m starting to sniffle. By the time Juba is reverently burying Maximus’s totems of his wife and son, I’m bawling. I’m not a gal turned off by big, bloody, rousing action flicks — they are, indeed, among my favorite kinds of films — nor am I one to look for the squishy soppy stuff in a manly movie — I mostly can’t stand that girly shit. But every time I watch Gladiator, I’m less taken with the admittedly incredible action sequences and more struck by the quiet, ardent, even reverent heart at its core, one that beats for the love of family.

It’s a heart that beats true that makes Gladiator so rousing — with a lesser actor to lead us through the emotional journey of Maximus Decimus Meridius, Gladiator’s hero, the film would have been little more than a bloody action movie with a mawkish overlay. Russell Crowe well earned his Best Actor Oscar for this performance — it is perhaps the single factor that will earn the film a reputation for greatness, and will perhaps quell the charges by some critics of the film who called it little more than a glorification of revenge. (But probably not.)

Maximus — commander of the Armies of the North, general of the Felix Legions — wants nothing more than to go home to his Spanish farm, to his wife and young son, after too many years away, fighting for the glory of the Roman Empire. But other familial obligations tear at him: the emperor, Marcus Aurelius (Richard Harris: Grizzly Falls), whom Maximus loves like a father, who calls Maximus the son he should have had, begs the general to assume the mantle of power the dying emperor will soon shrug off. The caesar will not allow the empire to pass to his son, Commodus (Joaquin Phoenix: Return to Paradise), who is “not a moral man,” the emperor knows, a deficiency the blame for which he lays at his own feet, for being a poor father.

A sense of honor and duty to family is what drives Gladiator, not a desire for revenge. Yes, Commodus is responsible for the horrendous murders of Maximus’s wife and son, which tears Maximus to his very core — before their deaths, he begs in his prayers to his ancestors to whisper to his wife and son that he lives only to hold them again; after their murders, his recklessness seems less indicative of an all-consuming drive for vengeance than it does a courting of death to speed him to his beloveds in the Elysium Fields, the Roman afterlife. But Commodus also murdered his father the emperor before the emperor’s wishes for the transfer of power could be known — Commodus’s act deprived not only Maximus of his father figure but Rome of its father-protector, one who truly had the best interests of the people of Rome at his heart, unlike Commodus, who craves only power and respect in his falsely inherited emperorship, even if it must be taken by trickery. For Maximus to set this right — by removing Commodus from the throne and handing power back to the Senate, which was Aurelius’s dying wish — is to set the “family” of Rome right.

Powerful and loving family bonds provide the strength Maximus needs to triumph here — bonds between himself and his murdered wife and child, himself and Aurelius, himself and the very concept of Rome — and the perversion of those same bonds are Commodus’s weaknesses: the failed relationship with his father; the twisted relationship with his sister, Lucilla (Connie Nielsen: Mission to Mars), whom he demands give him an heir, his heir; and the threatened relationship with Lucilla’s son, Lucius (Spencer Treat Clark: Arlington Road), the current heir to the throne, of whose life Lucilla lives in fear. Commodus believes he is dedicated to his family, he believes the people of Rome love him because he is “their father,” but he’s loyal only to himself, and his selfishness will be his downfall.

Maximus is, in many ways, a similar man to The Insider’s Jeffrey Wigand, Crowe’s most recent role before Gladiator (and the one for which he deserved an Oscar even more). Both devoted to their families, they are men of conscience initially torn between the people they love and dedication to a larger cause… and the loss of their families only renews that dedication. Maximus, at least, is reunited with his wife and son at the end, in a resolution that is the film’s only possible happy ending.

The really ironic thing, of course, is that it’s me, the atheist, who’s always crying her eyes out over the prospect of Maximus joining his family in a mythical afterlife. But that’s the power of a wonderful film: if it’s true to the big, important ideas, like love and honor, it can cheat on the little ones.

Oscars Best Picture 2000
unforgettable movie moment:
Maximus discovers the crucified bodies of his wife and son at the burning ruins of his home. 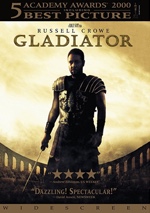 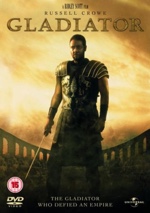 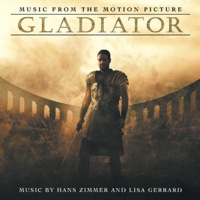 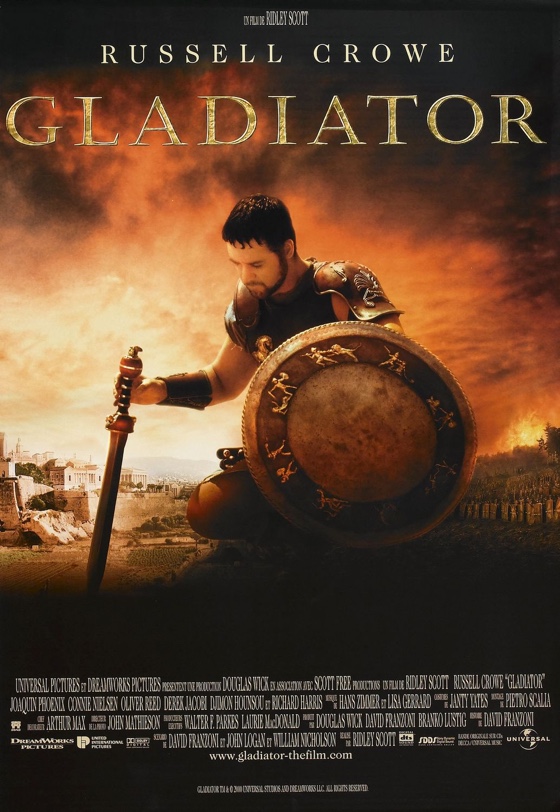