I’m “biast” (pro): I like orgasms; there aren’t anywhere near enough movies about women’s sexuality

The narrative here is fictional-ish, but the setting is real, and it sounds so improbable to us today that Hysteria goes out of its way to make a joke, as it open, about how yes truly this really happened. In the 1880s, London was in the grips of an epidemic that afflicted a quarter of the female population: the dread hysteria. Symptoms included malaise, dissatisfaction, inability to conform, thinking about sex, not thinking about sex, wanting to get the vote, and a general ennui with life. The cure? (Here comes the wacky part.) A physician-administered, ahem, pelvic massage. Oh, it was all quite proper and clinical: legs up in stirrups, velvet modesty curtain, and a detached therapeutic approach as the doctor oiled up his hand, reached between the patient’s legs, and, er, induced a paroxysm of the utereus, known to (temporarily) reduce the symptoms. Finely dressed middle-class and wealthy women lined up at the posh surgeries of these specialists for weekly — or more frequent — treatments, they were that sickly, the poor dears.

Apparently — still in the true bits here — it never crossed the minds of these doctors that there was anything sexual in what was going on. One wonders whether the fact that, it seems, none of these doctors had ever witnessed a woman having an orgasm might have been part of the problem… for their patients were the wives of men just like them: respectable, prudish Victorian gentlemen.

Anyway, in an attempt to lessen his considerable workload and make this tedious professional chore easier on himself, one Dr. Mortimer Granville concocted an electric device to deliver the paroxysms and give his hand a rest.

From the basic facts of hysteria as a (pseudo)medical thing and Granville’s invention, screenwriters Stephen Dyer, Jonah Lisa Dyer, and Howard Gensler, with director Tanya Wexler have spun a rather traditional romantic comedy, though one much sweeter and funnier than I expected. Granville is the charming and slightly befuddled Hugh Dancy (Martha Marcy May Marlene, Adam), who can’t understand why his older colleagues cannot countenance his embracing of germ theory and the radical notion of a doctor washing his hands between patients. Emily Dalrymple (Felicity Jones: Chalet Girl, Like Crazy) and her sister, Charlotte (Maggie Gyllenhaal: Nanny McPhee and the Big Bang, The Dark Knight), are the daughters of Granville’s new boss, Dr. Robert Dalrymple (Jonathan Pryce: G.I. Joe: The Rise of Cobra, Pirates of the Caribbean: At World’s End). Emily is a demure china doll who plays music in the drawing room; Charlotte is a freethinking firebrand who runs a settlement house for poor families in the East End. Guess which one Robert wants his protégé to marry (and which one stodgy Robert holds in disdain)? Guess which one Mortimer will fall for instead?

The thing that’s most wonderful about Hysteria is the tone, which beautifully balances a light absurdity with a refreshing sense of positive change on the horizon. Here comes electricity and social justice! And while we still haven’t today, in the early 21st century, quite comes to terms with the radical notion that women are people, Hysteria treats its prim Victorian ethos with a perspective that seems to come from a future in which it is an absolute no-brainer that women’s sexual pleasure, seperate from a romantic relationship and separate from pleasing a man, is a good and necessary thing in itself. This movie is full of women having orgasms! Young and old, fat and skinny. Okay, they’re all fully dressed and lying on an examination table in a doctor’s office, but still… there are people today who would be shocked by this, that anyone would dare to depict this in a movie. And in such a breezy, witty, and only gently naughty way! There’s a little bit of scientifictional verve to it all, via Granville’s benefactor, the rich, bored Edmund St. John-Smythe (a very funny Rupert Everett: Wild Target, Stardust), whose tinkering with such gadgets as the telephone and an electrical generator inspire Granville. When they perform the first test of Granville’s invention, with the help of Robert’s maid, Molly (a hilarious Sheridan Smith)… hello, steampunk orgasm!

Here’s where Hysteria disappoints (but only a little). It can’t quite be defiant enough to face full on the matter at hand, which is the denial of women’s full humanity. It makes a joke out of the idea that anyone could ignore the reality that women are sexual, but it could have made Granville the butt of the joke instead of its hero. For the real Granville did not actually invent his device to aid in generating “paroxysms” but as a muscle massager, and he was appalled that his invention was being used in this way. Sure, I get that the filmmakers wanted a light comedy, not a dark one… but if they were creating a host of new characters anyway, why not take the extreme step and put one of their amazing female characters at the center? This is a story about women’s sexuality… and it’s still about a man! Hysteria is fictional-Granville’s journey, but it could easily have been Emily’s or Charlotte’s or even Molly’s: she’s a former prostitute, and certainly could have a lot to say about sex and hypocrisy in the Victorian world… including, perhaps, how Granville could both refuse to acknowledge that women’s sexual frustration is at the heart of “hysteria” and also know to recruit a sex worker to test his new toy.

This is a good movie. It’s a fun movie. But it’s also a movie with blinders of its own that it doesn’t seem to realize are in place. It’s an ironic reflection that we haven’t advanced quite as much as we’d like to think we have. 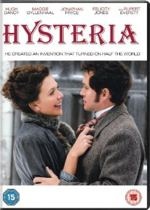 When you purchase or rent almost anything from Amazon US, Amazon Canada, Amazon UK, and Apple TV, Books, and Music (globally), you help support my work at Flick Filosopher. Please use my links when you’re shopping. Thank you!
Hysteria (2012)