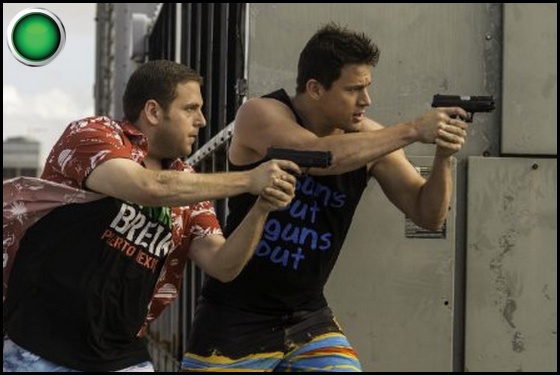 MaryAnn’s quick take…
Funnier, cleverer, wittier, and snarkier than the first film. It is nonstop self-deprecation that doles out well-deserved smacks to about 817 Hollywood things that desperately deserve it.
I’m “biast” (pro): loved the first film…
I’m “biast” (con): …but wasn’t expecting to love the sequel
I have seen the source material (and I love it)
(what is this about? see my critic’s minifesto)

I am like Charlie Brown contemplating before me Lucy with the football, and wondering once again if I will let myself be suckered in… again.

See, I loved the late 80-early 90s TV show 21 Jump Street. And I hate Channing Tatum and Jonah Hill with the power of a thousand dying brown dwarf stars (so, you know, not that much, but still). Also too: Hollywood please stop it with the reboots and the remakes and the updos and whatever and start telling some new stories. So I fully expected that the so-clearly pointless big-screen 2012 do-over of that show would be as stupid as the trailer made it look.

But it wasn’t. It was clever. It was hilarious. Channing Tatum suddenly almost verged on the somewhat potentially attractive thanks to his willingness to make fun of his blockhead self. My mind was blown. My expectations were thwarted. It was a wonderful feeling, to know that I could still be surprised by Teh Movies, jaded critic and too-often-disappointed movie nerd that I am.

Jump Street the movie made a bazillion dollars, and rightfully so cuz see above. So of course now we are confronted with the sequel. And we all know that most sequels are contradictorily bigger and louder and more expensive and also cheaper and smaller and lazier and not as fun. So of course I went into 22 Jump Street all “I loved the first one but sequels, geez, c’mon already Hollywood,” and grumped as the lights went down.

And yet, once again, I am humbled. 22 Jump Street is funnier, cleverer, wittier, snarkier, and all good humorous things morer than the first film. It is nonstop self-deprecation — as if it is embarrassed by its “sequel to a reboot” status — that doles out well-deserved smacks to about 817 Hollywood things that desperately deserve it: TV shows that become movies, sequelitis, dumb cops, dumb action heroes, meet-cutes, obvious red herrings, buddy cops, buddy comedies, bromances, gun fights, fist fights, college comedies, frat comedies (hell yeah: just the small amount of frat stuff here is way better than the entirety of Bad Neighbours), 30-something actors playing teenagers, and other nonsense. Dammit, even the deliberately clichéd soundtrack is deployed to brilliant comedic effect.

I haven’t laughed so hard in ages. The kind of laughter where you didn’t think you were capable of such transport and you’re a little scared by it. By the end credits — which are, dear god, insanely funny in how they knock everything you dread for the future of even a franchise this good — I was on the verge of an actual crackup from cracking up.

Have I mentioned this is a funny funny movie? It’s probably funnier the more you’re steeped in movies, and the more tired you are of how predictable and obvious they’ve become. (Meaning: your mileage may vary if you’re not me.) There’s a sort of genius in how 22 is clearly exhausted by all the movie-movie stuff it’s making fun of, and yet also manages to be all that movie-movie stuff in a fresh new way.

One little moment sorta encapsulates what 22 is doing. Cops Schmidt (Hill: The Lego Movie, The Wolf of Wall Street) and Jenko (Tatum: The Lego Movie, White House Down) have “graduated” to going undercover at “Metro City State College” — they’re investigating a drugs case that is “just like last time” — and Jenko finds himself unexpectedly enthralled by the Human Sexuality class he didn’t even want to take (after he learns that it’s not about having sex in class or watching people have sex in class). As he’s devouring the textbook, he says to Schmidt, with a sort of newly self-aware horror, “Did you know I used gay slurs all through high school?” And he’s sorry about this! It’s like a little metaphor for how Hollywood can be taught, how it can be enlightened. This movie is as big and as loud and as actiony and as goofy as an action comedy sequel can be, and yet it’s (mostly) not stupid, sexist, or homophobic along the way. For good measure there’s a running joke about how Jenko, who is dumber than a bag of Glocks, sometimes realizes this, and laments how it limits him. “Fuck you, brain,” he says, rather sadly, to himself, and it zings by before you even realize how brilliant that is.

Returning directors Phil Lord and Christopher Miller (The Lego Movie, Cloudy with a Chance of Meatballs) and should-be-too-many-but-isn’t screenwriters Michael Bacall (Project X, Scott Pilgrim vs. the World), Oren Uziel, Rodney Rothman, and Jonah Hill (yup, same one) don’t get it all 100 percent right: there’s an aside with Rob Riggle (The Internship, The Lorax) and Dave Franco (Bad Neighbours, Now You See Me), bad guys returning from the first film, that is a little uncomfortable and never quite genuinely funny or as enlightened as I think it thinks it is. But it’s still not quite the same old sort of retrograde shit so many other similar movies end up with, more a they’re-at-least-trying-to-be-smarter-but-they-failed sort of thing. (If you’ve got that many guys working on your script anyway, maybe make room for one more, maybe a woman? It’s an idea!)

It’s almost made up for by a long game of a joke that addresses the frequent hypocrisies of how men approve — or don’t — of other men’s sexual conquests. And also by the just plain niceness of the humor. So much of what passes for comedy coming out of Hollywood is meanspirited, taking easy swipes at the powerless and downtrodden. 22 Jump Street punches up, at the excesses and inanities of Hollywood, and not down, at targets who don’t deserve it, and even then, it’s never cruel about it.

Ok, you’ve talked me into it. I was never gonna see these. But here I go…

Me too – didn’t read the first review because, you know, stupid idea, but The Lego Movie, geez, everybody says that’s good, and now this. As KingNewbs says, “What’s this world coming to?” A glimmer of hope in the scriptwriting world…

I thought the first one was just ok. Sure, it had some funny moments, but it also had Jonah hill. I still can’t stand him.

I think you can stand them — or else I don’t share your use of the words “I can’t stand him…”) I’m not sure if memory serves, but I think it was your review of the first film that convinced me to go. And my wife and I loved it.
But, then: (“I’m six, I’m only six!” — Jonah Hill reference from U.S. show SATURDAY NIGHT LIVE.)

This two-man director team Christopher Miller and Phil Lord have a real fantastic thing going. THE LEGO MOVIE was way too good for what it was supposed to be. And as you say, the first JUMP STREET was hilarious. I watched it knowing it was going to be terrible, and it didn’t end up being funny in that “oh it’s not so bad” way, it was legit clever. What the hell are these two idiots doing in Hollywood? Don’t they know they’re not supposed to make movies like these, that are actually good?

Man! What’s this world coming to.

Don’t forget Cloudy With a Chance of Meatballs, which in my opinion is a stone cold classic of the genre. Lord & Miller are so incredible that they seem to be trying to handicap themselves, working strictly on elevating projects that seem guaranteed to be crap.

Or maybe they’re the Directing Doctors? Like the uber Script Doctor Joss Whedon (allegedly) getting helicoptered in on the set of Thor: Dark World to fix the movie in real time.

“If you have an obvious-crap-movie-turning-out-to-be-crap problem, if no one else can help, and if you can find them, maybe you can hire… the Lord & Miller Team.”

Well, we do have an A-Team franchise that needs a well-done sequel to bring the crowd back…

How much does it matter if you didn’t watch the series?

Doesn’t matter at all.

Love your enthusiasm! I only went to see this movie because of the boyfriend, I find sequels tiring too… But, wow! Did I laugh? I was loud and I even screamed when they’d end up flying through some place or at the very beginning when Schmidt almost made them both fall off that truck. I can’t wait to own this one!

“Say something clever when you throw it…” Animal House Meets The Wire. A clever, enjoyable movie in a sea of cinematic crap. The feel-good movie of the summer. The anti-sequel. And Tatum has obviously played some football. Him and his QB buddy were right out of “Remember The Titans”. (Anybody notice that one of the villains was “pancakes house” from Fargo?) This movie produced genuine gut chuckles from start to finish. I guess even funnier for me because I really like Jonah Hill (in everything he’s been except Wall Street). Channing and Jonah were hilarious in their NBA ads as well during the Spurs-Heat series. Four stars… Joe Bob sez check it out.

I thought Jonah Hill was fantastic in The Wolf of Wall Street and gave me a ton more respect for him. 22 Jump Street surprised me, I just loved it ****, as compared to *** for 21 Jump Street.

OMG I finally watched this. Holy crap those closing credits – I pulled something in my back from laughing. I’m not kidding. I was laughing SO HARD I actually injured myself. 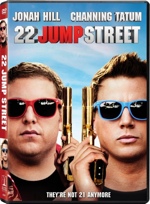 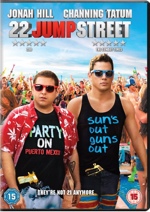 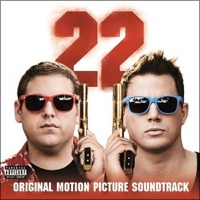 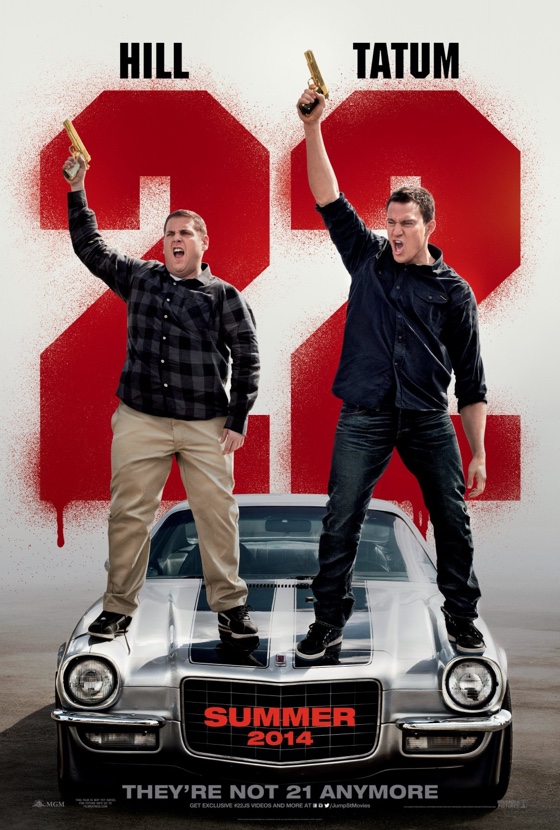