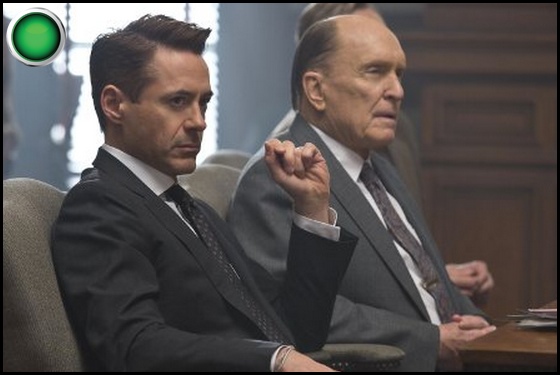 It’s kind of amazing how many classic Hollywood melodrama clichés are crammed into The Judge: father-son angst; small-town life; conundrums of American justice; there’s even baseball and pie. I’d even call it downright awards bait-y, except Robert Downey Jr.’s Oscar clip features too many fucks to work on network television. And yet, The Judge manages to avoid feeling as supremely calculated as it is, perhaps because Downey Jr.’s snark and Robert Duvall’s crusty pragmatism won’t allow it: the nearly trademarked qualities of the actors’ onscreen charisma vaccinate against it. So even as they play out a warming of the estrangement between the younger’s hot-shot Chicago lawyer and the elder’s rural Indiana judge, the film never gets sappy with it. A flying visit home for Hank Palmer (Downey Jr.: Chef) for the funeral of his mother turns into a longer stay when Dad (Duvall: Jack Reacher) — “I wish he died instead of Mom” — is accused of a hit-and-run that killed a former felon whom everyone agrees was “the biggest mistake” of the judge’s career… and so The Judge is also a murder mystery with only one suspect, because both the elder Palmer’s respectability and the fact that something is clearly medically wrong with him — could it be incipient Alzheimer’s? — throws doubt on his culpability. Will Hank, who has not been overly “encumbered” by legal ethics in the past, find a way to earn the respect of his straight-arrow father as he represents Dad in the very court Dad has presided over for decades? Will he get the hug from Dad he has long yearned for? You already know the answers, but getting there is entertainingly diverting, thanks to the wonderful cast, which also includes Vera Farmiga (The Conjuring) as Hank’s high-school girlfriend — the screen sparks when they appear together — Vincent D’Onofrio (Escape Plan) and Jeremy Strong (Parkland) as Hank’s brothers, and Billy Bob Thornton (Parkland) as the prosecuting attorney Hank squares off against. As long as you’re not expecting to be surprised, it all works beautifully.

See also my #WhereAreTheWomen rating of The Judge for its representation of girls and women. 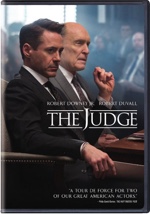 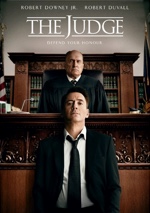 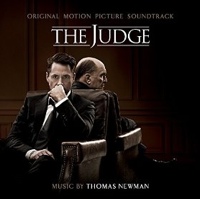 When you purchase or rent almost anything from Amazon US, Amazon Canada, Amazon UK, and Apple TV, Books, and Music (globally), you help support my work at Flick Filosopher. Please use my links when you’re shopping. Thank you!
The Judge (2014)