Toying with the Past

When I think what that Han Solo action figure would be worth today… If only my brothers and I hadn’t actually opened the package. And frozen him in carbonite (which on Earth looks strangely similar to water ice). And buried him in the sands of Tatooine (i.e., the backyard). If only we hadn’t actually played with it. One quick eBay auction later, we could all be lounging on a beach in Tahiti, maybe.

Toy Story 2 makes me feel a whole lot better about this, however. Toys want to be played with, I know now.

Funnier and more touching and meaningful than its predecessor, Toy Story 2 is the rare sequel that improves upon its progenitor — and, considering how wondrous Toy Story was, that’s saying something. Toy Story — as funny and fun as it was — was also bursting with joy, with the delight the filmmakers obviously took in bringing a roomful of toys to life. Toy Story realized that secret childhood fantasy we all had, that our toys had lives of their own, that they played with one another when we weren’t around.

Toy Story struck more chords with adults, I suspect, than with kids, and that’s even truer for Toy Story 2. Youngsters don’t have the perspective yet on how much their toys really mean to them: how they give flight to the imagination, how they become our friends and confidants. The Toy Story movies aren’t about our childhood toys as much as they are about the nostalgia for our childhood toys. And adult nostalgia is precisely what fuels Toy Story 2.

Woody (the voice of Tom Hanks: You’ve Got Mail, Saving Private Ryan), the cowboy doll, inadvertently finds himself an unwilling participant in the one thing that strikes terror into the tiny plastic hearts of old and broken toys: a yard sale. Al McWhiggin (the voice of Wayne Knight: Tarzan, Hercules), fanboy and owner of Al’s Toy Barn, recognizes the cash cow in Woody — with the “original handpainted face!” — and spirits him away. Back at Al’s apartment, Woody — confused and lonely — uncovers the secrets of his origins: He began life on Woody’s Roundup, a kids’ marionette-puppet show from the 50s. Al has a complete collection of Woody-phenalia, from cardboard standups and lunchboxes to issues of TV Guide and Life, as well as the de rigueur videos of every episode, which he watches on an old 50s-era television. Woody, in fact, is what makes Al’s collection whole — and extremely valuable. Now that Al has all the dolls from Woody’s Roundup — including Bullseye the horse, Stinky Pete the Prospector, and Jessie the yodeling cowgirl — he can sell the entire lot to a toy museum in Japan.

Woody, of course, just wants to get back to his boy, Andy, but the Yosemite Sam-ish Pete (the voice of Kelsey Grammer: Animal Farm, Anastasia) and Jessie (the voice of Joan Cusack: Arlington Road, Runaway Bride) are determined to win him over. Woody is the only hope for Pete — who, sadly, has never been taken out of his box — and Jessie — who doesn’t want to go back in her box. With no child to love them, they have aimed their meager hopes on the toy museum. And they can’t go there without Woody.

Toy Story 2 is like a morality play for pop-culture-loving Generation Xers, who turn toys into little idols, displaying them as expressions of our personalities. (I’ve got my Star Trek and X-Files Barbies and Kens on view in my office, and they ain’t never coming out of their boxes.) But if love is what makes toys truly come alive, what are we doing to them? I’m not anthropomorphizing — I don’t actually think toys can feel. But I do find it ironic that if as a child I was like Andy, today I’m much closer to being Al McWhiggin. One of Toy Story 2‘s themes is about letting childhood things go — is that what many of us fail to do? I’ve grown beyond the need to play with toys — my imagination finds much grander grounds in the arena of my fiction — so how do my toys still speak to me?

There’s no doubt that Toy Story 2 is aimed more at the Als of the world than the Andys. As a cadre of Andy’s toys — Hamm the piggy bank (the voice of John Ratzenberger), Slinky Dog (the voice of Jim Varney), Mr. Potato Head (the voice of Don Rickles), and Rex the dinosaur (the voice of Wallace Shawn: My Favorite Martian), all led by Buzz Lightyear (the voice of Tim Allen) — attempts Woody’s rescue, the audience is treated to numerous and hilarious salutes to all manner of GenX obsessions: Star Wars, video games, Jurassic Park. There are references to pop-culture phenomena like Forrest Gump, This Is Spinal Tap (watch for the dial that “goes to 11”), beach-party movies, every cornball sci-fi concept like the “evil twin,” and even the craze that surrounded the first Toy Story.

Toy Story 2 — like its prequel — is a clever and loving tribute to the trappings of childhood that will speak most to those adults who haven’t quite given those trappings up. 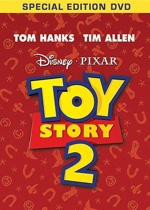 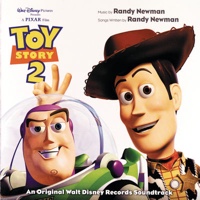 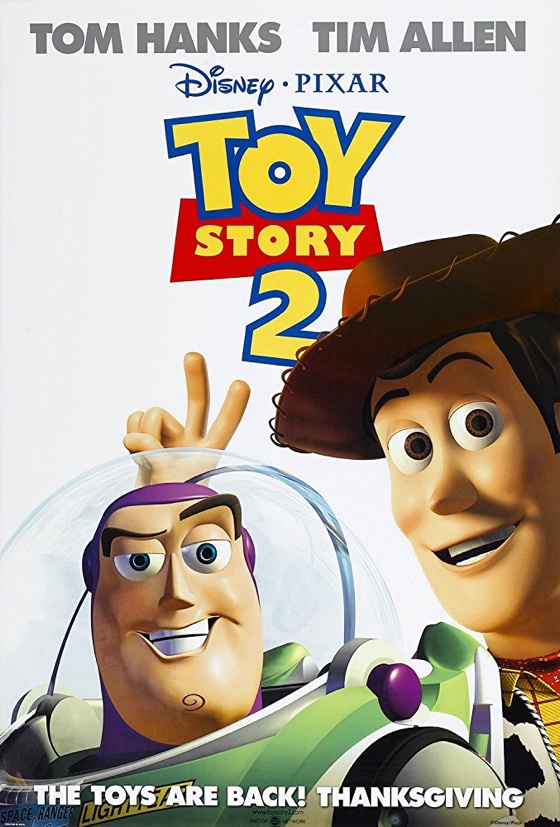