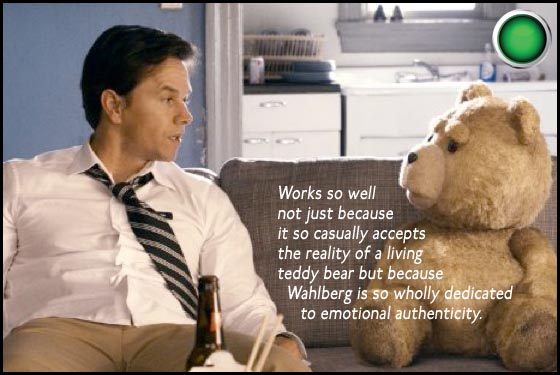 I’m “biast” (con): with the exception of Blue Harvest, I’m not a fan of Seth MacFarlane

“I need a man, not a little boy with a teddy bear.”

This is a shocking thing to hear in a piece of American pop culture in the early 21st century. A beautiful woman — here played by Mila Kunis — not tolerating the adolescent manchild antics of the doofus she’s attached to — here played by Mark Wahlberg — but instead actually calling him on it?

Well… I mean… this never happens. Does it? I confess I have not consumed the entire sitcom oeuvres of Kevin James and Adam Sandler and Ray Romano — not to mention every TV ad for floor wax and breakfast cereal — because if I had, my brain would be mush. But isn’t it usually the beautiful woman looking on adoringly and sighing with utmost tolerance and saintly acceptance while her 40something man puts the baby’s diaper on the wrong end or burns the boiling water or can’t commit to anything beyond a weekend on the couch playing Xbox? Because, you know: Men.

Many — I’ll venture to extend that to most — actual human beings wouldn’t recognize themselves in that scenario, and yet it endures. But now I wonder whether Ted might be a teeny crack in that anti-man, anti-woman monolith of entrenched pop-culture sexism. Because the film is closing in on $200 million at the box office in North America — it finally opens today in the U.K. — while Adam Sandler’s latest have flopped. Dare I hope?

Or are audiences just getting a kick out of the vulgar, pot-smoking, foul-mouthed teddy bear? Crap, it’s that, isn’t it? Crap.

The thing about Ted that is most gratifying is that even while it’s giving Wahlberg’s John — and by extension all the manchildren who populate our cultural headspace — a boot in the ass, it does so in a way that’s warm, generous, and human. John’s not a caricature, he’s not a bad person, and it’s easy to see why it’s hard for him to give up his childhood. Yeah, he’s miserable in his crappy dead-end job. Yeah, he likes smoking weed. It’s not these things that mark him as stuck in adolescence — these are sane responses to today’s shitty world. It’s that his best friend, beyond Lori (Kunis: Black Swan, Date Night), is the teddy bear he’s had since he was a kid.

There’s a sly sort of brilliance in Seth MacFarlane’s creation here, as cowriter (with his regular TV collaborators Alec Sulkin and Wellesley Wild), as director (making his debut both with live-action and in the feature format), and as the voice of Ted. Because, see: MacFarlane’s Family Guy annoys me with its pop-culture non sequiturs, random references that are meant to amuse merely for being tossed into the mix. But here, in Ted, MacFarlane seamlessly weaves the pop-culture snarking into the narrative in a way that is both hilarious and touching. The opening sequence of the film — in which lonely, bullied young John (Bretton Manley) wishes his new Christmas-present teddy bear into actual living, breathing life — is an absolutely pitch-perfect pastiche of 80s holiday fantasy movies. It’s the sort of thing those of us around the same age as John (and MacFarlane) would simultaneously now see as lame and ridiculous but also glowing with nostalgic memories… if it had been a real film, that is. And so Ted becomes a kind of response to the absurdity of our childhood cinematic fantasies: sure, it’s cute for a little boy to wish a teddy bear to life, but what happens when that boy grows up, and the bear grows up with him, in mind and spirit if not in fiberfill-stuffed body?

Ted today is kinda like the creepy child-in-body-only vampire Claudia from Interview with the Vampire. Only much nicer, his horndogness and general crudity aside. (Ted is not all pointless crudity: one throwaway line — thank you, MacFarlane! — gets closer to an appreciation of female sexuality than most mainstream movies dare, with its deliciously earthy suggestion that a penis-less teddy bear could be a better lover than some human men. It’s a clever way to undercut the male sexual arrogance that usually fills movies like this.) Ted is a veritable embodiment of the stock “best friend” character who is over-the-top obnoxious but utterly harmless. His relationship with John isn’t any different from what we’ve seen in every buddy “bromance” story of late: playing video games, getting drunk, yelling at stupid beloved old movies on TV. It’s just that Ted is a stuffed toy. It’s a genius metaphor for this entire subgenre… and I count this as the third movie this year — after The Cabin in the Woods and Seeking a Friend for the End of the World — that appears to take a subgenre to its ultimate expression so that it’s tough to see how any subsequent film could top this.

Ted works so well not just because the entire story so casually accepts the reality of a living teddy bear — in fact, Ted now suffers the banal existence of a former D-list celebrity who both loves and loathes his own dreary notoriety — but because Wahlberg (Contraband, The Other Guys) is so wholly dedicated to the emotional authenticity of John’s situation. He sells the existential power that comes from a threat, to Ted, that John will trade him in for a Teddy Ruxpin. (Aha! 80s pop culture ref that works in context!) He owns the enthusiasm that comes with a celebrity encounter that fulfills a fan fantasy John and Ted have shared for decades. (Aha! Another one!) He is so committed, in one particular scene late in the film that I will not spoil, to the corporeal reality of Ted the living teddy bear that it becomes one of the purest expressions of physical comedy I’ve seen in a long time.

Alas, Ted isn’t perfect. The ending is… problematic, as if MacFarlane knew what he needed to do but lost his nerve at the last minute, which is a shame. This could have been a classic. But even missing that certain oomph, this is still one of the best times I’ve had at the movies this year. Not the least because it could be the beginning of the end of a pop culture trope that has long overstayed a welcome it never enjoyed. 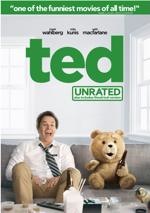 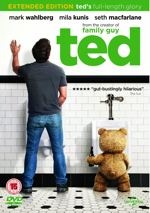 When you purchase or rent almost anything from Amazon US, Amazon Canada, Amazon UK, and Apple TV, Books, and Music (globally), you help support my work at Flick Filosopher. Please use my links when you’re shopping. Thank you!
Ted (2012)