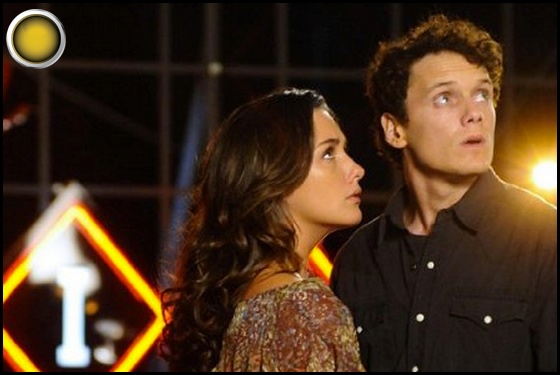 It feels smaller and more rushed — and less plausible — than it should, but Anton Yelchin is charming, and the snappy comic tone sometimes works.
I’m “biast” (pro): like Anton Yelchin

Odd Thomas — that is his legal name — sees dead people. He also sees “bodachs,” sort of ectoplasmic reptilian spirit beings that feed on carnage. Usually he sees these one at a time, hanging around people who are about to be dead, so when suddenly there’s a shit-ton of bodachs oozing all over one particularly weird creepy guy in the diner where he works as a cook, he knows that something big and terrible is coming down the pike. Soon. And then he starts seeing the bodachs everywhere. As an amateur paranormal detective, Odd feels it is his moral duty to try and stop bad things from happening, but this is bigger than any badness he’s encountered before. So it’s a little, well, odd that Odd Thomas feels small: it’s like the slightly bigger than usual season-finale episode of a cable TV series. Or like a novel that’s been somewhat too faithfully adapted, Odd’s running voiceover standing in for a first-person narrative perspective. (I swear I did not know before my supernatural cinema sense hinted at it that this is, in fact, based on a 2003 book by Dean Koontz that did spawn a book series.) Written and directed by Stephen Sommers, this is nowhere near as delightful as his big-fun The Mummy, but far superior to his godawful messes G.I. Joe: The Rise of Cobra and Van Helsing. And if it feels like a TV show, it’s still a TV show starring the completely charming Anton Yelchin (Star Trek Into Darkness) as Odd, and if it can’t ever quite find the right tone, when it does settle temporarily on “snappy, breezy comedic,” it’s pleasant enough, especially in Odd’s interactions with the few people who are aware of his talents, his girlfriend, Stormy (Addison Timlin: That Awkward Moment), and the local police chief (Willem Dafoe: John Carter). There’s an interestingly uniquely American aspect to the big terrible thing that’s coming, too (this is all happening in a small California town). Perhaps the movie’s biggest mistake is in rushing to explain what it’s all about, and being less than plausible in the explanation. Ectoplasmic reptilian bodachs that feed on carnage are one thing: they’re only watching. Those whom they’re watching don’t quite pass the realistic evil smell test they’re intended to. 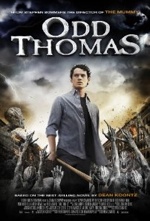 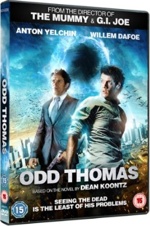 When you purchase or rent almost anything from Amazon US, Amazon Canada, Amazon UK, and Apple TV, Books, and Music (globally), you help support my work at Flick Filosopher. Please use my links when you’re shopping. Thank you!
Odd Thomas (2014)