Confused suspense drama starts out gripping and descends into a moral muddle that a very good performance by Michael C. Hall cannot quite overcome.
I’m “biast” (pro): nothing

Richard Dane once shot a man in his living room, just for having B&E’d into his home where his wife and their young child were sleeping in the middle of the night. But Richard (Michael C. Hall: Gamer, Paycheck) is a decent man, and though the police assure him that he was well within his rights to protect himself and his family, and he is certainly not going to be charged with any crime, he is shaken to the core.

This isn’t a thing that The Movies usually deal with, not on the scale that Cold in July does (at least at first): how regular people react to extreme violence, which is hardly even with the same sort of casual aplomb that characters in movies do. Director Jim Mickle and his regular screenwriter Nick Damici — they made the brilliant Stake Land and even better Mulberry Street together — ensure that we appreciate the terrible aftermath of even a perfectly reasonable, perfectly justifiable action. July lingers with the aftermath, in fact, in a way that leaves us shaken: the next day, Richard and his wife, Ann (Vinessa Shaw: 3:10 to Yuma, The Hills Have Eyes), have a literal bloody mess of gore and brain matter to clean up; the pile of blood-splattered household stuff that sits on the curb awaiting collection by the garbagemen is a cinematic image that I don’t think I’ve seen before, and one that won’t soon leave me.

But the upset to the ordinariness of the Danes’ lives is not over. Now they’re being terrorized by a monster of an ex-con in Ben Russell (Sam Shepard [Out of the Furnace, Killing Them Softly], who is paralyzingly scary here), the father of the man Richard shot, who is out for revenge. Dear god, but the first half of Cold in July is some of the most tense, most menacing stuff I’ve ever seen onscreen; this is set in East Texas in 1989, and even the 80s-style electronic score has a sort of ominous horror to it. And just when I thought there was nowhere else for it to go, it opens up into unexpected new avenues of gripping suspense.

Unfortunately, that’s also where Cold in July started to fall apart for me. The bleak yet realistic tone gets overlain with black comedy in the form of flamboyant private detective Jim Bob Luke (Don Johnson: The Other Woman, Django Unchained) — an entertaining character, yet one who seems to arrive from some other film — and a change of heart for Richard, who shifts from being a good man caught in a bad place to a good man deliberately driving himself toward a worst place, and for no reason that we can see. Unless we’re meant to infer that violence and vengeance become their own sort of reward for even the gentlest and kindest of men, once they get a taste of it. From Richard’s very understandable moral quandary, in which the desire to protect his family is mixed up with guilt over killing another human being, July becomes a moral muddle that seems to give a stamp of approval to the notion there are some people it’s okay to kill and get satisfaction from your murder of them, that there are some people you shouldn’t feel at all guilty for killing.

Perhaps the novel this is based on, by Joe R. Lansdale, makes Richard’s change of heart a horrific descent into hell for him, or something. But the movie leaves little room for Hall — who is excellent here — to find anything nuanced in where Richard ends up. And we are left with the disappointing sense that what began as an unexpected exploration of the grim impact the power of life and death exerts on those who wield it has just descended into yet one more clichéd, cartoonish, and gleefully bloody celebration of violent vigilantism.

I disagree, I loved the movie, thought it was exciting and fun.

Fun? Can you explain what you found fun in this movie? 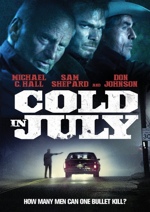 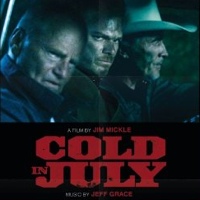 When you purchase or rent almost anything from Amazon US, Amazon Canada, Amazon UK, and Apple TV, Books, and Music (globally), you help support my work at Flick Filosopher. Please use my links when you’re shopping. Thank you!
Cold in July (2014)