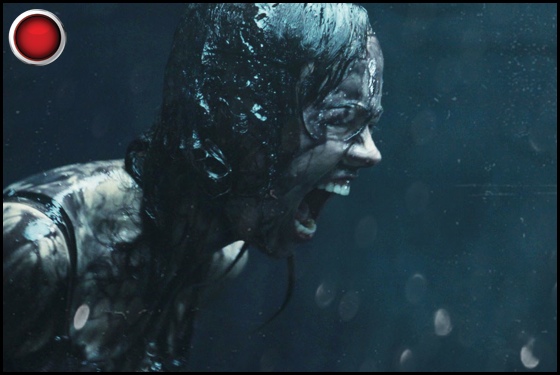 Utterly empty. It’s aware of the tropes of the new mythos of alien abductions, but makes no attempt to find anything even the slightest bit fresh in them.
I’m “biast” (pro): nothing

It’s literally a Cabin in the Woods scenario in which the hapless 20somethings invoke — among all the many scary options for their own mass slaughter they didn’t realize they had — an alien abduction, and without Bradley Whitford and Richard Jenkins having made bets on it. When I said that Cabin “render[ed] all past and future examples of the genre superfluous,” this is precisely the sort of movie I was imagining could no longer be made in its wake… and frankly I’m astonished that anyone had the gumption to do so. Filmmakers Colin Minihan and Stuart Ortiz apparently have no fear of being laughed off the screen; they call themselves The Vicious Brothers, after all, and that is so adorable, like what a couple of 12-year-olds with Dad’s camcorder might think is an edgy nom de film. Extraterrestrial is visually much slicker than what those kids might make, but it’s utterly empty, and shows no evidence of adult involvement in its production. It introduces its heroine, April (Brittany Allen), ass-first and makes jokes about anal probings, as you might expect from pubescent filmmakers. It’s aware of the tropes of the new mythos of alien abductions — animal mutilations! — but makes no attempt to find anything even the slightest bit fresh in them. It thinks it’s being horrific in its depiction of what goes on when a human gets abducted by aliens, but it’s nothing compared to the comparable nightmare-inducing sequence in the 20-year-old Fire in the Sky. It has nothing to say, except this: “Ladies, don’t be a bitch and turn down a marriage proposal from your nice-guy boyfriend, because he might get abducted by aliens and then you’ll be sorry.” I kept waiting for the twist that would indicate that yes, The Vicious Brothers have seen Cabin in the Woods and have a response to it, a moment that might make their movie worth anyone’s time. Instead, all they have is a lame X-Files reference.

Alien mutilations of animals are new? I’d have called them “tired old 1970s tropes”. Maybe the kids have forgotten.

The alien abduction mythos is new, in the grand scheme of mythology. Only 75 years old or so. That’s what I meant.

“it’s nothing compared to the comparable nightmare-inducing sequence in the 20-year-old Fire in the Sky. ”

That’s interesting since Fire in the Sky was PG-13 and this is rated R.

Fire in the Sky freaked me out as a kid. This prob would too as I was terrified of being abducted by aliens as a kid.

It doesn’t appear to be rated at all by the MPAA, actually, though it would be R. There’s a bunch of gore that has nothing to do with alien abduction.

Indeed, this film is tosh. I was in a theatre in London where only 8 people were watching. 4 people walked out. I waited it out in the hope of a miracle. All the characters were seriously annoying and there was no real development in the story what-so-ever. The end scene with the smoking man was definitely an x files reference and didn’t fit and felt random. This film is lost. A disaster. 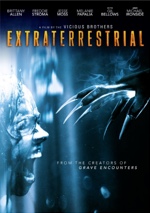 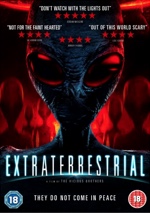 When you purchase or rent almost anything from Amazon US, Amazon Canada, Amazon UK, and Apple TV, Books, and Music (globally), you help support my work at Flick Filosopher. Please use my links when you’re shopping. Thank you!
Extraterrestrial (2014)