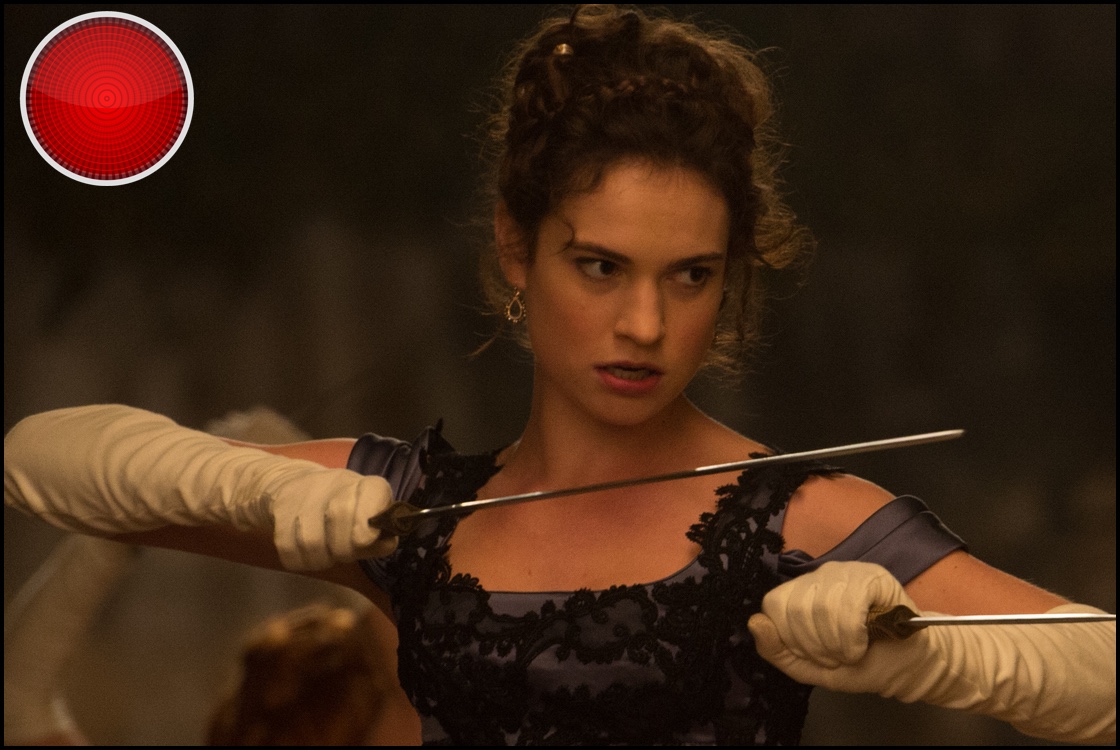 A Mr. Collins of a movie: fatuous, self-important, and nowhere near as smart or as elegant as it thinks it is. There isn’t a lick of wit to be found here.
I’m “biast” (pro): nothing

I have read the source material (and I hate it)

Even more so than something comparable could be said about the unreadable “novel” it is based on, this is the cinematic equivalent of that Chinese-restaurant game, the one where you add “in bed” to whatever it says on your fortune cookie. Pride and Prejudice… and zombies. That is the entirety of the joke, and it’s just as stale as your fortune cookie. Of course, the germ of a potentially interesting idea is contained in this concept: Why do zombie apocalypses always seem to happen in the present day? Why not set one in the past? But understanding the answer to that first question — “Because zombie stories are metaphors for current cultural woes” — would be essential to crafting a zombie story set during the English Georgian era and making it work on even the shallowest level. Jane Austen’s novel is all about the culture of her day, and its woes, but writer-director Burr Steers (Charlie St. Cloud) has no use for Austen’s outlook: perhaps he doesn’t even understand it. Austen would find nothing droll in this Elizabeth Bennet (Lily James: Burnt) and this Mr. Darcy (Sam Riley: Suite Française) engaging in a physical battle, with bladed weapons, as a way of expressing the burgeoning attraction between them that confounds and discomforts them each separately; this would be the height of impropriety. And yet almost none of the cast seems to appreciate that they are appearing in what is ostensibly a comedy; even Austen’s zombie-free version is meant to be funny. The sole exception is Matt Smith (Terminator Genisys) as the ridiculous Bennet cousin Mr. Collins: the screen lights up only when he is on it. It’s unintentional, though, that this is, in fact, a Mr. Collins of a movie: fatuous, self-important, and nowhere near as smart or as elegant as it thinks it is. It’s meant to be amusing, I suspect, that Mr. Bennet’s (Charles Dance: Victor Frankenstein) advice to his daughters is “Keep your swords as sharp as your wit.” Except there isn’t a lick of wit to be found here.

Matt Smith is brilliant in this and it’s a pity his performance is hung around such a befuddled movie. It’s almost as if he wandered onto the set after clocking the script and decided that the only way to play it was as a big winking laugh with a touch of ‘Carry On’ but failed to let the rest of the cast in on the joke. I would have quite liked to have seen that movie but this one is bloodless and far too self satisfied. Such a shame as I think Matt’s performance is award worthy but at least it’s a triumph for him if not for everybody else involved.

@Maryann Johanson: I agree with you that Matt Smith was the notable exception of this very weak film. In fact, if they had eliminated the Jane Austen story line entirely, and just kept the same time period, they might have fared better.

On another note your reviews could a copy editor. Also, “biast” is not a word. Did you perhaps mean “biased” ?

An in-joke. A reference to a whining and poorly written complaint about one of MaryAnn’s reviews. She appropriated it for a ready bit of shorthand.

Ah! Gotcha. I just clicked on her “critics minifesto” link. Thanks. :)

On another note your reviews could a copy editor.

Possibly. But I am not the writer of the article and that is the one that is needed. ;)

Feel free to point out typos or grammatical errors. I’ll fix them. I’m a professional copyeditor and editor as well as a critic, and I think I do a damn good job of posting clean copy. But no one is perfect, and editing your own copy is tough. (And still, I do a pretty good job.) But if you have any ideas about how I could afford to hire a copy editor when I can’t even pay myself a living wage, I am open to suggestions. Or were you just being snarky for no good reason?

I liked the film for the very reason you did not. I don’t think it was supposed to be funny. It was more of a “What if…” scenario that was fun in its dichotomy.

That Matt Smith fellow MaryAnn mentions sounds awesome. What a shame that he isn’t in some TV show so that we can all see more examples of his work. ;-)

He’s a former Doctor Who–check out his work there.

MaryAnn used to have a link on the home page that led to all her Doctor Who reviews. (Tonio posted pretty regularly in the comment threads.) She’s been really disappointed with the show lately, and the link seems to have vanished once she stopped reviewing the series.

It might come back. But hardly anyone clicked on it.

Yes, I thought it fairly obvious from the emoticon in my original post that my comment was meant to be a joke but apparently it wasn’t obvious enough. Nor much of a joke.

She answers that here:
https://www.flickfilosopher.com/2009/11/question-of-the-weekend-what-book-are-you-reading-right-now-and-whats-up-next.html

Because it is unreadable.

I read the book and really enjoyed it, so I came at this from the opposite perspective from MAJ, but with many of the same conclusions. Both Austin’s original and Seth Graeme-Smith’s remix are funny, and much of the humor lies in the disconnect between what is being said and what is actually going on. I didn’t hate this movie, primarily because I’d never even heard of Lily James before (never seen a single frame of Downton Abbey I’m afraid, except for a picture that went around the internet where someone had left a water bottle on the mantle). And I really liked her here. But outside of Matt Smith, who understands he’s in a comedy, and Lena Headey, who’s always awesome in everything, it was played too straight. And not straight horror movie, straight historical fiction. Which was just a weird choice. I did think the zombies were supposed to be a commentary on the class system – but that just didn’t gel into anything coherent, a real missed opportunity. Should have been a cult classic but didn’t quite work. And while usually I criticize movies for being too long and bloated – looking at you, Peter Jackson – this one was too short. It could have used 10 more minutes of excised Austin subplots, and maybe 5 or 10 more of zombie-slaying action. Still, it was often visually arresting – the shot of the sisters marching into the dinner party massacre in wedge formation, swords drawn, will stay with me for a long time.

I just watched this and I liked it. Maybe because it brought to mind the (serious) 2005 version with Keira Knightly. I enjoy reading MaryAnn’s reviews, mostly to see if she likes a movie that I liked. And if not, thats okay – she usually makes her points well.

So I checked both reviews out and found from her earlier review that she loved the earlier movie and professed to like Austin’s novel: “But this movie version is like Austen’s novel in that every time you read it, it’s so gripping and so expert a portrait of insecurity and uncertainty and denial that it seems possible that this time around, Lizzie and Darcy will not, in fact, end up together.” So why, Mary Ann, do you say you dislike the novel in this zombie review (“the unreadable ‘novel’ it is based on”)?

Or have I misunderstood something? If so, apologies.

The “unreadable novel” she’s referring to is Seth Graeme-Smith’s Pride and Prejudice and Zombies, which is a parody of Austen’s novel and is the basis for this film.

mostly to see if she likes a movie that I liked. And if not, thats okay – she usually makes her points well.

I sincerely applaud your mature attitude. We need more of that around here! :-)

Okay, got it guys.

It’s Seth Graeme-Smith’s novel that is unreadable. Not Austen’s!

Ironically, if this film were to be released today, its climax would be seen as a metaphor for Brexit. Of course, that still would not improve the plot — which seems deliberately designed to frustrate both Jane Austen fans and action flick aficionados — but it would probably give the critics something to talk about.

Apart from that, I echo the sentiments about Matt Smith and I find myself a bit sorry that Lena Headey’s character was so wasted. Apart from posing for a portrait that seemed inspired by a nineteenth century version of S. M. Stirling’s Draka novels, she really doesn’t have a whole lot to do in this flick apart from teasing the audience with the possibility that the whole thing might not turn out to be an unwatchable mess after all. 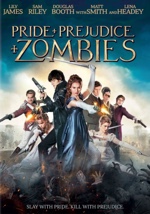 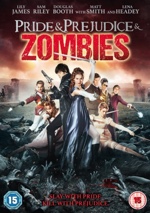 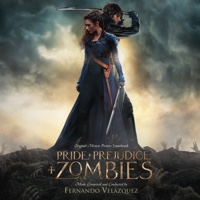 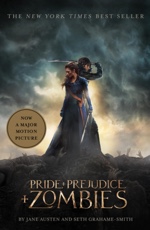 When you purchase or rent almost anything from Amazon US, Amazon Canada, Amazon UK, and Apple TV, Books, and Music (globally), you help support my work at Flick Filosopher. Please use my links when you’re shopping. Thank you!
Pride and Prejudice and Zombies (2016)