MaryAnn’s quick take: Astonishing: sometimes oddly beautiful but mostly like sci-fi horror. An anti-meditation nightmare, a call to arms if only we were ready to finally address our thoughtless impact on planet Earth.
I’m “biast” (pro): deeply worried about what we’re doing to the planet
I’m “biast” (con): nothing
(what is this about? see my critic’s minifesto)

You may be aware that geologists divide the history of planet Earth into various eras, which are sometimes further divided into periods, which are in turn sometimes further broken down into epochs. You’ll have heard of the Jurassic, for example, which was the middle period of the Mesozoic era. We are currently living in the Holocene epoch (which began around 11,750 years ago with the most recent retreat of the glaciers) of the Quatenary period of the Cenozoic era.

Now, some scientists are suggesting that we have entered a new epoch, the Anthropocene, defining the timeframe when human activity has become the dominant force shaping the planet. This includes global warming driven by our use of fossil fuels, but there’s so much more than that. “Humans now change the earth and its systems more than all natural processes combined,” narrator Alicia Vikander (Tomb Raider, Jason Bourne) informs us in Anthropocene: The Human Epoch. Stunning, somber visuals from directors Jennifer Baichwal, Edward Burtynsky, and Nicholas de Pencier bring us the monumental, often monstrous scale upon which we humans are altering the only home we have, in ways the full impact of which we cannot yet truly foresee, and have barely even thought about.

These landscapes are eerie and literally unnatural: not a part of nature but ones transformed, sometimes out of all recognition, by our hands.

What is happening here and now is astonishing, occasionally oddly beautiful but mostly appalling. After exploring the industrial hellscape of Norilsk, Siberia, the most polluted city in Russia thanks to its focus on heavy-metal smelting, the colossal extraction of marble at the Carrara mine in Italy looks equally shocking, even if the clean white lines of the precious rock are deceptively sleek. Machines tearing up the ground in Germany to get at the Earth’s prized materials look like metal creatures out of sci-fi horror, while the African megachurch that holds one million people barely seems possible even in the imagination. People scavenging in incomprehensibly massive landfills is a vision out of a dystopia, yet real; ditto others building incomprehensibly massive seawalls to hold back rising oceans. The landscapes are eerie and literally unnatural: not a part of nature but ones transformed, sometimes out of all recognition, by our hands. From the “technofossils” — ie, plastic — we are laying down in the planetary strata to the decimation of the Earth’s other living creatures in the human-caused ongoing sixth great extinction, nothing we see here can be said to be benign if we intend to survive as a species and retain some level of civilization.

Anthopocene is an anti-meditation, a dreamy nightmare that would be a call to arms if we were ready to finally address what we’ve done and are continuing to do to the planet. Even if nothing here is news to you, seeing how hard we are treading upon the planet laid out so bare is sobering. Can we fix what we’ve broken? I’d like to share in the sliver of hope that the film finds. Maybe the current coronavirus pandemic and how it has kicked out from under us at least parts of the house of cards we’ve been teetering on is the beginning of real change. I’m not betting on it yet… but we’ve all already cast our dice and bet everything.

viewed for the second time as part of Ed Film Fest at Home, the digital-only 2020 Edinburgh International Film Festival

Anthropocene: The Human Epoch was the Alliance of Women Film Journalists’ Movie of the Week for October 4th, 2019. Read the comments from AWFJ members — including me — on why the film deserves this honor. 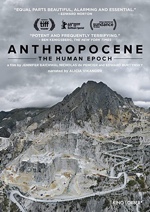