It’s not exactly emotionally enthralling, but there’s still much that’s intriguing in this portrait of a woman who refused to let herself be pushed out of frame.
I’m “biast” (pro): nothing

This “fictional account inspired by real events” isn’t exactly emotionally enthralling, which I suspect is an unintended side effect of director Olivier Dahan (La Vie en Rose) and screenwriter Arash Amel consciously avoiding the “fairy tale” Hollywood star Grace Kelly’s life became after she married Prince Rainier of Monaco in 1956. Though why they imagine that “dour” and “chilly” equals “real,” I don’t know. That said, there’s still much that’s intriguing in this portrait of a woman adapting her skills to a new situation, in its acknowledgement — still a subversive one half a century later! — that women need more than a husband and kids to be happy, and in its sly look at how women wield power in whatever ways they can. Five years after her marriage and retirement from movies, Alfred Hitchcock (Roger Ashton-Griffiths: You Will Meet a Tall Dark Stranger) comes to Monaco to visit Grace (Nicole Kidman: The Railway Man) and pitch the lead role in Marnie to her, and she is tempted. Rainier (Tim Roth: Arbitrage) is supportive, but the palace PR machine worries that her taking just one job, not even a full-time return to her career, will look like she’s abandoning her husband, which would be particularly bad now that Monaco is in a pissing contest with France over taxes and the small municipality’s generous-to-business economic environment. (Can a woman work and have a family at the same time? Funny how no one ever asks this of a man.) Grace had already been making herself a bit of nuisance, daring to express even mild political opinions in the presence of wealthy and powerful Old World men while shockingly being both female and American. Eventually she comes to the conclusion that the best role she can play now is that of princess… and while it may look like a supporting role, Grace ensures that, as Hitch advised her, she doesn’t “stand too close to the edge of frame.” The personal becomes, quite literally, political for her. Dahan deploys a slightly heightened sense of reality — such as the use of 60s-era rear-projection for a driving scene — and plays around with sometimes uncomfortable filmic devices, like using almost bizarrely extreme closeups on faces to distinguish, I suspect, the “image” of royal from the human frailties and frustrations behind it. These don’t always work. But the reminder that no one should misunderestimate a woman, and that she will use what limited amount of influence is allowed her however she can? Still vitally necessary. 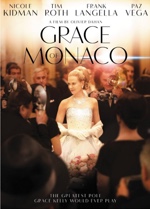 When you purchase or rent almost anything from Amazon US, Amazon Canada, Amazon UK, and Apple TV, Books, and Music (globally), you help support my work at Flick Filosopher. Please use my links when you’re shopping. Thank you!
Grace of Monaco (2014)