I was never a particular fan of the Beach Boys, so I had no idea that there was such a dramatic story at the heart of the band… and as I can attest, you do not have to be a fan to find this intense, often uncomfortable portrait of Beach Boys leader Brian Wilson utterly gripping. Though you may end up a fan by the end, as I did. *runs to iTunes to buy music*

This unconventional biopic focuses on an artist’s music in a way unlike any other similar film I’ve ever seen. It may be an overwrought cliché to connect madness and creativity (and often that’s simply outright wrong), but Love & Mercy goes way beyond the trite to give us a peek inside Wilson’s mental illness — wrongly diagnosed, as we see here, as paranoid schizophrenia, but seemingly akin to that — to show us how the way his brain was misfiring led him to make fascinating conceptual leaps in composing. In one scene, a session musician, scanning Wilson’s sheet music in bewilderment, wonders if Wilson made a mistake in having different sections of the band playing in different keys. He happily says that it sounds great in his head… and it does when they play it, too.

Watching a song come together — such as the genesis of what became a huge hit in “Good Vibrations” — is thrilling here. Seeing the agony that often accompanied the creativity is hair-raising. For Wilson’s terror as his illness progresses is palpable: the look on the face of Paul Dano (Youth, Prisoners), as the younger Wilson, as he perceives strange sounds and unknown voices in studio headphones, is one of the small great moments in his astonishing performance. (Dano does some of his own singing, too, but I couldn’t tell which was him and which was old recordings of Wilson, he’s that good.) There is joy as he labors over constructing rock symphonies — such as what would become the critically acclaimed album Pet Sounds — but his descent into emotional and psychological turmoil is authentic and painful to watch, and to hear. The dinner party scene, at which he is tormented by the clacking of silverware! The questions about whether his lyrics are about drug use! (We know, with our hindsight, they merely reflect the disquiet in his head.)

Intercut with the 60s-era onset of his sickness are the 80s-set sequences during which an older Wilson — and a much sicker and scarily powerless man — gets help from a new friend to break free from a controlling Svengali psychologist, played by a terrifying Paul Giamatti (Straight Outta Compton, San Andreas). In an unexpected but clever bit of cinematic sleight of hand, the older Wilson is played by John Cusack (Maps to the Stars, Drive Hard), who looks little like either an aged version of Dano or the real Wilson, but who beautifully captures the musician’s vulnerability and creative resurgence. (Elizabeth Banks [The Hunger Games: Mockingjay – Part 2, Magic Mike XXL] as the new friend is also fantastic, and gives a standard supportive-girlfriend role real kick.)

Only the second film from director Bill Pohlad, and his first in 25 years (he’s primarily a producer), and with a smart, assured script by Oren Moverman (The Quiet Ones) and Michael A. Lerner, Love & Mercy is a masterful reflection of its subject both in story and in form. One of Wilson’s bandmates says of the music he writes as his illness begins to take its grip that “even the happy songs are sad”… and that works well to wrap up this poignant and powerful movie as well: happy and sad all at once.

See also my #WhereAreTheWomen rating of Love & Mercy for its representation of girls and women.

I was mostly ambivalent to The Beach Boys but I dragged my mom to see this movie because I knew about the whole story, and I could tell she was like “really? The Beach Boys?” (She’s slightly too young to have thought the Beach Boys were cool in her youth). And then by the end of it, she was all, “…well, I wasn’t expecting that.”

i always loved the Beach Boys… i will put this on my “to see” list. 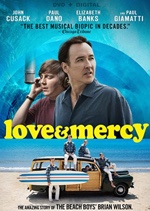 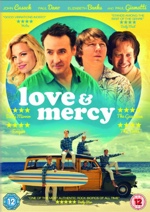 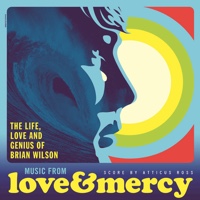 When you purchase or rent almost anything from Amazon US, Amazon Canada, Amazon UK, and Apple TV, Books, and Music (globally), you help support my work at Flick Filosopher. Please use my links when you’re shopping. Thank you!
Love & Mercy (2015)