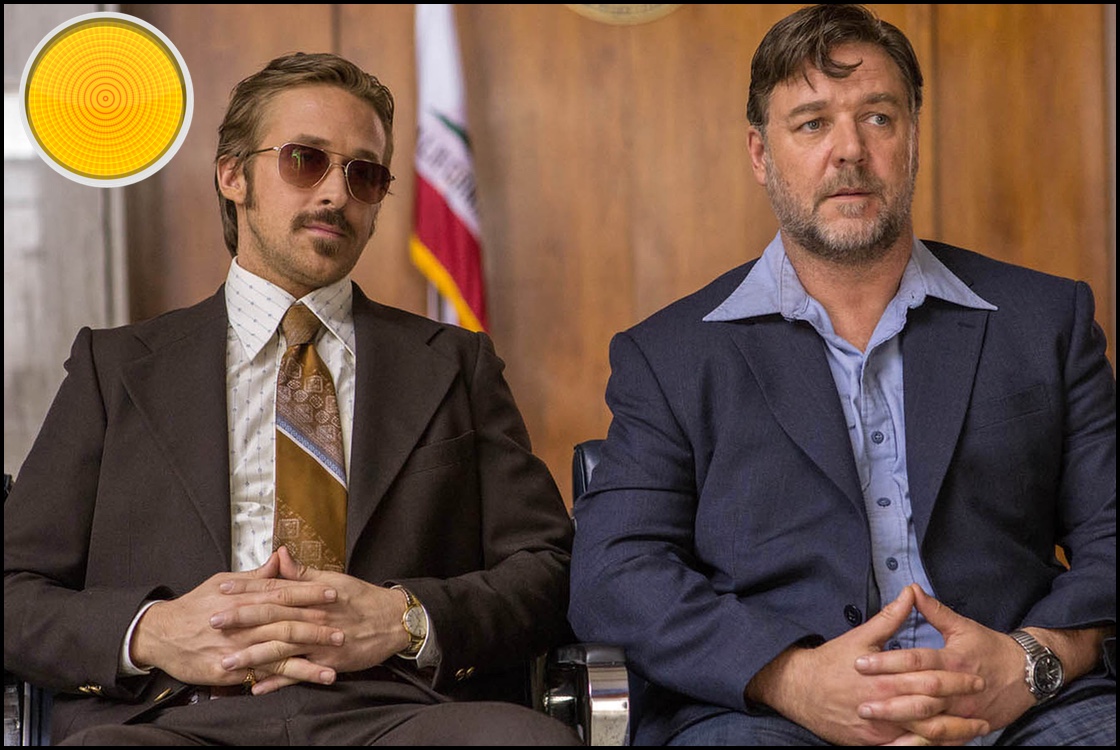 Two fun characters played by two great actors with fantastic chemistry together go in search of a movie, and — spoiler! — never quite find it.

Holland March (Ryan Gosling: The Big Short, Gangster Squad) is a private eye in 1977 Los Angeles; he’s not very bright yet somehow has an apparently thriving business, perhaps because he’s stupidly charming. World-weary Jackson Healy (Russell Crowe: Fathers & Daughters, The Water Diviner) beats people up for money, including, sometimes, private eyes, if the pay is good enough. That’s how these two meet, and end up, for convoluted and not very convincing reasons, working together on a case that isn’t what the script thinks it is. No, what happens in The Nice Guys is that two fun characters played by two great actors with fantastic chemistry together go in search of a movie, and — spoiler! — never quite find it.

The film’s title is twofold ironic: March and Healy are not that nice, as the poster unnecessarily informs us — we pretty much got that on our own — but it also works in a metaphorical way to represent the movie on the whole, as a would-be joke that’s not actually funny and kinda doesn’t apply anyway (no one they encounter would or does mistake these two for “nice guys”). As they drive around smoggy Los Angeles in search of the only ever briefly glimpsed Amelia (Margaret Qualley: Palo Alto) — a human macguffin! — I kept waiting for the punchline

. Not literally, mind; I wasn’t waiting on a literal joke, but for this scattershot two-man character study to come together in some satisfying way. And it never does.

Some of The Nice Guys is mildly amusing, like Gosling’s physical comedy as March attempts to threaten Healy with a gun while sitting half naked on a public toilet; Gosling shows off some comic chops here that we haven’t seen in him before. (Crowe’s drolly underplaying a heavy like Healy brings a humor to the character that may not have been in the script, and that’s a newly fresh side of this actor too.) But more often we get throwaway setups for jokes that demand resolution and never get it, as in the bit in which March greedily accepts a noncase looking for a man who is obviously dead, hired by his widow, who frets that her husband has been missing “since the funeral.” There’s gotta be a funny story in how March resolves this, some sort of clash between his mercenary tendencies and his seeming desire not to be outright cruel to the woman, but we don’t get that. It’s pretty frustrating. And then there’s March’s tween daughter, Holly (Angourie Rice: These Final Hours, Walking with Dinosaurs), who is a smart cookie — smarter than her dad, for sure — with some good investigative instincts, yet the most significant part she is allowed to play is as damsel in distress to prod March into action. So predictable, and so dull.

It’s almost as if Shane Black — directing his third feature, after Iron Man 3 and Kiss Kiss, Bang Bang, and cowriting with first-timer Anthony Bagarozzi — is trying to stretch a five-minute comedy sketch into a two-hour movie. Almost the entire plot is rushed into the last 30 minutes or so, almost as an afterthought; in fact, it’s less a plot than an attempt at an explanation for all the meandering that has come before. But hey, please accept this waka-chicka soundtrack, some goofy 70s wardrobes, and a pair of dead naked porn-star boobs — yes, really, goddammit — as atmosphere and distraction along the way. That’s nowhere near enough. The Nice Guys comes up disappointingly short of the sharp and clever it clearly hopes to be 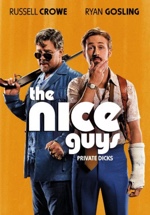 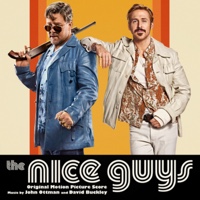 When you purchase or rent almost anything from Amazon US, Amazon Canada, Amazon UK, and Apple TV, Books, and Music (globally), you help support my work at Flick Filosopher. Please use my links when you’re shopping. Thank you!
The Nice Guys (2016)