MaryAnn’s quick take: Filmmaker Amy Seimetz evokes a taut, cursed mundanity, an allegorical contemplation of culture at its most basic level: when it fails and everyone is hopeless. Accidentally hits our pandemic mood.
I’m “biast” (pro): I’m desperate for movies by and about women
I’m “biast” (con): nothing
(what is this about? see my critic’s minifesto)

It took me a while to warm up to She Dies Tomorrow. I mean, for what seems like too long a time it’s just 20something Amy (Kate Lyn Sheil: House of Cards, Listen Up Philip) wandering around mopily announcing to everyone she speaks to or sees that she will be dying tomorrow. Is she sick? Did she just get, I dunno, a cancer diagnosis or something? It didn’t seem to be anything like that, and honestly, it was feeling a bit like a too-strained metaphor for depression, perhaps, and I could not see where it could go.

But I’m glad I stayed with it, and let myself be drawn into Amy’s quiet distress, and into the mood of taut, cursed mundanity that writer-director Amy Seimetz evokes. Because just when it’s all on the verge of being too much, and too little — which I am going to presume was Seimetz’s plan — everything changes. And we begin to see that Amy’s conviction (delusion?) is contagious, as others, such as her friend Jane (Jane Adams: Poltergeist (2015), The Brave One), begin to share this delusion (conviction?) and spread it further to others. Merely by saying, with a great stoical sigh, “I’m gonna die tomorrow, I just know it,” or some variation thereof.

Now, no one is panicking: everyone is merely suddenly, instantly resigned to this fate, about which they are in no doubt. Everyone is downright philosophical about their impending doom, in fact, to the point of being prompted to make some startling admissions about where they are in their lives right now, and where they want to be at the very end. It’s as if we’re immersed in the usually unseen background hum of a global disaster movie, when everyone has accepted that the big asteroid is gonna hit tomorrow because the heroes trying to save the world have failed. All bets are off, and all social niceties may be dispensed with. In this way, She Dies Tomorrow reminded me a little of Don McKellar’s underappreciated Last Night, and a little bit of the apocalyptic rom-com Seeking a Friend for the End of the World.

Except there’s no actual end-of-the-world in the offing here… at least not that we ever see. The ambiguity of She Dies Tomorrow is its greatest asset, and renders this less a disaster movie than an allegorical contemplation of culture at its most basic level: when it fails. What do we expect of the world in which we live? How do we cope (or not) with dismal prospects? What happens when everyone is hopeless? Seimetz created her tapestry of melancholy misery pre-pandemic, but somehow she predicted exactly the grim futility of 2020. Oddly enough, there’s something sorta comforting in that, in the same way that picking at a scab or pushing through the pain of an injury gives you at least the illusion of control over something ugly and awful that is out of your hands. 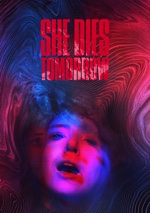