We’ve seen children grow up onscreen before. Ron Howard. Jodie Foster. All the Harry Potter kids. But not like this. Not in a single film. Richard Linklater had the audacious idea to shoot a story about almost the entire span of one boy’s childhood using the same actors over the course of a dozen years. Audacious because such a long production time — probably the longest ever in the history of cinema — comes with unique challenges. (The most dramatic one might be: What if one of your actors dies midway? Recasting would have ruined the beautiful authenticity the film aims for, and achieves.) Audacious because in retrospect, it seems like such an obvious idea, and yet either no one thought of it before or no one had the nerve to try it.

So screenwriter and director Linklater (Bernie, Me and Orson Welles) — partly making it up as he went, I suspect — shot for a week or so every year between 2002 and 2013 to tell the beginnings of the life story of Texan Mason, from age five through age 18, leaving him just as he is going off to college. (This is a more adventurous follow-on to his trilogy of films about Jesse and Celine, revisiting their lives after decade-long intervals.) His star, Ellar Coltrane (Fast Food Nation), is actually a little bit older than Mason — it appears he was seven or eight when filming began — but that’s no matter: we see him grow from adorable little-boyness through awkward tweendom and into a poised, intelligent, handsome young man about to embark on his own independent life. And by “him,” I mean both Mason and the actor: the two are inseparable here. As Mason’s older sister, Samantha, is inseparable from actress Lorelei Linklater (the filmmaker’s daughter, who is actually only a few months older than Coltrane). And by “inseparable,” I mean in that achingly bittersweet way that only gets more poignant the older we adults get: Kids grow up so fast!

I mean, 2002 is not that long ago. I haven’t changed, but these kids turned into grownups overnight. How is that possible?

Despite the film’s restrictive rating on both sides of the Atlantic, there’s nothing in Boyhood that’s inappropriate for tweens and teens who might be interested in seeing a story that will look more like their actual lives than anything else they are likely to find at the movies. But this is a film for an adult’s nostalgia — look at those colorful iMacs! oh my goodness, a Harry Potter book-release party! — and an adult’s appreciation of speed with which life passes by, and how much messy complication and genuine wonderfulness can be crammed into swiftly disappearing years. Cinema’s capacity for compressing time has never been used like this before, and what could have been a mere gimmick, however ingenious, instead works in exactly the opposite way, creating a profound sense of the passage of time by uniquely marking it in a way we’re all familiar with yet haven’t seen before onscreen.

There is endless drama in Mason’s life thanks to his parents, who are no longer together: Mom’s (Patricia Arquette: Holes, Human Nature) life is her own adventure of romantic troubles and ongoing educational and career advancement, and Dad (Ethan Hawke: The Purge, Before Midnight) is a less steady presence if never one too far away. But few of the events we see Mason go through are momentous, and only occasionally is there any sense that he is moving consciously toward something, anything. One scene with his high-school photography teacher acts as a gentle kick in the butt to kid who often seems directionless, and it’s late in the film, as Mason, who is smart and sensitive, begins to be able to articulate his outlook on the world that Boyhood finds a larger place for itself as an accidental commentary on the directionlessness of America. If the American dream — any American dream — still exists, it certainly doesn’t seem to have made itself known to Mason. And yet it’s with a hopeful optimism that we leave him: he’s still figuring himself out, but he seems confident that answers are to be found, even if he doesn’t quite know what the questions are yet.

So this is it: Richard Linklater has made the ultimate this-boy’s-life movie (with a side dish of early-21st-century American time capsule). It’s a lovely, thoroughly engaging film; it runs almost three hours but it doesn’t feel anything like that. The apex of the genre has been reached. Boyhood cannot be outdone. We have peak appreciation of what it means to be a little boy growing up into a young man.

Everyone can start making movies about little girls and the challenges and wonders of their lives now.

See also my #WhereAreTheWomen rating of Boyhood for its representation of girls and women. 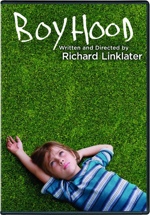 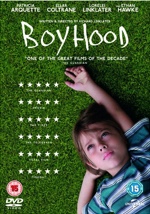 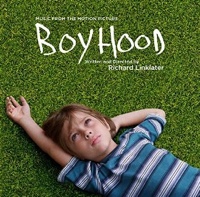 When you purchase or rent almost anything from Amazon US, Amazon Canada, Amazon UK, and Apple TV, Books, and Music (globally), you help support my work at Flick Filosopher. Please use my links when you’re shopping. Thank you!
Boyhood (2014)

MPAA: rated R for language including sexual references, and for teen drug and alcohol use
BBFC: rated 15 (strong language, sex references, drug use)