Quick takes from the 25th Raindance Film Festival, with public screenings in London through October 1st, 2017.

British filmmaker Jason Wingard went to the Jungle, the refugee camp in Calais, intending to make a documentary about life there. But after befriending those living in squalor out of desperation, he decided to make a narrative based on their stories instead, shot in the Jungle and with some of them playing versions of themselves. The result is an astonishingly moving film that rehumanizes people who have been dehumanized in public discourse, putting faces to the still-ongoing refugee crisis and inescapably reminding us that those we’ve Othered are not very different from us. “In another life,” Syrian refugee Adnan (French actor Elie Haddad) tells us in the touching narration through which we follow his journey, “I was a teacher.” His new friends in the Jungle are other middle-class people from such far-flung places as Sudan, Eritrea, and Iraq; they all share English as a common language and the dream of a normal life again. But they are “trapped”: they cannot go forward — onto the UK is the goal — and they have nowhere to go back to either. (Sometimes someone will disappear, and the whispered optimism is that “maybe he crossed,” found a way onto a truck or a train heading to Dover.) In flashbacks we experience the horrors of Adnan’s journey to France, with his wife, Bana (British actor Toyah Frantzen)… but where is she now? Is she even still alive? The stress and the uncertainty that Adnan and his friends live with is achingly palpable, from their terrible memories — one man’s story about being unable to save a baby on an overcrowded dinghy crossing to Europe is heartrending — to the cruelty of the French locals and police, who seem to thrive on dishing out humiliation to the refugees. The traffickers are worse still, preying on their misery. Some people are kind, though, and brief moments of compassion fuel hope, and might be the only thing keeping Adnan from losing his moral grounding entirely. In Another Life made its World Premiere at Raindance, in competition, and won Best UK Film. It’s a startling and unsettling admonishment to those of us who won “the lottery of life [that] decides your passport” not to judge the losers as harshly as some of us have.

Ten sex scenes. That’s all Hello Again is. There’s no story. The characters are only generously called cardboard. They sing their way through their cringe-inducing encounters — yes, this is a musical — and the terrible songs are replete with on-the-nose lyrics that simply tell us the actions we are already witnessing: the songs illuminate nothing, offer no commentary, and introduce no depth, though often they are hilariously terrible (“I’m morally bankrupt!” one woman sings plaintively). There is nothing seductive here, nothing in the least bit sexy. I’d call it bad porn, but even the sex itself — which is, I repeat, all that is happening here — is coy and hidden out of frame or under sheets. The scenes take place in New York City (or near enough) from 1901 to 2002, between people sometimes played by actors we’ve seen in other times, but the temporally separated characters are not connected in any way: we’re not meant to believe these are, I dunno, the same souls reenacting their wretched sex lives across the century or anything. (Of, if we are, the movie fails miserably here as well.) Some of the scenes do indeed feature scenarios out of bad porn, like the one with the sexy nurse who ravages her patient, or the remake of Titanic that involves a first-class passenger hiding the fact that the ship is sinking from the young man from third class he has picked up for the evening. (I snorted aloud when I realized that the movie was actually going there.) Based on the 1994 off-Broadway musical by Michael John LaChiusa — which was in turn based on the then-scandalous 1897 German play Der Reigen, by Arthur Schnitzler — and directed by Tom Gustafson, Hello Again appears to believe it has something poignant and universal to say about love and sex, but it hits not one plausible or emotionally authentic note, even given the presence of actors who should have been able to pull that off, such as Martha Plimpton (Remember Me), and Broadway stars Cheyenne Jackson (Lola Versus) and Audra McDonald (Beauty and the Beast). Cheap and sleazy but not in a good way, this movie reduces human desire for contact and connection to an embarrassingly awkward and stilted pantomime. 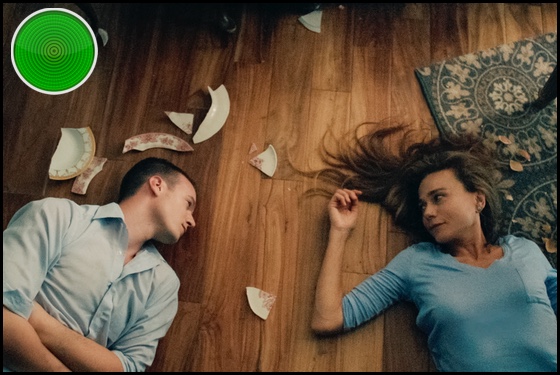 “A monstrous woman isn’t sympathetic.” This novelist and poet Maya Dardel knows, and she — and this movie about her — is here to challenge that. Monstrous men, after all, frequently engage our sympathy… or, at least, it is expected that they will, certainly in literature and cinema. With her brutally sharp performance, Lena Olin (The Reader) molds Dardel into a cranky, arrogant figure who wouldn’t shock us if she were a man, but as a woman, her daring to be so is a clear provocation. As is the disturbing act that opens her story: she announces on a live National Public Radio interview that she will soon commit suicide, and in the meantime will consider applications from young writers to serve as the executor of her will and to take over responsibility for her reputation and her legacy after her death. “Women need not apply,” she states on NPR. “I don’t like women writers.” (Is this another provocation? Or does she really believe this?) The American writing and directing team of Zachary Cotler and Magdalena Zyzak set Dardel’s existential odyssey entirely in and around her home in the Santa Cruz mountains overlooking Silicon Valley, creating a cocoon of isolation and egotistical self-reinforcement as Dardel entertains a succession of supplicants, testing them intellectually — mostly by puncturing their bullshit literary pretensions — and also sexually, as if to probe how well they understand women on the most fundamental level. (She asks one if he “believe[s] in the very real mental existence of women,” as if it were not a given. Women know it so often seems not to be.) As Dardel narrows the possibles down to brash Paul (Alexander Koch) and gentle Ansel (Nathan Keyes: The Kings of Summer) — and tests them even further with the help of her hilarious friend and neighbor, Leonora (Rosanna Arquette: Frank & Lola) — Maya Dardel’s feminist boldness crosses into the exhilarating. This is an unapologetic dare to accept a woman, with all her genius and all her faults — all her humanity — on full defiant display. You do not have to like Dardel as a person, and many will not, but doesn’t she deserve the same respect that we afford difficult, brilliant men?