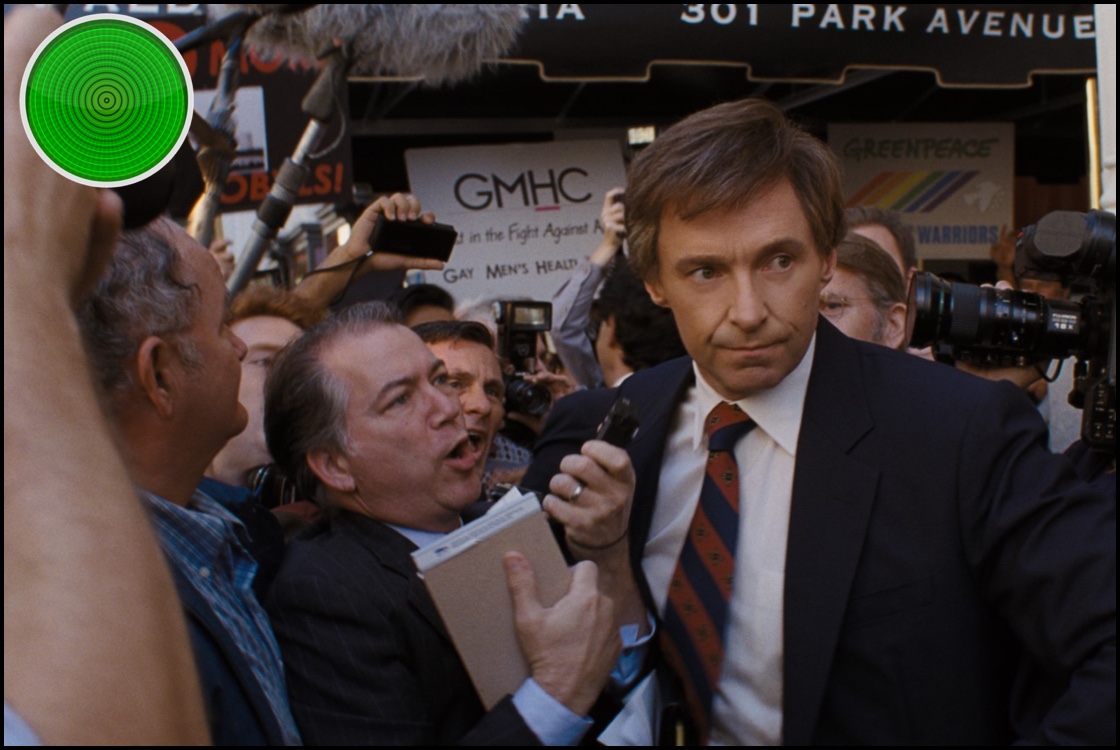 MaryAnn’s quick take…
Snappy Sorkin-esque banter, 80s nostalgia, and Hugh Jackman in a bad wig yet still hot as hell. But also an enraging, ironic look at how a reality-TV resume ended up becoming a legit qualification for the American presidency.

I’m “biast” (pro): love Hugh Jackman
I’m “biast” (con): nothing
I have not read the source material
(what is this about? see my critic’s minifesto)
women’s participation in this film

Today is Election Day in the United States, the most important midterm elections since who knows when. Today is the day when the shitshow that is the *gag* presidency of Donald J. *gag* Trump is repudiated or — god help us — vindicated. Today is the day when we learn whether the nation will continue down the sewer of a rabbit hole that is the Trump presidency or if we will, perhaps, begin to scramble our way out of it.

So it is very fitting indeed that director Jason Reitman’s (Tully, Men, Women & Children) latest film, The Front Runner, opens today. (Well, it opens in New York and Los Angeles. It will go wide over Thanksgiving weekend. You know, to help you digest your turkey dinner. A fun outing for the whole family! *sigh*) This retelling of the story of how Democratic presidential candidate Gary Hart was scuppered, in the final few weeks before the election, in his 1988 bid for the White House by revelations of an extramarital affair is extremely relevant, an enraging yet ironic reminder of how we got to the point where a reality-show host and human garbage dump could possibly be elected fucking leader of the free world*. (*offer no longer available)

Gary Hart was not a human garbage dump. As portrayed with compassion but also more than a dollop of causticity by Hugh Jackman (Logan, Eddie the Eagle), Hart here is a complicated, flawed, but probably mostly decent man, at least grading on the curve of male politicians in the 1980s. He was very progressive politically, all about the “big ideas” that would lead America — and perhaps the world — into a brighter future. It is almost indisputable that he was going to be president in 1988, and it hardly bears thinking about, what the nation and the planet might be like today if, for just one thing, we had had a pro-environment president in the White House just when the warning sirens were starting to go off about global warming. (James Hansen had given his “Bin Laden determined to strike in the US” climate-change testimony before the Senate earlier in ’88.)

But. The world was changing in 1988. JFK got away with his mistresses in the 1960s, and we can argue all day about whether he would have gotten away with that if the media had reported on it, if the culture of white-male journalism hadn’t protected one of their own. The fact remains that, for better or for worse, things were different by 1988, and, as we see here, Hart either couldn’t or wouldn’t acknowledge this reality. Suddenly — like, out of the blue — Americans cared whether their leaders were fucking gorgeous blondes who weren’t their wives. (Vera Farmiga [Boundaries, The Commuter] plays Hart’s wife, Lee. She is awesome, as always.) Probably only for the salacious entertainment of it, but still. For whatever reason, the new reality was that “gossip is front page news,” and even respectable, mainstream journalism had become a race to the bottom. As soon as one paper goes there, whatever awful place there is, the others have to follow because news is a for-profit enterprise constantly chasing audiences, even if it shouldn’t be.

It hardly bears thinking about, what the world might be like today if the progressive and pro-environment Hart had been elected US President in 1988.

Honestly, I’m not sure I’ve ever felt so much emotional but also geeky-wonky see-sawing as The Front Runner evoked in me. For two movie hours I was all:

• This is so unfair to Hart! What difference does a consensual affair really make?
• Fuck yes it matters, this dude is running on ethics and integrity but he cannot even be faithful to his wife? Can’t even keep it in his pants until Election Day?
• But who can say what goes on in a marriage, and isn’t monogamy a bourgeois scam anyway?
• But is it the media’s place to become tabloid scolds?
• But what an arrogant prick Hart was, daring reporters to follow him around, challenging them to dig up dirt on him!
• But why didn’t serious journalists focus on the serious issues that would impact the country in serious way?
• But doesn’t personal character matter? Yes it does.
• *argh*

And the great thing is that the movie gets this. It grapples with this back and forth, back and forth. I like that Donna Rice, Hart’s supposed girlfriend, barely appears here at all — because none of this is about her — and when she does (played by Sara Paxton: The Last House on the Left) it’s purely to suggest that she got a raw deal; I like that there’s a Washington Post reporter (a woman) who is upfront, at the end of the film, about how she doesn’t “think [Hart] respects women” as a contrast to the generally positive portrayal we’ve seen so far. The Front Runner walks a fine line between acknowledging that attitudes were different then and acknowledging that those attitudes weren’t great, either, even then. I like that The Front Runner doesn’t ever pretend that there are any simple solutions to this mess that we all have contributed to making, and that part of the problem is that many of us feel like we had no control over the making of it.

And now this transformation of politics into a game show has come if not full circle then perhaps full spiral. We have gone from killing, over consensual sexytimes, a mostly good man’s leadership that most likely would have been good for the country to being okay with a terrible man’s creepy AF metaphorical and actual assaults on women, a terrible man who is a terrible leader and who is dragging the nation down, because… why? Because he’s entertaining? I mean, even if we wanted the tabloidization of politics, how did we end up here?

The transformation of politics into a game show has come if not full circle then perhaps full spiral with Donald Trump.

The Front Runner is based on the book All The Truth Is Out: The Week Politics Went Tabloid by Matt Bai — who wrote the script with Reitman and Jay Carson (a House of Cards producer) — and if you’re just looking for some political cinematic sexytimes, it is all here for you: the snappy Sorkin-esque walking-and-talking banter, the brick-sized mobile-phone nostalgia, Hugh Jackman in a bad wig yet still hot as hell. There is the great cast: Jackman and Farmiga and Alfred Molina (Secret in Their Eyes, Strange Magic) as Ben Bradlee — the Washington Post executive editor, who I guess we need to partially blame for turning American politics into “reality entertainment” — and J.K. Simmons (Justice League, The Snowman) as Hart’s campaign manager Bill Dixon, who can do whatever he wants to do because he’s J.K. Simmons.

But this movie is more important than mere entertainment. It’s a kind of heaving sigh, a throwing up of collective arms, at the state we’ve let ourselves get into. It’s an indictment of hypocritical men who think they can have it all, and an indictment of an electorate who shouldn’t complain about getting the leaders we deserve. It’s a bit despairing, in fact, on this Election Day. It’s like witnessing a cultural tsunami and knowing there’s no way to stop it. How could any of this have happened? And, worse, what are we letting happen today that is going to look even worse 30 years down the line? 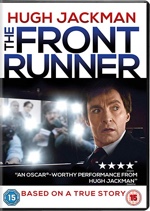 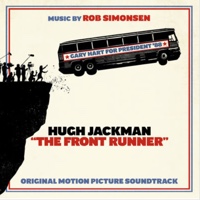 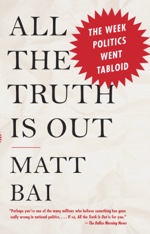 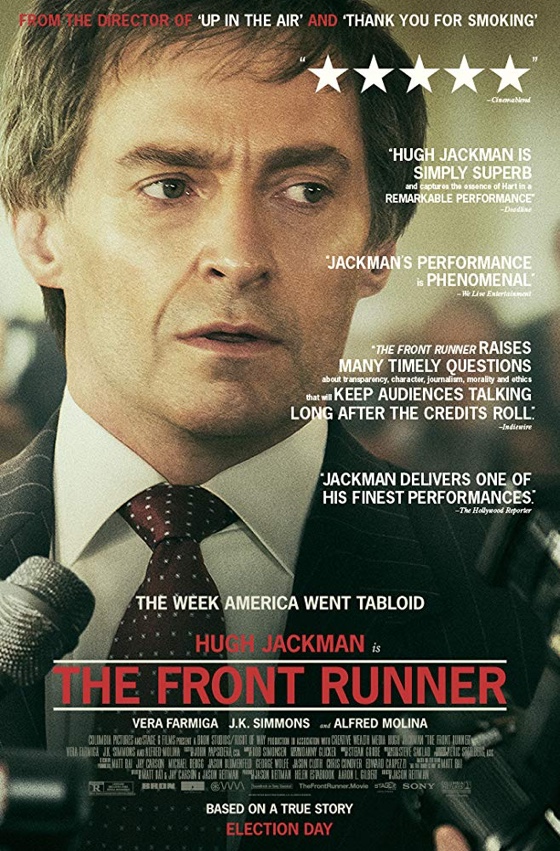